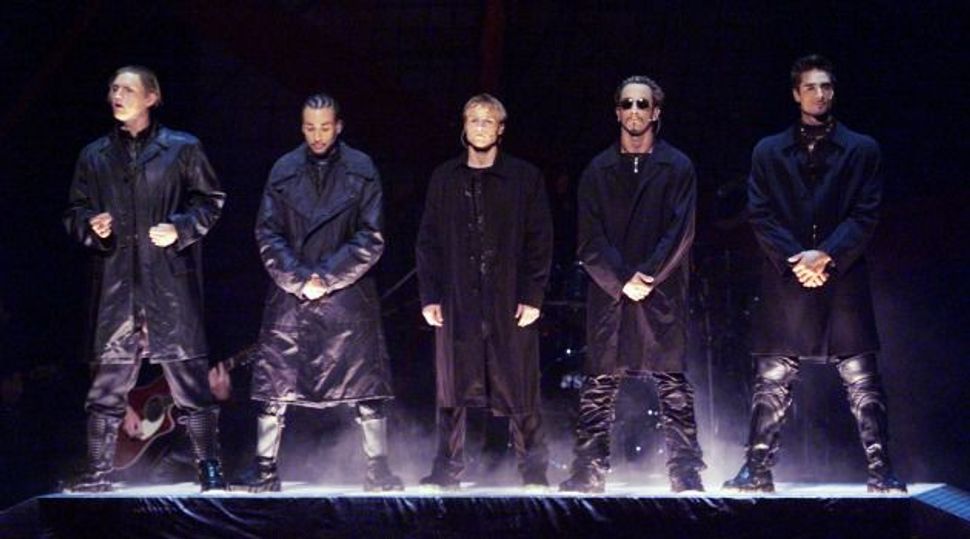 Boyz 2 Jewz: Congregations without cantors can sometimes resort to using melodies by pop groups, such as the Backstreet Boys Image by Getty Images

I doubt many of the attendees at Kehilat Hadar’s Upper West Side Yom Kippur services, at which the “Lamedvavnik Niggun” made its debut liturgical appearance last fall, knew the story behind the tune.

I do, because I cooked it up with Aryeh Bernstein, who leads high holiday services at Hadar. We borrowed the melody from the Wu-Tang Clan’s hip-hop classic, “C.R.E.A.M.” (“Cash Rules Everything Around Me”). Our choice of the name “Lamedvavnik,” a Yiddish term for the 36 hidden saints on whom the world depends, alludes to the 1993 studio album on which “C.R.E.A.M.” appeared, “Enter the Wu-Tang (36 Chambers).”

Bernstein does not mind the worshippers’ ignorance. Though he sometimes matches liturgy to thematically appropriate soul tunes (pairing, for instance, a dark, moody poem in Yom Kippur’s final service with Prince’s “There is Lonely”), he would prefer the “Lamedvavnik Niggun” remain innocuous. I agree. It is probably better that no one, on hearing Bernstein sing words that mean “The Lord shall reign forever, Your God, O Zion, from generation to generation, Hallelujah,” be reminded of Wu Tang’s Raekwon rhyming, “No question I would speed/ for crack and weed/ The combination made my eyes bleed.”

For every hidden flourish of aesthetic genius, countless borrowed nonliturgical tunes — a musical technique called “contrafactum” — can be easily recognized. In my circles, Leonard Cohen’s “Hallelujah” is a ubiquitous setting for Psalm 146 on Shabbat morning, and the chord that Cohen played is anything but secret. But while “Hallelujah” declares, “There’s a blaze of light in every word/ It doesn’t matter which you heard/ The holy or the broken Hallelujah,” doesn’t Jewish prayer depend on making just those distinctions? We bless God for separating holy from profane, not for conflating them. To a traditionalist, foreign music can carry with it alien theology, and pop tunes can puncture or trivialize sacred space.

The question matters in part because contrafactum is, increasingly, how Jews pray today. Examples abound. Ben Dreyfus, for instance, who claims credit (with Shir-Yaakov Feinstein-Feit) for adapting “Hallelujah,” also explains and justifies in detail a Friday night service he organized with tunes from an R.E.M. album. (Translated into alt-rock, a typical line from Psalm 96 apparently reads, “a candy bar, a falling star, or a reading from Dr. Seuss.”) Chabad Chasidim, following their late Rebbe, sing “Ho’aderes V’hoemunah,” a hymn expounding the majestic grandeur of God, to [the tune of the French national anthem][4].

And while they, like Bernstein, attend to thematic parallels, many people source less scrupulously. Those I canvassed mentioned tunes from “Joseph and the Amazing Technicolor Dreamcoat,” the Beach Boys, the Backstreet Boys, and the Somali singer K’naan, as well as “Pachelbel’s Canon in D,” to name a few. American Jews, especially the younger ones, often pray without professional cantors or fixed musical traditions, and want communal singing. If we are not repurposing Shlomo Carlebach or Debbie Friedman, we usually borrow from popular culture.

Rabbinic texts on liturgical borrowing are themselves polyphonic and not always easy to harmonize. A source in the Babylonian Talmud (Sanhedrin 101a) declares that one who “reads a verse from the Song of Songs and makes it a song… brings evil to the world,” and Maimonides, in a puritanical premodern listicle, gives five reasons to condemn Arabic love songs. Indeed, a strain of the tradition frowns upon all nonliturgical music, period. But the late, great legalist Ovadia Yosef, directly addressing borrowed melodies, argues that the condemnatory sources are about foreign words, not music (Y’chaveh Daat 2:5). He writes, “To sing holy songs in a tune composed as the music for love songs — it seems there is no prohibition in this at all.” His responsum cites not only halakhic authorities but also the use of Arabic tunes among Mizrahi Jews.

What would R. Ovadya say about contemporary contrafactum? It is not clear, since he is defending a venerable practice, not recommending innovation. “In the course of time, the words of the love songs were forgotten,” he writes, “holy songs remained in their place, and they have already crossed from the evil side to the side of holiness.” And similar logic motivates the Central Conference of American Rabbis, the main authority for the Reform movement. In a 1991 responsum, they permitted a temple in Los Angeles to use an Israeli melody “popular with our young people,” even though “the words which accompany it are rather wild,” while discouraging the tune’s use “in an Israeli setting,” where the words could be recognized. So the “Lamedvavnik Niggun” may be allowed to sneak in among hip-hop illiterates, but the Backstreet Boys are probably out.

Of course, today’s traditional tunes often originated in non-Jewish cultures. The tune for the Hannukah poem “Ma’oz Tzur,” which celebrates the defeat of Greek assimilation, has its origins in a German folk song. And the melody may have come to the Jews by way of Martin Luther, who enthusiastically adapted German drinking music to spread Protestant theology. Similarly, Ashkenazic trope for Lamentations is indistinguishable from contemporaneous, medieval Gregorian chants. As a child, I was taught to chant the Shabbat afternoon service with a 1950s advertising jingle for a cereal called “Crispy Critters.” Jewish music, like Jewish cooking, is necessarily hybrid. (As is all music: The Wu Tang Clan, in “C.R.E.A.M,” were themselves borrowing from The Charmels’ 1967 “As Long as I’ve Got You.”)

Indeed, some bristle at the Jewish purity implied by my question. “With all due respect,” Rabbi James Ponet, Jewish chaplain at Yale, wrote to me, “what dos’t thou mean by ‘non-Jewish tune?’… Is Dylan singing ‘Like a Rolling Stone’ or ‘Blowin in the Wind’ Jewish? Did you say ‘secular culture?’ Is Beethoven’s Pathetique secular?”

Many people from whom I solicited examples countered by asking how I was counting the tune to “Hatikvah,” which is commonly used for a passage about the ingathering of exiles. Several expressed concern lest I excommunicate “White Christmas,” written by Irving Berlin, who was Jewish. Lurking under these examples is suspicion about fixed identities. After all, if a Jew can write the definitive American Christmas carol, why not bring the Wu Tang Clan to Yom Kippur?

I appreciate these objections. Still, I am upset to hear, as I did recently, the Musaf Kedushah, a quasi-mystical imitation of an angelic choir, sung to “Somewhere Over the Rainbow.” Don McLean’s reaction to the Rolling Stones — “As I watched him on the stage,/ My hands were clenched in fists of rage” — is putting it a little strong, but I share his visceral hostility to perceived musical barbarism. Why? Well, putting aside questions of identity or authenticity, I think that Hollywood cotton candy cheapens profound mysteries. I will pray Musaf every week as long as I live, and the words reach beyond my individual practice, into the ineffable deeps of communal history. “Somewhere Over the Rainbow,” by contrast, is charming, if your taste runs to sentimental Americana, but ultimately dispensable.

To be clear, I am skittish about contrafactum only situationally. Were I leading a group of LGBT Jews, I would love to sing “Mi khamokha,” which is about redemption, to the tune of “Somewhere Over the Rainbow,” which has a long history as a queer anthem. In that context, the song’s hopes for a brighter, lighter future express an oppressed community’s yearning for liberation — a perfect match for the splitting of the Red Sea. Pairings like that do not shortchange prayer. Quite the opposite, they tap into our shared emotions and commitments, letting us reach the place where, as Judy Garland sings, “the dreams that we dare to dream really do come true.”