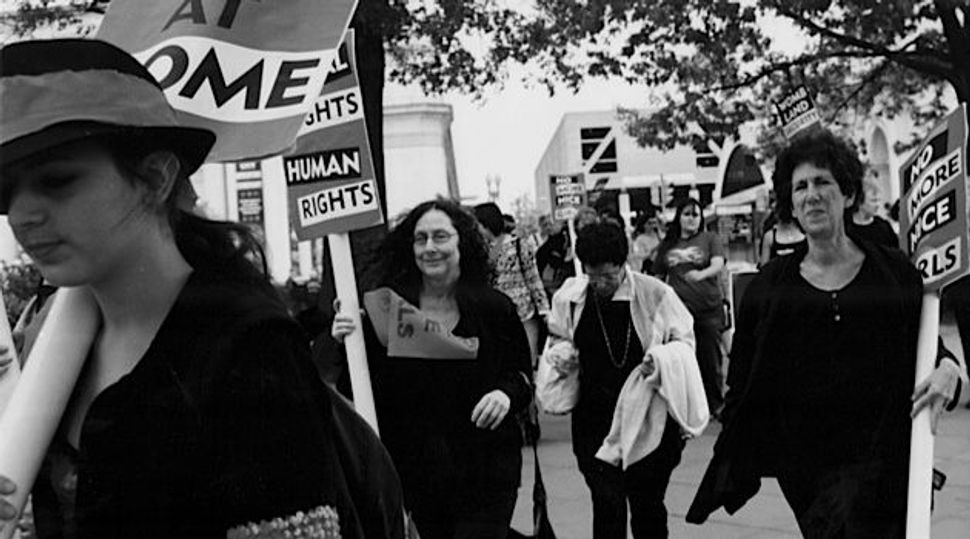 On The Move: Ellen Willis at the 2004 March for Women’s Lives, accompanied by her sister, Penny Froman (center) and cousin Judy Oppenheimer (far right). Image by Courtesy of the family of Ellen Willis

Ellen Willis died in 2006, but her voice still echoes in the culture.

Willis was the first pop music critic for The New Yorker, an editor and writer for the Village Voice and Rolling Stone, founder of the Cultural Reporting and Criticism program at New York University and a feminist thinker of some renown. She wasn’t the most famous critic of her generation, but her political and cultural essays retain their relevance decades after they were written.

A few weeks ago I went to a book party celebrating the release of “The Essential Ellen Willis,” published in May by the University of Minnesota Press. The event was held at Galapagos, a modestly swanky venue in the DUMBO section of Brooklyn.

The tone of the evening matched the space. Willis’s daughter, Nona Willis Aronowitz, the editor of the collection, served as master of ceremonies, and selections were read by writers who contributed introductions to the volume: Irin Carmon, Ann Friedman, Spencer Ackerman, Cord Jefferson and Sara Marcus. Other New York media types clustered in the darkness. Tavi Gevinson, the 18-year-old editor of Rookie magazine, was said to be in the building.

There are good reasons for Willis’s popularity. In a moment of feminist confidence — the #yesallwomen hashtag being just a recent example — Willis’s bold, affirmative feminism has more currency than ever. At the same time, with issues such as abortion, contraception and equality in the workplace still unresolved, her critique of cultural conservatism still has its sting.

Plenty of people have written about these aspects of Willis’s work, and about others. Her complex, forceful writing on a range of knotty issues, including pornography (she was against censorship), Zionism (she called herself an anti-anti-Zionist) and psychoanalysis (she was a big fan of Wilhelm Reich), made her a challenging writer. Her insistence on the validity of her own experience, and her oft-repeated demand for freedom and pleasure, made her an exhilarating one.

Willis was a notable rock critic, and when a previous collection of her writing, “Out of the Vinyl Deeps,” was published in 2011, I wrote a piece on that aspect of her career myself. So instead of rehashing the biographical overview, the career summary, the hits and highlights, I’d like to write about something else: what Willis means to me, personally, as a critic. In other words, indulge me for a bit while I talk shop.

When people ask me what I do, I’ll often wind up giving some grand speech about criticism. I’ll say that different kinds of writers express their experience in different ways. Fiction writers re-create the world in imaginary form, while memoirists describe their lives to the reader directly. Critics write about all kinds of subjects, but through the prism of their own experience. Our creativity lies in the space between the objective thing and the subjective encounter, in writing that is about both the world and us. At this point, I’ll usually ask my listeners if they’ve heard of Ellen Willis.

Perhaps more than anyone, Willis is responsible for my aspirations as a critic. Although I never met her, she founded the program at New York University’s graduate school of journalism where I was privileged to hash out such lofty notions for three semesters. Mostly I am indebted to Willis through her writing, and through the possibilities for criticism that it represents.

In her introduction to the volume, Willis Aronowitz writes: “Mom would have a hard time crafting her ‘brand’ nowadays. She was intellectual but not academic. She was a journalist but not primarily an ‘objective’ reporter. She poached from her life and detailed her thought processes without devolving into memoir.”

I would hope that a writer of Willis’s caliber would find her “brand” no matter what. But there’s no denying that her kind of criticism would have a harder go of it today.

Writing has always been a competitive sport — who can say the most, the best, the quickest. But the Internet has changed things. Quicker is quicker, more is more, and best, well, you do your best under the circumstances. Occasionally some website will figure out a new trick — a new way to compose a listicle, or a new way to write a headline — but soon everyone else piles on and the trick devolves into parody. After a while it feels like we’re all just sprinting along at superhuman speed, going nowhere.

Willis illustrates a different kind of ethos. Reading her work, and seeing the esteem in which it is held by others, restores my faith that quality, in thought and in style, counts as much as anything else.

Like all great critics, Willis’s writing rewards reading in bulk. Going through her essays means spending time with her ideas, her intelligence, her expressive yet controlled voice. Reading Willis’s pieces together gives you a sense of her values and of the refinement of her thinking over time. You see her essential principles come to the fore — that however righteous a political position may sound, we need to examine its effect on our lives; that you should question your own experiences but never discount their value; that concern for your own interests doesn’t need to contradict the interests of others.

At the end of her life, Willis was at work on a book titled “Cultural Unconscious in American Politics,” the unfinished portions of which are published at the end of this volume. Here you can see Willis assembling a grand theory of modern civilization, arguing that increasing freedom from patriarchal repression has resulted in authoritarian backlashes — Nazism and fundamentalist religion both enter the picture — but the forces of conservatism haven’t been able to put the proverbial toothpaste back in the tube.

Writing pieces like this — pieces that still stand up decades after they were written — didn’t come easily. Willis was known to have been a scrupulous, exacting writer. According to a caption underneath a draft of an early Bob Dylan essay, she spent seven months composing the piece.

With current economic pressures it’s harder than ever to support this kind of work. Willis felt these forces herself during her lifetime. In a depressingly prescient piece published in 2000 and titled “Intellectual Work in the Culture of Austerity,” she lamented the diminishing support for creative work, the adjunctivization of academia, the shrinking of journalism and publishing, and the demotion of writers to interchangeable “content providers.” Reading her recollections of Greenwich Village in the 1960s, when she could support herself with sporadic writing while living in a $50-a-month apartment, is enough to make any writer struggling with ballooning New York City rents break down and cry.

Of course there are many writers still producing great work. Willis Aronowitz cites the anthology’s contemporary contributors as proof that “in a world where deadlines come by the hour and writing two thousand blog-words a day is the norm there’s still a place for journalism that’s ruminative and not reactive.”

Still, you have to wonder if collections like this one won’t be harder to come by 10 or 20 years from now — if Willis-grade talents won’t be squandered writing thousands of forgettable blog posts.

I feel fortunate to work for a newspaper that allows my colleagues and me to aspire to serious in-depth writing, a newspaper that encourages criticism as a literary form. It’s a rare thing these days, and therefore all the more valuable. It’s something I’m sure Willis herself would have appreciated. Now the task is to live up to her example — and that is no small trick.