‘The Search’ Relives Auschwitz — in Chechnya 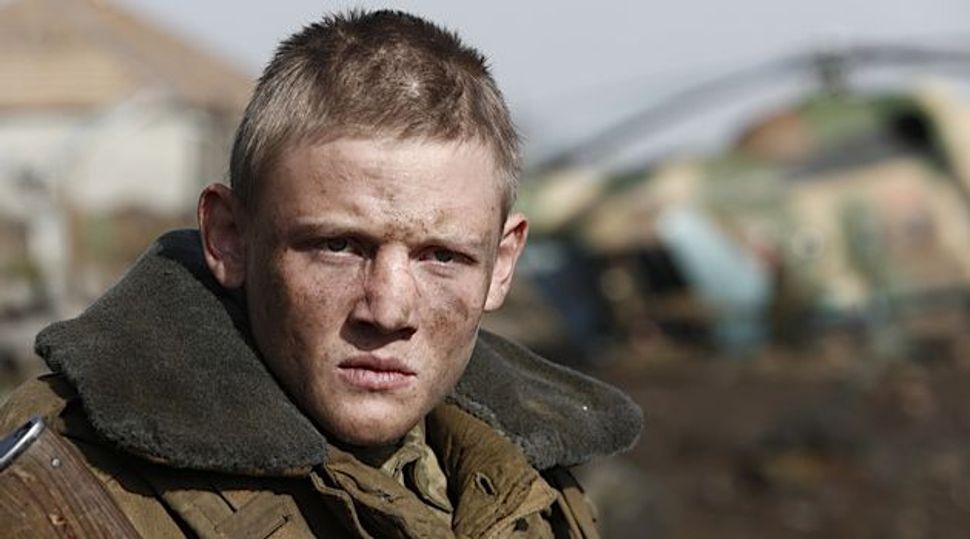 In 1948, Hollywood director Fred Zinnemann travelled to postwar Germany to film “The Search,” a melodrama about a Czech mother and son who survive Auschwitz and look for each other amid the ruins of the Third Reich. The film is best remembered today for Montgomery Clift’s nuanced portrayal of a GI who looks after the war orphan, a role that earned the actor an Oscar nomination. More than 60 years later, Michel Hazanavicius, the Oscar-winning director of “The Artist,” has updated the classic melodrama, setting it in the context of the Second Chechen War in the late 1990s. Hazanavicius’s “The Search,” starring Bérénice Bejo (also of “The Artist” and the director’s wife) and Annette Bening, recently premiered in competition at the Cannes Film Festival, where its visceral realism and searing brutality set it apart from other art house fare that reveled in escapism, lyrical beauty or the intellectual highbrow.

Hazanavicius has said that he wanted to make a film about Chechnya for a long time. “People tend to forget these topical issues,” said the director, adding that his own background as an Ashkenazi Jew whose family survived the Holocaust (his Lithuanian-born grandparents are survivors) made him respond strongly to this much more recent humanitarian catastrophe. In both the 1940s and the 1990s, “people were being massacred yet the international community was indifferent,” he said.

Yet another failure of the international community to respond to a human rights crisis lurks in the background of his film. In 2004, Hazanavicius produced and co-wrote “Rwanda: History of a Genocide,” a documentary co-directed by Raphaël Glucksmann, the son of the philosopher André Glucksmann. “[André] was one of the rare French intellectuals who alerted public opinion to what was happening in Chechnya at the time it occurred. It became quite a personal matter for me,” he said.

Hazanavicius was looking for a narrative approach to the subject matter when his friend and fellow director Nicolas Saada gave him Zinnemann’s “The Search” to watch. “Suddenly I linked that film to my desire to make a film on Chechnya,” Hazanavicius said. “Zinnemann talked about these kids who escaped the concentration camps. At the time, concentration camps were not the key issue discussed during World War II. And through this melodrama, a very humanistic approach very close to the characters, Zinnemann succeeded in talking about the war. And I thought it was an approach that worked well.”

Zinnemann, one of the great directors of Hollywood’s golden age, was born into a Viennese Jewish family in 1907. Early in his career, he collaborated with Billy Wilder, Robert Siodmak and Edgar G. Ulmer on the landmark 1929 film “People on Sunday.” “The Search” was an important and personal project for the director, who learned after the war that both his parents had perished in the Holocaust. It also marked a turning point in his career as a director; the film’s critical and popular success paved the way for his best-known films over the next decade, including “High Noon” and “From Here to Eternity.”

In the original film, a young Czech boy whose experiences in the camps have left him unwilling or unable to remember his own name or mother tongue befriends a young GI played by Clift. As the GI cares for the boy, contacting various agencies to locate any surviving relatives and teaching him English, the child slowly comes out of his shell. As the possibility of finding the boy’s family grows dim, the GI takes steps to adopt the boy and take him to America. The mother’s solitary trek through Europe to locate her missing son furnishes the film’s parallel plot, which merges with the main one in a Hitchcock-worthy climax at a train station.

Zinnemann’s film, while dated in many respects — for example, the moralistic narration — retains its dramatic and emotional force, largely due to its performances and high-contrast cinematography. The mounds of rubble that used to be Nuremberg, Ingolstadt and Würzburg provide the film’s most impressive set pieces: visual analogues to the shattered psyches of the lost and bewildered survivors searching for each other across a post-apocalyptic wasteland.

Hazanavicius shot his film in Chechen villages still haunted by the war. The director explained that the filming was often emotionally trying for the Chechen actors for whom “the story is still very present, very close to them.” The basic outline of the Zinnemann film remains fairly intact, though some details have been changed. The search is undertaken by the boy’s older sister rather than by his mother (their parents are killed in the film’s opening scene, shot on a grainy camcorder). Bejo, who won the Best Actress prize at last year’s Cannes festival for Asghar Farhadi’s “The Past,” is cast in the Clift role as an EU aid worker trying to convince the U.N. of the severity of the crisis. The biggest departure from the earlier film is the introduction of a third plotline involving the making of a brutal Russian soldier whose deathward path contrasts with the Chechen boy’s gradual awakening to life. “I couldn’t show that the Chechens are not a terrorist people, while simultaneously depicting all Russians as Chechen-killers,” the director said at Cannes. “But I did want to show how systems can crush people in order to turn them into killers, and that’s the story I added.” This side plot notwithstanding, Hazanavicius shows surprising fidelity to the original film, down to the individual twists and turns of the climactic train station scene.

“The film is indeed a political one, but I’ve tried to insure that it doesn’t take sides absolutely. It’s not trying to defend a cause. I try to concentrate on the human dimension, because that’s what interests me,” the director explained. “It goes without saying that I wasn’t going to try and be ironic or clever,” he added, contrasting it with “The Artist.” (It was, in fact, the worldwide triumph of that film that enabled producer Thomas Langmann, the son of the late French Jewish director Claude Berri, to secure the budget his director needed.) By eschewing the effervescence and easy charms of his previous film, the 47-year-old Hazanavicius has made a cinematic cri de coeur that might signal a new phase in his career.

Zinnemann, whose films often featured individuals struggling to find their moral courage, was found of quoting Hillel’s famous dictum, “If I am not for myself, who will be for me? And if I am only for myself, what am I? And if not now, when?” A similar spirit of conviction animates Hazanavicius’s film, whose aim is clearly to provoke outrage and indignation at the blind eye that the world turns time and again to human suffering. “When you work at the U.N., I hope one is frustrated by this machine that was created to guarantee peace in the world but which unfortunately fails only too often,” the director said. “I hope that my film will touch all these people.”

A.J. Goldmann is a freelance writer based in Berlin. He is a frequent contributor to the Forward.

‘The Search’ Relives Auschwitz — in Chechnya