They came from a collapsing Ottoman Empire, landed in New York and were sped on their way by Jewish agencies to the verdant Pacific Northwest.

They arrived in Portland and built a small community that in many ways replicated the village and small city life they abandoned along the shores of the sun-kissed Mediterranean.

These Jews from Turkey, Rhodes and Greece bought homes and opened shops in southwest Portland, on the fringes of a growing urban center trading in timber and fish.

It was a rambunctious frontier place with the likes of native son John Reed, the soon-to-be legendary socialist journalist, stomping about town. Across the river, Simeon and Amanda Reed, unrelated to John, donated the farmland that would become Reed College, and would draw me to Oregon and its Sephardic community many decades in the future.

The Jewish community burgeoned several avenues west of the south-to-north surging, plump Willamette River, which must have reminded more than a few of the Sephardim of the waterfronts of Izmir, the port of Rhodes and Salonika.

One clan grew so numerous that monikers had to be attached to their first names to distinguish one from the other. Thus, one ebullient pillar of the community was “Sarah the Blond” Menashe, to distinguish her from a darker complected Sarah Menashe.

Descendants of this band of pioneering Jews are celebrating a century of life in Portland with a series of events anchored by an exhibit, “Vida Sefaradi: A Century of Sephardic Life in Portland,” at the Oregon Jewish Museum and Center for Holocaust Education in northwest Portland, an area made famous by Carrie Brownstein and Fred Armisen in “Portlandia.”

The museum has teamed up with Congregation Ahavath Achim, the long-time Sephardic synagogue in the city, to mount the exhibit. Judith Margles, executive director of the museum, said the exhibition celebrates “a small community that is deeply imbued with family history and an awareness of how they came to Portland.”

The first thing that a museum visitor encounters is a large photo mural of an Ahavath Achim 1949 banquet in a crammed synagogue social hall. As one stands before the mural, one can almost smell the fragrant potato bourekas and spanakopita.

As in most chapters of Jewish history, the seemingly idyllic Portland Sephardic existence suffered its setbacks. Robert Moses brought his vision of urban renewal to Portland, and by the early 1960s, urban planners here decided to ring the urban core with freeways. One roadway passed through the Jewish community, decimating it. Four of the city’s five synagogues in the area, including Ahavath Achim, had to relocate along with the greater Jewish community. The Sephardic shul building tragically did not survive an attempted physical transfer to a new locale, leaving startled onlookers weeping. Jewish families moved throughout Portland and into its suburbs.

Rabbi Ron-Ami Meyers, of the Sephardic Congregation Ezra Bessaroth in Seattle, said that both his community and its sister enclave in Portland have demonstrated a remarkable cultural persistence.

“The Sephardim here have scrupulously preserved their distinct ethnic foods that are sold at bazaars and bake sales throughout the year and served at kiddushes,” he said. “There are people who are attracted to the Sephardic style and to the open, nonjudgmental atmosphere that is felt when you walk in and become culturally associated with the Sephardim.”

While the Sepharim have a unique and vibrant culture, from the Pacific Northwest to the banks of Ocean Parkway in Brooklyn, it still constitutes a minority of a minority.

Laura Arnold Leibman, a Reed College professor of English, said, “Because so many Ashkenazi Jews came to the United States during the Great Migration, Ashkenazi religion and culture have often dominated the stories we tell about American Jewish life.” Liebman, who wrote an essay for the catalog linked to the Portland museum exhibit, added, “Because of the size of the early Sephardic community in Portland, Sephardim were major players in the development of Jewish life in the city and continue to be so today.

“Jewish American communities generally take on a certain local flavor, and this exhibit reminds us that the frontier and Pacific Northwest were crucial to the larger history of Sephardic Jews in America.” The story the exhibit tells of how the Sephardim of Portland took on a local coloration is best illustrated by salmon — a royal, coral-colored fish that is as emblematic of the Northwest Sephardim as gray pickled herring is to the Ashkenazim of Eastern Europe stock.

I met my wife-to-be, Matilda, in Portland in the mid-1970s. It was not long before I was honored with a seat at the table of my mother-in-law, Alegre Tevet, and a ticket to an unparalleled lifelong culinary extravaganza. From appetizers through main courses and desserts, her Sephardic food palette provided a never-ending odyssey for the palate. Most memorable were her two signature salmon dishes. One was based on an egg and lemon sauce and the other employed a spicy tomato sauce.

The Jews of Greece and Turkey, where Tevet had her roots, did not know salmon. But the fish has earned a place at the table of Portland Sephardim on the most august of Jewish holidays, and as a Shabbat appetizer. Some Sephardim were among the first fishmongers to open shop in the venerable Pike Place Market; the Policars, a Sephardic family, established a fish emporium in Portland.

The Ahavath Achim synagogue now serves as the center of Sephardic Portland; perched on Barbur Boulevard, the beehive-shaped building is reminiscent in design of the wigwam burners used to eliminate Northwest wood waste.

On display at the museum exhibit are exhibits of Jack Maimon, a Seattle butcher who came to the Portland synagogue to conduct High Holiday services for 50 years, retiring in 1984. Maimon provided my first exposure to the unique chants and songs of the Sephardic liturgy. Having sung in an Ashkenazi synagogue choir in my youth, I first found the Sephardic tunes flat and monotonous compared to the soaring drama and schmaltz of Eastern Europe melodies that I long cherished.

“The melodies of the prayers, the pronunciation of Hebrew, the parts in Ladino, were the same as they had been in the old country,” remembers Sol Varon, a former member of the community now residing in Israel.

I took to heart the warm unity of the Portland congregation chanting in unison, picturing the rhythmic rise and fall of Aegean waves, rolling on and on.

Marty Rosenberg is a writer who lives and works in Kansas City. He lived in Oregon for 17 years. 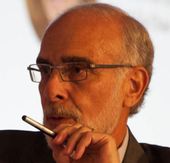