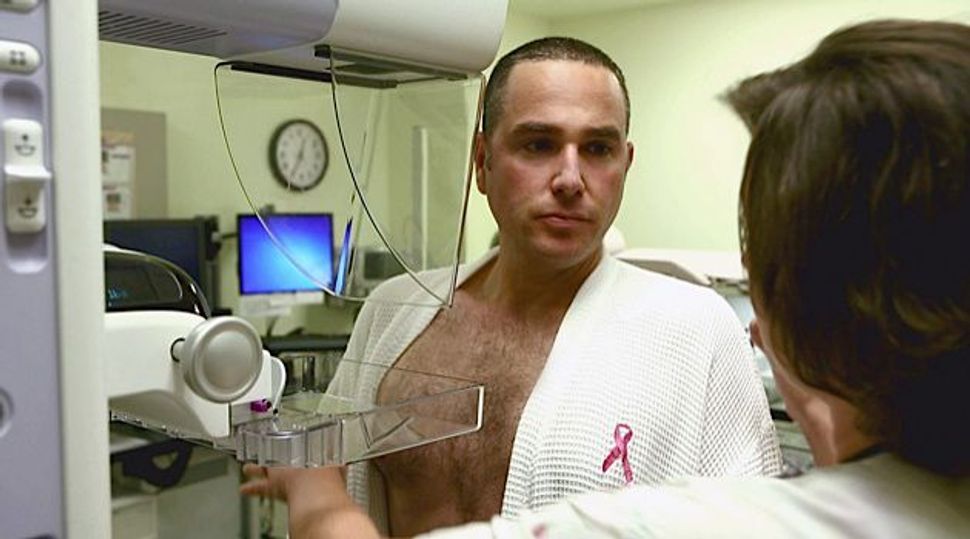 When a friend pulled Harvey Singer in for a bear hug one weekend in Chicago in 2008, a shooting pain went through Singer’s chest.

A couple weeks earlier, Singer had noticed a change on the side of his left nipple but had shrugged it off as the result of being “old and a little out of shape.” His sister Vicki told him to get checked out. She’d recently been diagnosed with her third breast cancer.

“It took 10 seconds before the doctor said ‘Okay, I’m sending you for a mammogram,’” Singer, who is now 60 years old and lives in Rochester, New York, said.

Two days after the procedure, Singer’s doctor called: He had breast cancer. Singer opted for a full mastectomy.

Eighteen months later, he was diagnosed with prostate cancer.

Singer wasn’t just unlucky. Like 1 in 40 Ashkenazi Jews, he and his sister are carriers of a BRCA mutation, which puts them at higher risk for certain hereditary cancers. (His sister Vicki and his mother were diagnosed with breast cancer one month apart in 1995.)

Since May 2013, when actress Angelina Jolie revealed, in an op-ed for the New York Times, that she had tested positive for a BRCA-1 mutation and decided to undergo a prophylactic double-mastectomy, general awareness of the risks of BRCA mutations causing female hereditary cancers has been on the rise. But that is not the case for men: Many people don’t realize that men have the same chance of inheriting the mutation as women, and that male breast cancer, although less common than the female kind, poses a real threat. According to data provided by the Basser Research Center for BRCA at the University of Pennsylvania, men with a BRCA mutation have between 5 and 10% lifetime risk of breast cancer, compared to 0.1% lifetime risk for men in the general population. For women with a BRCA mutation, the risks run up to 80%, as they have more breast tissue. A BRCA mutation also puts men at higher risk for prostate cancer (16%), pancreatic cancer (2-5%) and melanoma (3-5%). Because of the lack of knowledge about male breast cancer as well as the stigma against “a woman’s disease,” men are often diagnosed dangerously late.

When she was diagnosed, Wasil remembers thinking aloud about what this would mean for her daughters. Her doctor immediately stepped in. “You do understand that your son is at much at risk as your daughters?”

Wasil’s doctor was partly right: Female BRCA carriers have a higher risk of developing cancer than male carriers. But the mutation can be passed down equally from a father or mother. If one parent is a carrier, each child — male or female — has a 50% chance of inheriting the mutation. “Just because men don’t have ovaries doesn’t mean they can’t carry BRCA mutations,” said Chani Wiesman, a genetic counselor at the Montefiore Medical Center’s Program for Jewish Genetic Health. “We have to convince them that testing is valuable to them. BRCA mutations are common in Ashkenazi Jews. These are family issues. Not just women issues.” Emphasizing the risk of breast cancer for men can be tricky, she added, because 95% of patients are women. Regardless, an effort must be made.

Wasil is the founder of the Get In Touch Foundation, which partners with schools in all 50 states and 26 countries to teach basic breast health to middle and high school kids. Her doctor’s words lingered in the back of her mind, and last year, the board of Get In Touch decided to extend the outreach to boys. The organization’s Daisy Wheel app, which teaches kids in middle and high school how to perform breast self-examinations, has been downloaded in 80 countries.

“I want to include in the mission statement that we teach girls and guys how to take care of their bodies,” Wasil said. “Men have breast tissue.”

In June, the Food and Drug Administration put out a Consumer Update urging drug companies to include men in clinical trials for breast cancer treatment.

But a lack of research isn’t only hurdle that men must overcome when it comes to breast cancer. In the pink world of sparkly ribbons and girl-power walkathons, men diagnosed with the disease may also feel marginalized during treatment.

Singer recalls he found the “whole process frustrating and embarrassing,” adding that “even the form you fill out before a mammogram has [a diagram of] 36 D-cup breasts and you have to draw in where you think you have a growth.”

The experience, which inspired his book, “Sir, You Have Breast Cancer,” published in August 2013, convinced Singer that something had to be done to inform men — and Jewish men in particular — of the risks associated with BRCA mutations.

In 2009, Singer co-founded HIS with his sister Vicki to provide education about BRCA-related hereditary cancers in men and defeat the gender assumptions around the disease. One of the first outreach campaigns they launched targeted the Jewish community. Last year, over the High Holy Days, they sent out 10,000 brochures to synagogues all around the East Coast. The response was disappointing.

Information can save lives. Alan Blassberg is the perfect example. In 2010, his sister Sammy died of breast cancer at the age of 47. That same year, Blassberg’s sister Lisa was tested for a BRCA mutation. She tested positive and chose to undergo a prophylactic double-mastectomy. When she urged Blassberg to get tested, he laughed it off.

When, “after much Jewish guilt,” Blassberg finally agreed to genetic testing, he turned up positive. He was flabbergasted, but lucky — armed with the information, he’s been able to stay ahead of a cancer diagnosis.

“Testing positive is something that is unshakeable, so I needed to make myself more knowledgeable. Now it was time to be proactive,” he recalled. “Every six months, I do a mammogram and an MRI to stay on top of it.”

With his own family history in mind, Blassberg, a documentary filmmaker, launched a Kickstarter campaign in November 2013. He raised $75,500 for his film, called “Pink and Blue,” in just 34 days.

Since then, Blassberg, 44, has filmed in 10 cities across the United States, and has interviewed more than 50 people, including doctors like Dr. Kristi Funk, who treated Angelina Jolie. The film is set to preview in October, for Breast Cancer Awareness month, and will go into limited release in January.

“At the end of the day, if I can save one family from having to hear a relative moan in pain in the corridor of a hospital, that’s all I could ask for,” he said.

“There’s such social stigma about the word breast. It doesn’t matter. Save your lives.”

Anne Cohen is a staff writer for the Forward’s digital team and editor of the Shmooze blog. Follow her on Twitter: @anneesthercohen