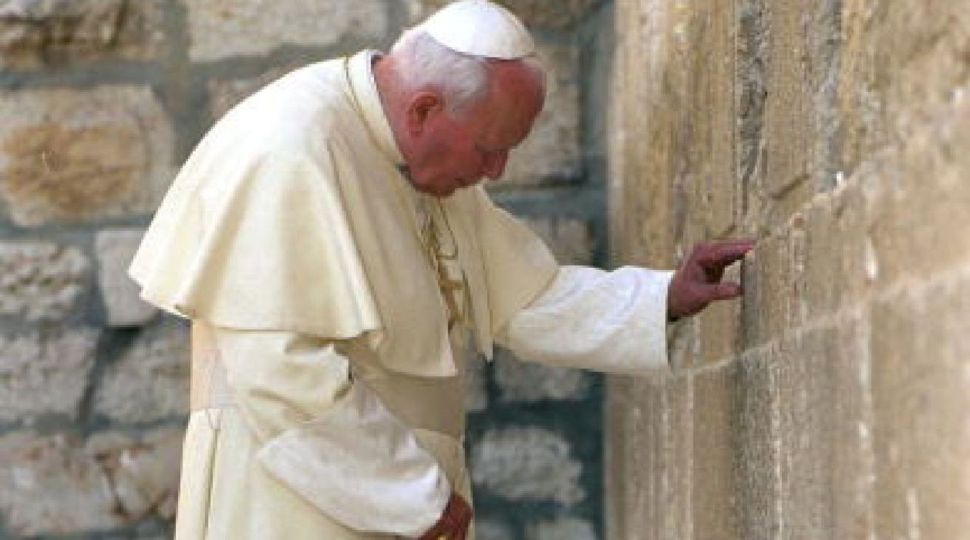 In April, when Pope John Paul II became Saint John Paul the Great, admirers recalled the late pontiff’s affinity for the Jews. “Haaretz” even called his canonization an “historic victory for the Jewish people.” “John Paul II’s Letter to a Jewish Friend” by Svidercoschi, an Italian journalist and Vatican-watcher, documents the friendship between Jerzy Kluger, a Polish Jew raised in Wadowice, and his schoolboy friend Karol Józef Wojtyła, then known as “Lolek,” long before he would become Pope.

Previous books, such as “The Saint for Shalom: How Pope John Paul II Transformed Catholic-Jewish Relations”; Kluger’s own as-told-to memoir, “The Pope and I” and a traveling exhibit, “A Blessing to One Another: Pope John Paul II & the Jewish People,” which visited New York’s Museum of Jewish Heritage in New York, among other sites, recount heart-warming stories. Ten-year-old Lolek told Kluger that “Jews and Catholics are all children of the same God.” Young Lolek was an uninspired soccer player, so he played on the comparatively underachieving local Jewish team (!) where he was goalie, since “Lolek did not like to run.” The friends were separated by World War II, during which most of Kluger’s family was murdered, but decades later they got back in touch and in 1978, after Karol Wojtyła became Pope, his first private audience would be with Kluger and his Irish Catholic wife (Kluger’s two daughters were brought up as Catholics).

In 1981, John Paul II asked Kluger to use his contacts with the Israeli government to help improve relations between the Vatican and Israel. John Paul II frequently spoke out against anti-Semitism and was the first pope to visit Auschwitz. During a visit to Israel, he inserted a prayer note in the Western Wall, asking forgiveness for the Catholic Church’s history of anti-Semitic acts.

His sincerity was undisputed. The American rabbi A. James Rudin recalled: “When [John Paul II] learned that our American Jewish Committee leadership delegation was flying from Rome to Warsaw the next day, John Paul II grew rhapsodic, began to sway and said, ‘Ah, Friday afternoons, Sabbath candles in the windows, psalms being sung, children’s voices….’”

Other observers, such as Forward contributing editor Jerome Chanes have painted a more complex picture of “divided loyalties” and “ambivalence” towards the Jews. In 1986, when the Pope visited the Great Synagogue in Rome, he referred to Jews as “our elder brothers,” a concept which biographers explain he first heard from a Wadowice schoolteacher who was quoting the 19th century Polish poet Adam Mickiewicz, who in turn got the notion from Andrzej Towiański, a Polish Messianist religious leader. Rather than mere fraternal affection, this statement traditionally implies that the elder brother has gone astray, and the Christian Church supersedes or replaces biblical covenants with the Jews (Theologians refer to supersessionism, fulfillment theology, or replacement theology).

This was not just word-splitting. John Paul II repeatedly issued homilies that expressed supersessionism, and a 1991 encyclical appeared to support converting the Jews. The latter subject was raised again in 2000, when John Paul II canonized Pope Pius IX, who forced Roman Jews into a ghetto, approved the church’s seizing of Edgardo Mortara, a Jewish-born boy, and in an 1871 speech referred to anti-clerical Roman Jews as “dogs…howling in the streets.” David Kertzer’s “The Kidnapping of Edgardo Mortara” is currently being adapted as a film by screenwriter Tony Kushner and director Steven Spielberg.

Jewish apostates were also repeatedly honored by John Paul II, as when he named the arch-conservative Jewish-born Jean-Marie Lustiger to the prominent post of cardinal of Paris. In 1998, the Pope beatified Edith Stein (1891-1942), a German-born Jew who was murdered at Auschwitz after becoming a Carmelite nun. Stein stated that she offered herself to God “for the atonement of the unbelief of the Jewish people.”

Such honoring of converts made some Jewish observers feel uneasy. They felt even worse when John Paul II sought to canonize Pope Pius XII, the wartime pontiff whose silence in the face of Nazi atrocities resulted in ongoing reproaches. Nor did John Paul II open Vatican archives on World War II to Holocaust researchers. Instead, he welcomed with state honors such visitors as Yasir Arafat and Austria’s Kurt Waldheim. In 1987, charged with lying about his Nazi past, Waldheim was put on a watch list and banned from entering the United States, but in 1994, Pope John Paul II awarded Waldheim a knighthood in the Order of Pius IX.

More eyebrows were raised in 1998, when Cardinal Aloysius Stepinac of Croatia was beatified by the Pope. Cardinal Stepinac was close to the Nazi invaders of his homeland and welcomed their arrival as occupiers in 1941, only to change his mind a couple of years later. In 2002, Pope John Paul II also canonized Josemaría Escrivá de Balaguer, the Spanish priest who founded Opus Dei. Escrivá was an ally of Spain’s Fascist dictator General Francisco Franco, and Escrivá’s personal assistant claimed that that during a 1960s screening of a World War II film, Escrivá told him: “Hitler couldn’t have been such a bad person. He couldn’t have killed six million. It couldn’t have been more than four million.”
In 2001, John Paul II visited Syria, where in a speech, President Bashar Al-Assad declared that holy war should be fought together by Muslims and Christians against Jews for trying “to kill the principles of all religions with the same mentality of betraying Jesus Christ and torturing Him, and in the same way that [Jews] tried to commit treachery against Prophet Mohammad.” The Pope had no rejoinder.

He did reportedly respond in 2004 to Mel Gibson’s “The Passion of the Christ,” supposedly endorsing the film after a screening by saying, “It is as it was.” The following year, the Pope’s book “Memory and Identity: Conversations at the Dawn of a Millennium” conflated the Holocaust and abortion, claiming that both occur when people usurp the “law of God.”

Beyond such unfortunate episodes with Jews, John Paul II’s papacy was controversial among Catholics, clergy and laymen alike, for enforcing backward-looking doctrines about contraception (despite the AIDS pandemic), abortion, gay rights, ordination of female clergy, and other issues. Dissenters were censured, including respected theologians such as Switzerland’s Hans Küng, Brazil’s Leonardo Boff, and America’s Charles E. Curran. Draconian demands for orthodoxy included the requirement that in the U. S. A., all theologians in Catholic higher-education institutions obtain a mandatum, or certificate from local bishops stating that their teachings were church-approved.

At the same time, John Paul II did not decisively reverse the Church’s longstanding protection of pedophiles among the clergy. These criticisms were always leavened with appreciation for John Paul II’s disarmingly unprecedented – from a pope – expressions of alliance with Jews and Judaism. Even when his friends disagreed with him, as Jerzy Kluger did about the Arafat official visits, objections were leavened with affection and admiration. Yet with such a mixed legacy, despite the appealing quotes and anecdotes in “John Paul II’s Letter to a Jewish Friend” and elsewhere, can it be said that his papacy was entirely good for the Jews?