The Details Are in the Devil 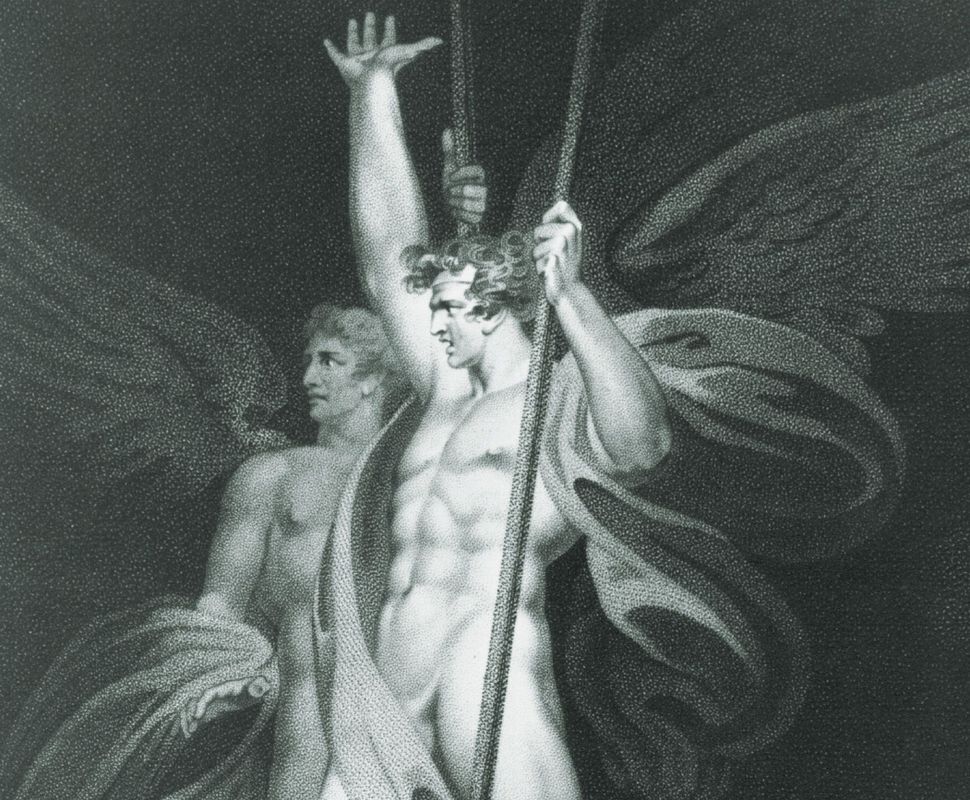 Satanic Duo: Satan and Beelzebub as illustrated in an 18th-century version of John Milton’s ‘Paradise Lost.’ Image by Getty Images

Christophe Barbier, editor of the influential left-leaning French weekly L’Express, published a column in his paper earlier in August about the upsurge of anti-Semitism in France in the wake of the fighting in Gaza. After condemning the phenomenon, Barbier turned to French Jews and in turn condemned those of them who, despairing of life in France, are considering joining the growing French Jewish immigration to Israel. “Qu’ils prennent garde ceux qui consultent les nouveaux Baal-Zebub pour apaiser leur crainte!” he wrote: “Let those who cater to their fear by consulting the new Beelzebubs beware!”

French Baal-Zebub, like English Beelzebub, is a Hebrew-derived Christian term for the devil, and there is some irony, to put it mildly, in a criticism of anti-Semitism turning into a diatribe against French Jews for consorting with the devil of Zionism. Even when European intellectuals like Barbier defend the Jews, it would seem, the only way they know how to do it is by attacking them.

Beelzebub comes, via the Latin Bible, from Hebrew ba’al z’vuv, literally “Lord [or Ba’al] of the Fly.” (Most people know this phrase better as “Lord of the Flies” from the title of William Golding’s best-selling 1954 novel, but in the Bible, z’vuv, “fly,” is in the singular.) Ba’al was the ancient Canaanite sky god and the senior figure in the Canaanite pantheon, and Ba’al Z’vuv is mentioned in the first chapter of Kings II as the name of a Philistine deity who was worshipped by some Israelites, too. Kings disapprovingly narrates (in the King James translation) what happened when the Israelite king Ahaziah fell ill: “He sent messengers and said unto them, ‘Go, inquire of Baal-Zebub, the god of [the Philistine city of] Ekron, whether I shall recover of this disease.”

Although some scholars have argued that flies were indeed associated with this god, the name ba’al z’vuv is far more likely to be a jeering pun on the Canaanite ba’al z’vul, “Lord of the Heavens.” This seems clear from the Greek New Testament, where the name occurs several times as Beelzeboul. (This is also an interesting indication of the lateness of the final editing of some parts of the Hebrew Bible, since ba’al z’vul rather than ba’al z’vuv was obviously still common usage in late Second Temple times.) As a chief rival of the God of the Israelites, Ba’al is the object of similar thrusts elsewhere in the Bible as well. Whereas, for example, Saul’s son Jonathan, so we read in the book of Chronicles, named his own son Meriv-Ba’al, “Warrior of Ba’al,” the book of Samuel refers to him as Mephiboshet, probably from pid, “misfortune,” plus boshet, “shame.”

In normative rabbinic tradition, Ba’al Z’vuv or Ba’al Z’vul does not occupy any sort of position. Yet the name’s New Testament occurrences clearly indicate that it had become identified in the Second Temple period with the chief, or one of the chiefs, of the devils, for Jesus is accused by his opponents in several places in the Gospels of being possessed by this figure or ministering to him. Thus, the King James translation of the Gospel according to Mark tells us that there were “scribes,” or learned Jews, who, after coming to the Galilee from Jerusalem to witness Jesus’ performance of exorcisms, said of him, “He hath Beelzebub [in him], and by the prince of devils casteth he out devils.”

Another source from the first centuries of the Common Era that throws light on the figure of Beelzebub is “The Testament of Solomon,” an apocryphal work that, composed in Greek by either Jews or early Christians, purports to be an autobiographical account of King Solomon’s magical dealings with demons. At one point in the story, after Solomon has had several encounters with “Beelzeboul,” he relates: “Then I summoned Beelzeboul to appear before me again. When he was seated, I thought it fitting to ask him: ‘Why are you alone Prince of the Demons?’ He replied, ‘Because I am the only one left of the heavenly angels who rebelled against God before the creation of mankind and were expelled from heaven. I was the highest-ranking angel in heaven…. I bring destruction by means of tyrants. I cause the demons to be worshiped alongside men. I arouse [sexual] desire in holy men and chosen priests. I bring about jealousies and murders in a country, and I instigate wars.’”

In later Christian tradition, Beelzebub, while not Satan himself, is considered one of his chief aides. Milton’s “Paradise Lost,” for instance, declares that, “Satan except,” there was “none higher” in heaven than Beelzebub before the rebellious angels’ fall. And this is whom, according to the editor of L’Express, French Jews thinking of moving to Israel are in the service of? As the old saying goes, “God protect us from our friends, because our enemies we can deal with by ourselves.”

The Details Are in the Devil