Investing in Colorado’s Youth and Beyond 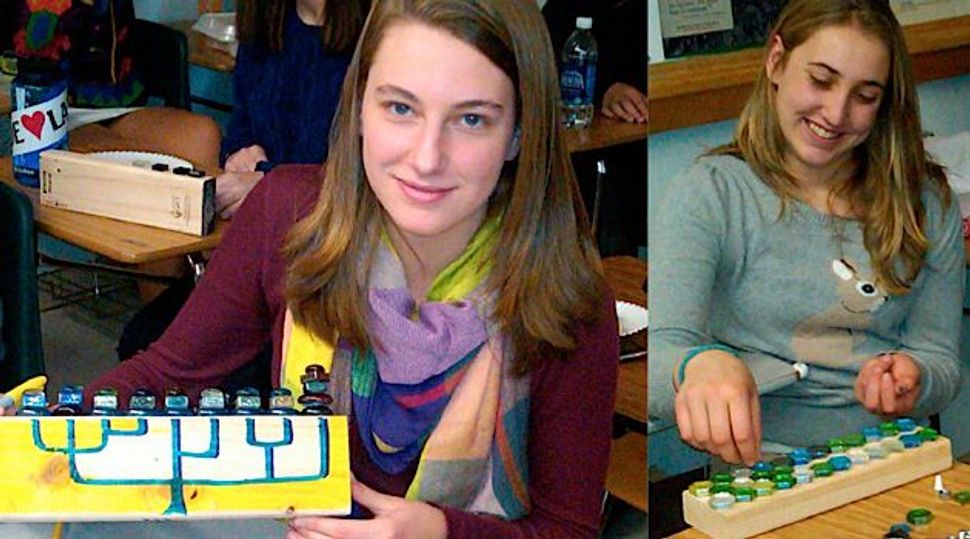 Light Unto the Nation: Will these Denver teens making hanukkiahs stay committed to their Jewish heritage? Image by courtesy of michael sunshine

Five years ago, Kendall Weistroffer had almost no connection to Judaism. The Colorado native rarely stepped foot in a synagogue, hadn’t celebrated a bat mitzvah and seemed as likely to study Finnish as Hebrew.

She eventually met Rabbi Michael Sunshine, director of Jewish Student Connection, a network of Jewish high school discussion groups in Denver, and ended up founding a chapter at her high school. Now a college student, Weistroffer is deeply involved in her campus Hillel and is minoring in Hebrew, thanks in part to her experience in JSC.

Yet for every story like Weistroffer’s, there are numerous more of teens who have abandoned Jewish life. These young people are increasingly catching the attention of community organizations that are responding with summer camps, youth groups and after-school programs to address the lingering dilemma of how best to keep Jewish youths connected to Judaism.

The Jim Joseph Foundation, a San Francisco-based philanthropy dedicated to improving Jewish education, has joined the fight with a new, multimillion dollar teen engagement initiative that will target 10 cities, among them Boston, Denver and New York.

The foundation has funded a range of programs for Jewish teens since its establishment in 2006, but Josh Miller, the foundation’s senior program officer, said it had grown concerned over the high attrition rate among those teens.

Miller estimates that 80% of teens leave active Jewish life after their bar or bat mitzvahs. “That was the alarm bell,” he said, which spurred the foundation to further action.

After extensively studying several approaches, the foundation made a variety of recommendations about how to improve Jewish teen programs. These included bringing clubs to meet teens in their schools, fostering mentoring relationships with adults and giving teens more control over the programs.

Jim Joseph’s funding effort may represent the first wave of increased interest in Jewish teens, according to David Bryfman, chief innovation officer at the Jewish Education Project, a New York City-based think tank. “In the last decade, everyone was talking about young adults in their post-Birthright years,” he said, referring to the popular Israel trips for Jewish young adults. “For the next few years, teens are going to be really hot on the communal agenda.”

The foundation is pooling its resources with local foundations willing to put up matching funds for teen engagement. One of its first stops was the Rose Community Foundation in Denver, which, among other goals, seeks to keep Jews connected to their faith and community

In Denver, that’s an uphill battle.

About 70% of Denver Jews under 40 marry out of the faith, according to the 2007 Denver/Boulder Jewish Community Study. And 6 in 10 families are not involved in organized Jewish life at all.

Lisa Farber Miller, senior program officer at Rose, said the apathy of Denver’s Jewish community may foreshadow “the future of other Jewish communities around the country” unless bold action is taken. She pointed to the much-heralded Pew Research Center study that showed declining affiliation with Jewish life and high rates of intermarriage nationally.

“As an experimenting ground, Denver is a really interesting case study for this kind of work,” she said.

Though the news is bleak for all age groups, it’s the teens who really worry Farber Miller. During adolescence, “teens are really thinking, ‘Who do I want to be when I grow up, and what does it mean to be Jewish?’” she said. “We decided we really needed to focus more resources on that period of identity formation.”

Leaders of struggling Jewish groups had long assumed that if Jewish teens simply knew more about their programs, they would show up, according to Farber Miller. “All our [Rose] grantees kept saying the real problem here is marketing: If we just had more money for marketing, we would get more kids into our programs,” she said.

Rose undertook its own study of teen engagement in Denver in 2010, and discovered that marketing was the least of its challenges: Teens weren’t interested in the programs themselves, nor did they have time to participate.

Another problem was location. The Denver Hebrew High School, a Jewish Sunday school for teens, held its sessions in a Jewish community building. But Denver is a sprawling city, and for some, the commute to the building took half an hour or more by car.

The school was once a major hub for formal Jewish teen education, with classes on a wide range of topics, from Jewish storytelling to Judaism and nature. It sent generations of Denverites on trips to Israel and Poland, and just 15 years ago boasted an enrollment of 350 students. But the school slowly saw its numbers dwindle, and two years ago, it shut its doors for good.

In its new partnership with Jim Joseph, Rose is moving away from the Hebrew High model, focusing instead on delivering teen programs that are held in convenient locations, have flexible hours and offer meaningful relationships with adult mentors.

On all these counts, the Jewish Student Connection, the group that attracted Kendall Weistroffer, is a good match. The organization’s Colorado branch is overseen by a popular young rabbi aptly named Sunshine, who presides over lunch meetings held in seven area high schools.

“It’s bringing Hebrew High to them as opposed to sending them to Hebrew High,” Sunshine said.

Under the new funding initiative, Sunshine plans to more than double the number of teens served by JSC, which he describes as a way to provide unaffiliated Jewish teens with an “on-ramp” into Judaism.

Before her association with JSC, Weistroffer didn’t have much of a connection to Jewish life. Weistroffer said her grandmother “wasn’t very proud of her Jewish heritage” and didn’t pass along a Jewish identity to Weistroffer’s mother. Her father isn’t Jewish.

“I didn’t think that there was anything wrong with Judaism, I just didn’t see how it connected to my life,” she said.

She later met Sunshine, whom she described as a mentor, and worked with him to establish a JSC club at her high school.

Starting a Jewish club at a school with a predominantly Protestant student body wasn’t a cakewalk. But the battle to get enough members and make the case for the club to school administrators strengthened Weistroffer’s commitment to Judaism.

“Setting up the JSC taught me about how people are viewed in our world and the sort of stigmas that can come from being a minority,” she said.

Weistroffer’s experience illustrates another important lesson funders have learned: If you want teens to participate, give them more control over their programs.

A new Jewish Teens Make It Happen fellowship funded by the Jim Joseph and Rose Community foundations will allow teens to apply for microgrants of up to $1,000 to create meaningful Jewish experiences.

As an example of a possible awardee, Farber Miller pointed to a teen tuba player who wants to bring together Jewish teens and a Jewish professional tuba player for a “Tuba Shvat” Seder on Tu B’Shvat, a Jewish arbor holiday.

Rose is no stranger to giving Jewish teens access to the purse strings: Its Rose Youth Foundation gives 23 teens the opportunity to choose how to disperse $60,000 to charitable causes each year. Under the new microgrant program, recent foundation alumni will choose which applications make the cut.

“Students in high school don’t typically get the same amount of responsibility or respect for their opinions as do adults,” said Avital Rotbart, a youth foundation participant and senior at the Modern Orthodox Denver Academy of Torah.

As Rotbart sees it, allowing teens to award and receive grant money is nothing to be ashamed of, especially if the process is conducted thoughtfully. “The kids who are involved in this aren’t kids who want to have pizza once a week,” she said. “They’re kids who are driven, who have a vision and want to see it become a reality.”

Jim Joseph is certainly not the first foundation to invest in Jewish teen programming. But its wide-ranging local investments stem from a belief, in the words of the Jewish Education Project’s Bryfman, “that no one organization is going to be able to stem the tide by itself.”

The Schusterman Family Foundation, in contrast, has largely directed its teen funding to a single organization: BBYO, a non-denominational high school youth group with chapters around the world. Sandy Cardin, the foundation’s president, acknowledged in an interview that his foundation had to choose between funding at the national level or the local level, because each approach “requires tremendous focus as well as a significant investment of time and resources.”

But he said he “loves” Jim Joseph’s new initiative, and welcomes other local funding efforts like it.

Investments in large national programs can reap rewards, too. When Schusterman began funding BBYO in the early 2000s, the organization was small and facing financial trouble. Today, it has more than tripled in size, boasting over 40,000 participants worldwide.

Despite the large investments flowing into Denver from Jim Joseph, there are still major obstacles to engaging Jews in the mile-high city. “Denver is a great Jewish community, but it’s not like walking down the street in New York: [Judaism] is not just infused in the culture,” said Phyllis Adler, director of the Colorado Agency for Jewish Education. “It’s not on every street corner here. I think we have to be a little more conscious of our Jewish identity and our culture.”

Hody Nemes is a summer fellow at the Forward. Contact him at [email protected] or on Twitter, @hodifly

Investing in Colorado’s Youth and Beyond