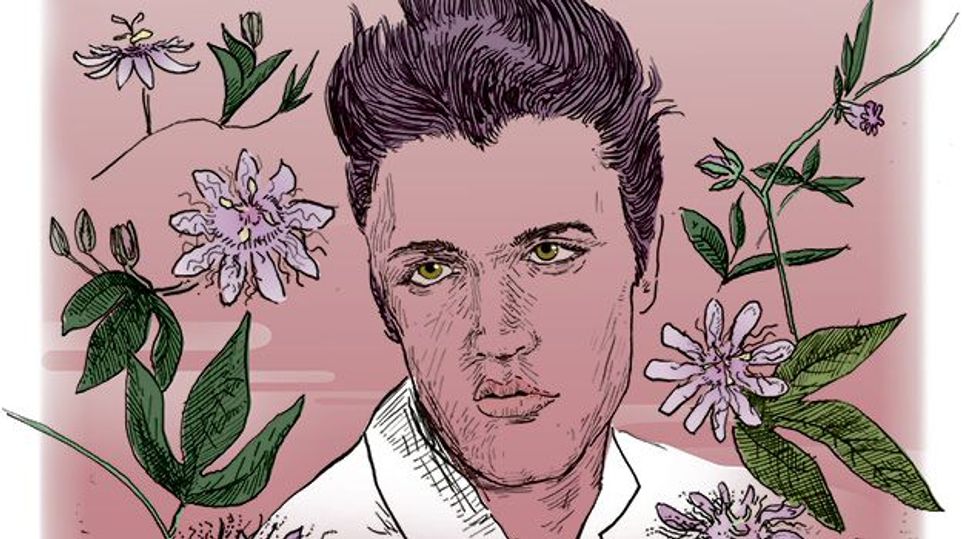 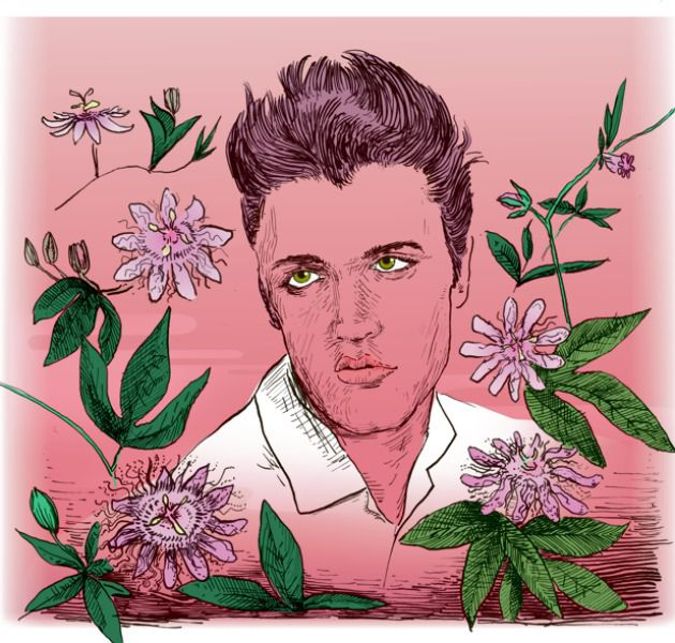 In the summer of 1954, Elvis Presley released his first single. He had one problem: He couldn’t play it.

The aspiring 19-year-old singer was living with his parents at 462 Alabama Avenue in Memphis, Tennessee. With rent at $50 a month, his family was too poor to afford a record player. So, as he often did, Elvis turned to his upstairs neighbors for help — Rabbi Alfred Fruchter and Jeannette Fruchter, his wife.

“He asked to borrow our record player. Mom said: ‘Elvis, you’re in luck. We’re going away for the whole summer, so you can have it,’” their son, Harold Fruchter, recounted.

Harold Fruchter has only dim memories of having Elvis Presley as a downstairs neighbor. But he does know that Elvis was the first person to carry him up the steps, just days after he was born, in July 1952. According to family lore, when Jeanette Fruchter came home from the hospital, Elvis ran down and said, “Mrs. Fruchter, may I have the honor of carrying your newborn upstairs?”

“Our addresses were the same, which means my birth certificate has Elvis’s address on it, which is pretty cool,” Harold Fruchter said.

Though the Fruchters left Memphis in 1955, their brief brush with the King left an indelible mark. Until her death, Jeannette Fruchter spoke of “the nicest boy you could ever hope to meet” with tears in her eyes. When he graduated from L.C. Humes High School in 1953, she was there with a gift: Elvis’s first pair of cufflinks. Black onyx, to be exact.

The two families were close. Gladys Presley, Elvis’s mother, sat down most afternoons after work to chat with Jeannette Fruchter. When the Presleys were short on money, the Fruchters helped pay their electric and water bills. And Elvis Presley even acted as a Shabbos goy for the family, turning on the lights and gas stove for “Sir Rabbi,” as he called Alfred Fruchter. Years later, the musician would explain his relationship with the Fruchters to his security guards at a concert that Alfred Fruchter attended. Albert Goldman’s 1981 biography, “Elvis,” quotes him as saying: “Oh, we used to live underneath him on Alabama Street. He was really nice to me, he’d loan me money, and sometimes he’d ask me to turn on the lights for him on Saturday.”

It’s no accident that these two families ended up neighbors. Mirroring a trend seen across the South, the Fruchters, like many Jewish families, initially settled in poorer downtown areas before eventually acquiring the means to move out to the suburbs. (Both the Fruchters and the Presleys paid rent to a Mrs. Dubrovner, the wife of a kosher butcher.) It’s a trajectory encapsulated by Memphis’s largest congregation, Baron Hirsch. Originally located in “the Pinch,” the downtown core of immigrant communities, the community moved first to Midtown in the late 1950s and then to lush East Memphis, where it now draws up to 1,000 worshippers on the High Holy Days. 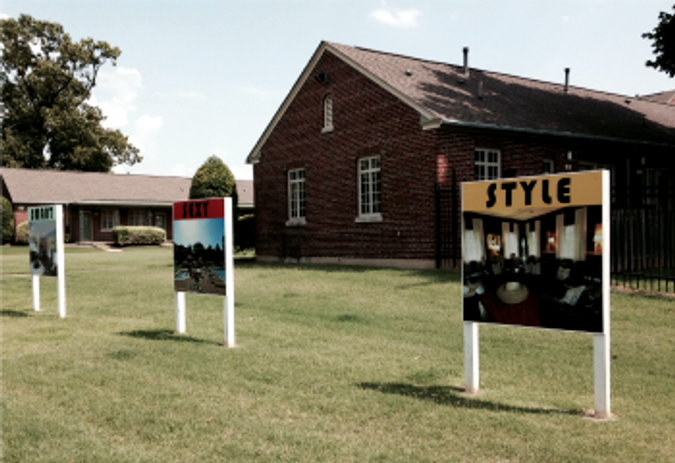 In fact, 462 Alabama Avenue no longer exists. In its place stands a new apartment complex boasting “smart — sexy — style.” Run-down single-story homes still stand nearby, and across the street trucks rumble along the highway.

The Fruchters moved to Memphis in the late 1940s when Alfred Fruchter became the first principal at the Memphis (now Margolin) Hebrew Academy, which he helped found partly in response to communal anxiety about intermarriage and lack of Jewish education. His children say he served as principal for three years without pay.

The Presleys moved to Memphis from Tupelo, Mississippi, in 1948, when Elvis was 13. Having made only $1,915 the year before, according to Vernon and Gladys Presley’s combined income tax return, the family lived in rooming houses for nearly a year before settling on Alabama Street. At school, Elvis struggled in several classes — notably music, for which he earned a C, as his eighth-grade report card shows. When his parents bought him a guitar for his 11th birthday, he was upset; he had wanted a bicycle. Famously, he never learned to read music. But according to Goldman’s biography, he did benefit from early exposure to the masters — of Jewish cantorial music. While many, including The New York Times, have scoffed at the idea that Elvis’s music may have been influenced by cantorial greats like Yossele Rosenblatt and Moishe Oysher, Jeannette Fruchter made the case for it in a 1997 interview with The Baltimore Sun. “My husband listened to his records every Sunday, with the windows open, because it was so hot in Memphis, and you could hear them all over,” she said. 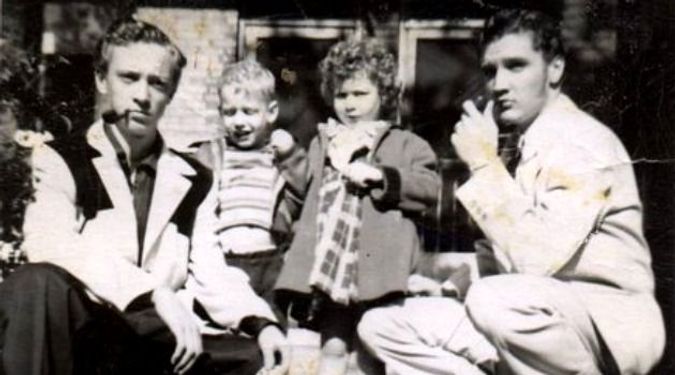 Neighbors: Elvis sits beside the young David and Debbie Fruchter. Image by Courtesy of Harold Fruchter

But her husband was far from convinced. “Dad was so upset by that,” Harold Fruchter remembered. “He said, ‘How could you think that Elvis’s music was anything like great cantorial music?’”

In fact, the Fruchters were stunned at how successful their young neighbor became.

“My parents didn’t expect him to become famous,” Judy, Harold’s sister, said. “They thought he had a nice voice, but they didn’t think it was exceptional.”

That “nice” voice sure bought Presley a “nice” house.

The singer bought Graceland at age 22. Today, the mansion receives more than 600,000 visitors a year and stands as the enduring symbol of the most famous entertainer of the 20th century. The 13.8-acre property contains 23 rooms, including eight bedrooms and eight bathrooms. It also features a 15-foot white sofa and floor-to-ceiling stained-glass peacocks in the front living room, a custom-designed indoor waterfall in the “Jungle Room,” a 360-degree mirror-paneled rec room containing three televisions (so that he could watch all three networks at once) and a billiards room where 350 yards of ruche-patterned fabric line the walls and ceiling. 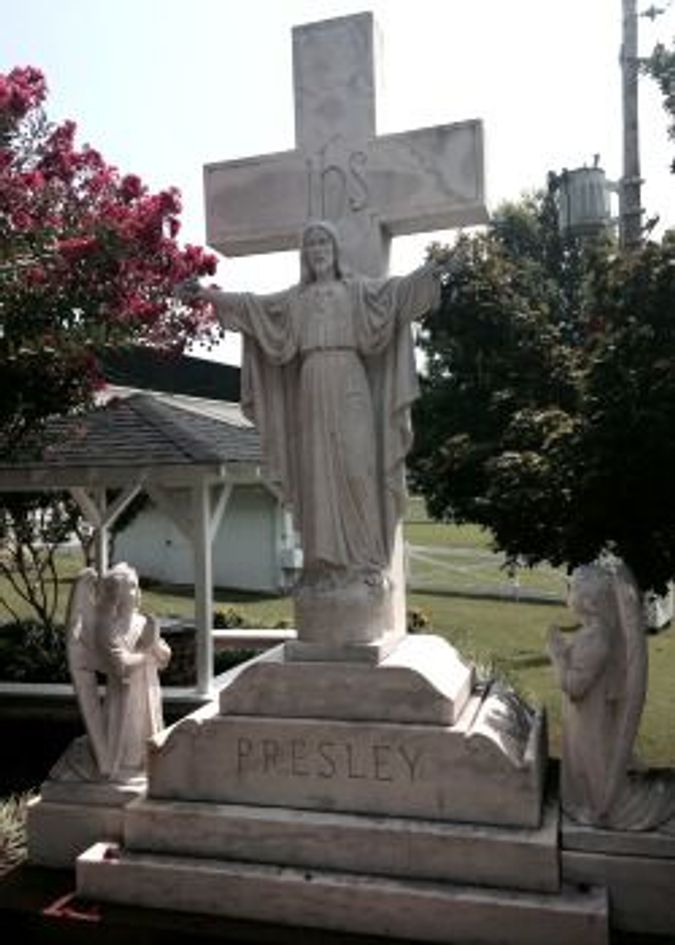 Out back is the “Lisa Marie.” Named after Elvis’s daughter, the private plane has a fully stocked bar of soft drinks (the King didn’t like alcohol — he preferred Diet Dr Pepper and lime Gatorade), a conference room, a full pullout bed and a bathroom sink covered with flakes of 24-carat gold. The plane was used for spontaneous family outings — like the time Elvis realized his daughter had never seen snow, so he flew to Colorado with her so that she could toss around a snowball or two before heading right back home.

One of Elvis’s more famous contributions to the estate was a meditation garden, where he, his parents and his grandmother Minnie Mae Presley are buried. Watching over them is a looming marble statue of Jesus Christ on the cross, engraved with the name “Presley.”

This impressive monument belies rumors, circulating over the past few years, that Elvis may actually have been halachically Jewish through his maternal great-great grandmother. That thought troubles the current generation of Fruchters.

“All this talk now about Elvis being Jewish — that’s really disturbing,” Judy Fruchter said. “Because if he was Jewish, my father was making him desecrate Shabbat. He’s probably turning in his grave.”