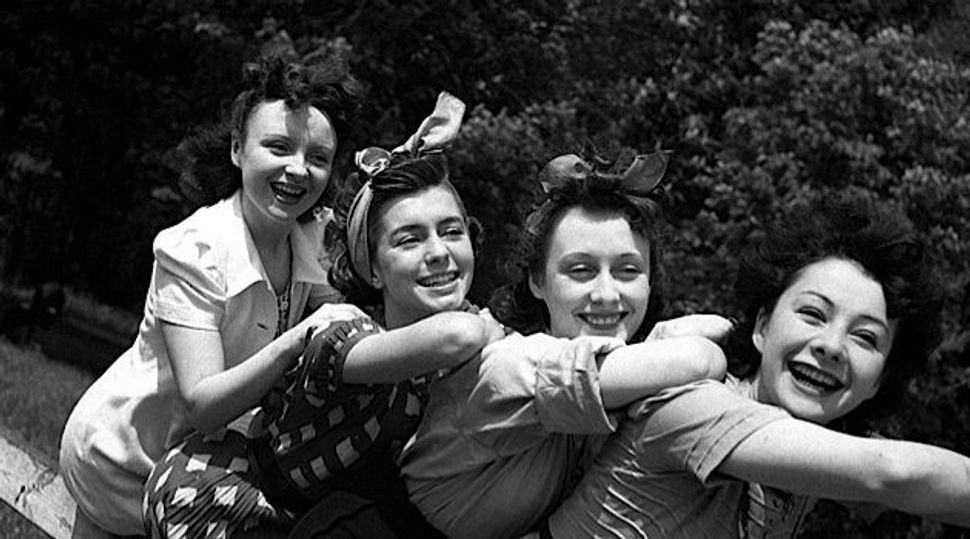 Pique-Nique for Four: From left, Odette Joyeux, Elina Labourdette and Michelie Francey with Sylvia Bataille who appeared in the 1936 Jean Renoir film ‘A Day in the Country.’ Image by Ap images

Although overachieving Jews can transform their native lands triumphantly, the way their countries change them can often be tragic. This is one conclusion to be drawn from “110 French Jewish Women Who Changed France” by sociologist Michèle Bitton. Alongside dozens of Holocaust martyrs, this biographical dictionary also describes Jewish women of note who were hindered by obstacles ranging from marriage to other family tsuris.

The actress Sylvia Bataille (born Sylvia Maklès) is still remembered for her role as Henriette in [Jean Renoir’s 1936 film “Partie de campagne” (“A Day in the Country.”)][2] By 1938, she was living with an up-and-coming young psychoanalyst named Jacques Lacan. As Lacan’s career and fame grew, Bataille’s acting work became overshadowed, and by 1950 she had retired entirely from public life to serve as his helpmeet.

Other Jewish performing careers were subject to the torments of history. Marianne Oswald (born Sarah Alice Bloch) was born to a Polish Jewish family. In 1931, she sang tragic ballads by the German Jewish composer Kurt Weill at the cabaret Le Boeuf sur le Toit. In 1939, she fled to America where she published a memoir, later published in France. Returning to France in 1946, Oswald found that the grim subjects of her songs were no longer fashionable in Parisian cabarets. Struggling economically, for over 30 years Oswald occupied a modest room in the Hôtel Lutetia in Paris’s 6th arrondissement, which had housed the Gestapo during the Nazi Occupation, and also sheltered liberated concentration camp prisoners upon their return to Paris after the war.

Another performing survivor who fell victim to a fickle public was soprano Agnès Capri (born Sophie Rose Fridmann). Capri also starred at Le Boeuf sur le Toit, and opened her own nightspot, Le Petit Théâtre de nuit, where she performed the music of the Hungarian Jewish songwriter Joseph Kosma, among others. Capri spent the war years in Algeria, and when she returned, the taste for her style of prewar satire had faded. Later she unsuccessfully strove to promote the careers of talented younger performers, including the French Jewish songwriter Georges Moustaki.

Other woes were faced by the French Jewish singer-songwriter known as Barbara. Born Monique Andrée Serf in 1930 in Paris, Barbara took her stage name from Varvara, her Moldavian grandmother. As a French Jew, she became a moving target during the wartime years of German Occupation. To compound the trauma of being a refugee, her father sexually molested her: “One evening at Tarbes, my universe plunged into horror, and I was ten and a half,” she wrote.

Barbara’s song “The Black Eagle” recounts a dream in which a bird swoops down on the singer, in what has been interpreted by critics as Freudian symbolism for a predatory, possibly incestuous attack. In his book “Ugly Ducklings,” the neuropsychiatrist Boris Cyrulnik, himself a Holocaust survivor, cites Barbara as an example of how traumatized children may nevertheless survive ordeals and accomplish things in later life.

Another creative talent who survived more than war was Germaine Aziz, who wrote “Locked Rooms: the Story of an Algerian Jewish Prostitute.” Aziz, who died in 2003 at age 77, was born in Paris to a poor Algerian Jewish family. Her grandfather was a rabbi in Oran, Algeria, and after her mother’s early death, Aziz was sent to live with relatives in that city’s Jewish ghetto. To escape poverty, at 17 Aziz accepted a job as a bar hostess in Bône, a city in northeastern Algeria now called Annaba. Her employer enslaved her as a prostitute. Aziz vividly describes the odors, diseases and filth she endured in a series of brothels, where she was bought and sold with no chance of escape, due to police and governmental corruption. She finally returned to Paris in the 1950s, at first as a streetwalker and later as an office employee. Coming to terms with her Jewish identity and serving as a witness for those who did not survive similar experiences became her raison d’être.

Bitton also includes the classicist Jacqueline de Romilly whom I interviewed shortly after she was elected to Académie française in 1988. Despite inhabiting an apartment in Paris’s ritzy 16th arrondissement, de Romilly seemed gloomy about her failed marriage to a banker of Jewish origin, and about the abandonment of classical education in France.

Bitton’s research sheds light on talents unjustly overlooked in France, including Madeleine Milhaud, the actress, librettist and wife of the French Jewish composer Darius Milhaud. Madeleine Milhaud was a zesty nonagenarian when I visited her at the Boulevard de Clichy apartment that she had occupied since the 1920s, except during the war years that the Milhauds spent in Oakland, California. Unlike de Romilly, Milhaud was ardently energetic, forward-looking, and not wistful. When she died at age 106, her passing received short shrift in the French media, perhaps in part due to the current rejection of Darius Milhaud’s compositions by France’s critical tastemakers.

Similarly neglected, if for different reasons, is the writer Elsa Triolet (born Ella Kagan.) The house in which Triolet lived with her husband, poet and novelist Louis Aragon, was turned into a museum, now in danger of closure due to underfunding by the French government, according to media reports. For French politicians, the Maison Triolet-Aragon in Saint-Arnoult-en-Yvelines in north-central France may be an unwelcome reminder of times when some admired anti-Fascist Resistants were also ardent Communists, as indeed Mr. and Mrs. Aragon were.

Another such activist unmentioned by Bitton is Hélène Rytmann, also a noted heroine of the French Resistance. In 1946, Rytmann met and eventually married Louis Althusser, an emotionally disturbed political philosopher who would win worldwide fame for his writings before strangling Rytmann in their university apartment in 1980. Never tried for his crime, Althusser was hospitalized and wrote “The Future Lasts a Long Time,” a self-justifying memoir about which the French Jewish journalist Claude Sarraute noted: “It stars the culprit.” Nor does Rytmann get any say in Althusser’s subsequently published “Letters to Hélène: 1947-1980,” which at least provide evidence of loving feelings in the marriage. As Althusser’s biographer Yann Moulier-Boutang explained, Althusser’s mistresses and acolytes have badmouthed Rytmann in published accounts for decades. It is high time that Hélène Rytmann be remembered with dignity as an individual, as 110 other Jewish heroines are, thanks in part to Bitton’s diligent labors.