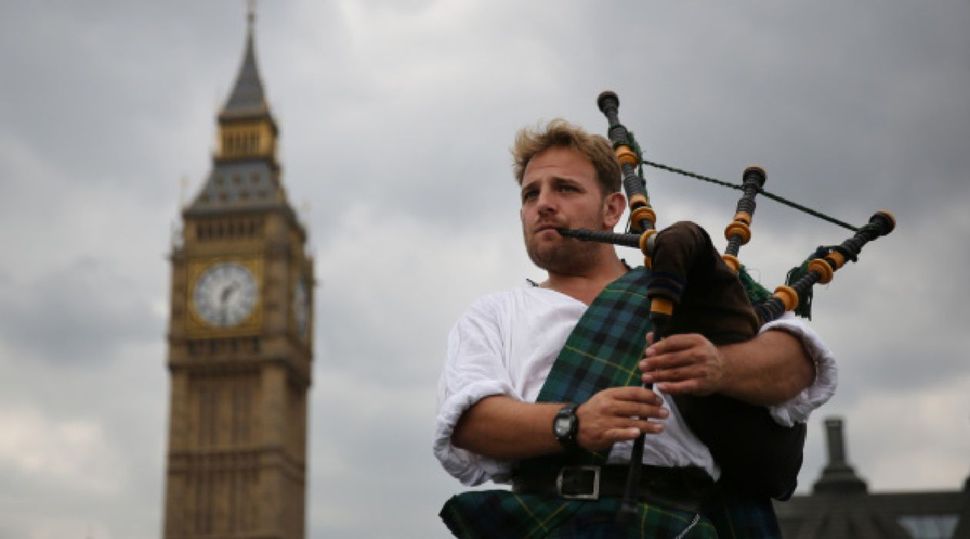 Should an Old Acquaintance With Yiddish Be Forgot Some theorists have posited that the Scots language shares some of Yiddish’s Germanic vocabulary. Image by Getty Images

Recently, as Scotland’s independence vote began to loom large in the media, someone asked me if I had ever heard of Scots Yiddish. “I canna say that I have,” I answered, only to be told that there was an entire chapter on the subject in David Daiches’s autobiographical “Two Worlds: An Edinburgh Jewish Childhood.” Scots Yiddish? I decided to have a look.

Daiches, a well-known English literary critic and historian who grew up in Edinburgh and later taught for years in the United States, was the son of a prominent rabbi, the de facto head of Edinburgh’s small Jewish community; his book is a fond memoir of a 1920s childhood and adolescence in both a strictly Orthodox home and a friendly, tolerant city in which Jewishness was casually accepted. Edinburgh, Daiches writes, had some 400 Jewish families in those days, many composed of Yiddish-speaking immigrants from Eastern Europe. Yet although he indeed refers to their speech as “Scots Yiddish” and even calls it “one of the most remarkable dialects ever spoken by man,” one comes away from his discussion of it with a sense of something linguistically less momentous. What he describes, far from being a distinctive language or dialect, is little more than what he terms “the debased Scots of the Edinburgh streets,” spoken with a Yiddish accent and a smattering of Yiddish words. It is merely a Scottish version, one might say, of the English that Eastern European Jewish immigrants were speaking on the streets of New York in the same period.

Still, such “Scots Yiddish” has a charm that the English of Orchard or Delancey Street never had. “Vot time’s yer barmitzvie, laddie?” Daiches recalls being asked by a fellow synagogue-goer shortly before his 13th birthday. “Ye’ll hae a drap o’bramfen. Ye ken: Nem a schmeck fun Dzon Beck.” Bronfn is Yiddish for liquor (in Eastern Europe it generally meant vodka, but Edinburgh is whisky land), while “Nem a shmek,” Yiddish for “Have a taste,” is, as Daiches points out, a clever translation that preserves the rhyme of the first half of the advertising slogan “Take a peg of John Begg.” And when Daiches once asked someone in the same synagogue why he scolded a visitor for talking during services when he was wont to talk during them himself, the reply was:

“Two men vent into a poob and ordered a glass beer. Dey hadna been in dat poob more dan vonce or twice before. Vell, day sip deir beer un’ dey sit talking un’ schmoosing. Dey sit un’ talk un’ talk. At last de barman leans over de counter and he says to dem: ‘Oot!’ Nu, dat’s how it is mit a shul. I come here every veek and Hakodosh Borukh Hu [the Holy One Blessed Be He — that is God] kens me vell, un’ he don’t mind if I take it easy. But dese bleggages dat come vonce or twice a year — no! Dey daven or dey shot op!”

“’Bleggage,’ meaning scoundrel — one of two such words that Daiches mentions as exclusive to Scots Yiddish — is taken by him.to be a corruption of “blackguard,” which seems a reasonable guess. The second word, for which he gives no origin, is “trebblers,” defined by him as “those Edinburgh Jews who made a precarious living as itinerant salesmen, peddling anything from sewing needles to ready-made dresses.” The derivation is almost certainly from Yiddish traybn, a cognate of English “drive” that occurs in the expression traybn a gesheft, “to run a business.” (The word may have assumed this meaning because many peddlers drove carts or wagons with their goods from village to village.) Daiches writes affectionately about the trebblers who filled the trains every morning on their way to their various destinations and said their morning prayers en route. They “had perfected a technique for getting compartments to themselves, and even if they had not, it would have taken a hardy outsider to enter a compartment where a swaying, bearded figure stood chanting at the window.”

Daiches thinks that Yiddish may have sounded less outlandish to Scots than to ordinary Englishmen because the Scots language shares some of Yiddish’s Germanic vocabulary and sounds that English lacks. Words like Scots “to hoast,” to cough, which is close to Yiddish hustn, or “lift,” sky, which is akin to Yiddish luft, “air,” exist in considerable numbers. Sometimes the two languages coincide. “More light” in Scots is “mair licht,” which sounds exactly the same as Yiddish mer likht. In fact, Daiches writes, he once conversed with a stationmaster along one of the lines the trebblers traveled and was told by him that his father would speak to them in broad Scots and be answered in Yiddish “with perfectly adequate mutual intelligibility.”

It’s a nice story, but I have my doubts about it. English shares a huge vocabulary with both German and French, but that doesn’t make either of these two languages intelligible to English speakers or vice versa. In any case, whatever the future of Scots (which has been steadily losing ground to standard English for decades) in an independent Scotland, “Scots Yiddish” will not be around to try out on its speakers. Dos iz alts geven in days o’lang syne.