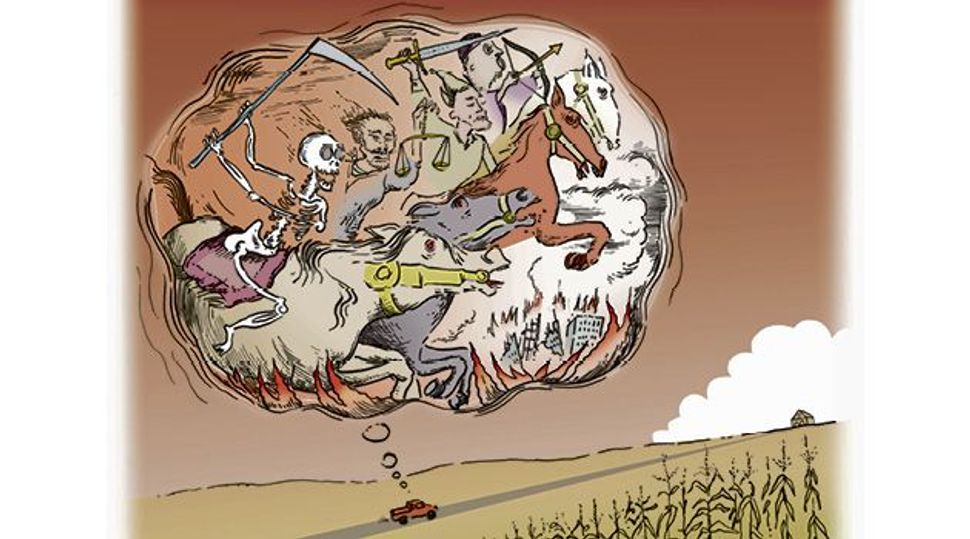 Synagogues in rural Iowa are few and far between for good reason. Out of almost three million residents in the 26th largest state, there are no more than 6,000 Jews, and almost half of them them live in the capital, Des Moines.

So few Jews live — and die —in Iowa that the Jewish Funeral Directors of America lists no member mortuaries in the state.

Author Edna Ferber once lived as a child in Ottumwa, and the twins who wrote syndicated newspaper advice columns, Esther Friedman (Ann Landers) and Pauline Friedman (Abigail Van Buren), were born in Sioux City. But that’s about it for famous Iowa Jews.

After the relatively few Jews born here grow up, they tend to leave, especially if they’re from rural Iowa, which constitutes almost all of the state. Historically, Jews who settled here often were merchants, grocers and scrap iron dealers. Perhaps the most successful were three Jewish brothers, Lytton, Samuel and Marcus Younker, who started a dry goods and clothing store in Keokuk in 1856. Today, Younkers department stores are located throughout the Midwest. Another entrepreneurial Jewish family was the Tenenboms, who started the forerunner of Eagle Food Centers in Davenport in 1893.

Today, if you’re a Jew and find your way to rural Iowa, among endless rows of corn and soybeans, not to mention the state’s 15 million pigs, what do you do? Apart from Postville, the hasidic enclave in northeast Iowa where a slaughterhouse still processes kosher meat and chickens, there aren’t many options.

Welcome to surviving Jewish in the Hawkeye state.

Here are sagas of four very different rural Iowa synagogues, spread throughout the agricultural flyover state that comes into focus on Americans’ radars every four years for the presidential caucuses.

Congregation Adas Israel of Mason City (population: 28,079), the county seat of Cerro Gordo County in north central Iowa, embraces Jews of all stripes — as well as fundamentalist evangelical Christians, some of who gravitate to the synagogue to befriend Jews before the apocalypse wreaks havoc on the world and brings back Jesus. Several evangelicals drive as far as 70 miles to attend a service at 102-year-old Adas Israel, where the monthly highlight is a rousing, multi-sectarian discussion of the Torah.

At its peak, Adas Israel counted 80 families as members prior to World War II. There were so many Jewish members that in 1941, a larger synagogue in Mason City had to be built. Made of brick, with tall, gothic, white-trim windows, the synagogue resembled a classical church from the outside, not surprising since the temple’s architect specialized in Methodist churches.

Today, Adas Israel counts some 20 members. The congregation uses a Reform prayer book, but during the High Holidays it uses a Conservative siddur. Some 30% of the service is conducted in Hebrew.

Jews and non-Jews alike trudge through freezing winters and scorching summers to participate in the Torah readings. “We all get along because we must,” says Michael Libbie, the congregation’s spiritual leader who has driven the 240-mile round trip from Des Moines for more than 25 years.

Adas Israel might serve as a valuable lesson to urban Jews accustomed to the luxury of choosing among synagogues to join in costal cities.

About to break fast at sundown of Yom Kippur last year with a just-barely-assembled minyan, Libbie presided over a table of lox, challah, bagels, salads and kosher wine, essential items he brought with him from Des Moines.

Food can often be a cultural touchstone, especially for Jews. But Jewish food and Iowa are like pumpernickel bread and mayonnaise. All the more reason that some Jews view the treasured delicacies Libbie transported as spiritual nourishment. “It’s a great joy,” Libbie said, “because you don’t miss this food until you lose it.”

Congregation Beth El is located in Fort Dodge (population: 24,751), the county seat of Webster County. The central Iowa synagogue was forced to close in 2000, when members sold the building to the First Presbyterian Church to become a church activities center.

Jews in Fort Dodge date back to the 1880s; in 1924, a synagogue, Tefereth Israel, was founded. The cornerstone for a new building to house congregation Beth El, was laid in 1948 in a residential area of Fort Dodge, with some 45 Jewish families as members. A rabbi’s home was built alongside the new synagogue, and through the years, Beth El employed five full-time rabbis.

“Slowly, the families dwindled. Children grew up and moved from the area. That’s the story of rural Iowa. Almost every child raised here has moved. We’ve always had a hard time getting a minyan,” said Jerry Diamond, 74, who arrived in Fort Dodge from Minneapolis as an 8-year-old when his father started a men’s clothing store in town, which Diamond took over and subsequently closed in 2001. Diamond now lives in Bonita Springs, Florida, during the late fall, winter and early spring.

The last person to celebrate a bar mitzvah at Temple Beth El was Diamond’s own son, and that was 31 years ago. When the building was sold, there were five synagogue members.

The congregation’s memorial boards, Torahs and Megillah, along with boxes of historical records and photographs, were donated to Des Moines and Minneapolis synagogues, Jewish schools and museums.

“It was sad, but it had to be done,” said Diamond. “We didn’t have a choice. I was the last person to turn off the lights.”

If there is a modern success story of Jews in rural Iowa, it might be that of Beth Shalom, located in Fairfield (population: 9,464), the county seat of Jefferson County.

Located near the southeast corner of the state, Fairfield gained fame when defunct Parsons College was bought and transformed into the Maharishi International University (now Maharishi University of Management) in 1974. Founded on the principles of Transcendental Meditation, university faculty and students generally cloistered themselves from local Fairfield residents. In 2001, Maharishi Vedic City, an incorporated municipality, was established next to Fairfield, where all 259 residents are TM followers.

Before 1974, there was one Jewish family in the Fairfield area, but as more and more Jews came to the University, the administration allotted space in the dorms for weekly services, along with a kosher kitchen, said Lewis Denbaum, a member of Congregation Beth Shalom.

Over the last 25 years, Fairfield attracted a multitude of start-up and small investment firms; some city boosters have begun to label Fairfield “Silicorn Valley.” Many of the new entrepreneurial businesses are run by Jews, who gravitated to the bucolic area from Chicago, Los Angeles, New York and Atlanta because of the University’s ties to TM.

In the mid-1980s, the area’s newly settled Jews bought a Baptist church and converted it into a synagogue. One member built a hand-tooled wooden ark to house donated Torahs. At its largest in the mid-1990s, Beth Shalom boasted 120 families, with 45 children in Sunday school. Two or three bar mitzvahs would be celebrated every month in the fall and spring, and on Friday nights, potluck feasts were held at the synagogue before services.

Today, membership has dropped to 70 families, and although the Sunday school ceased to operate five years ago, Beth Shalom is still the largest rural synagogue in the state. The synagogue puts out a weekly newsletter, which includes an analysis of the Torah portion, along with a rumination on Jewish life, written by an Orthodox Jewish physicist in town.

Beth Shalom has no rabbi, and services are usually led by David Matt, a computer engineer and brother of kabbalistic scholar Daniel C. Matt, as well as son of the late Rabbi Hershel Matt, who taught at the Reconstructionist Rabbinical College. The synagogue today affiliates with none of the Reform, Conservative nor Orthodox branches of Judaism. “We have to be all things to all people,” said Denbaum. And, because of that, he says with a laugh, “We’ve gotten into arguments over everything. You name it. We’ve argued over it.”

Like the congregations in Mason City and Fort Dodge, the children of most Jews in town leave Fairfield when they graduate high school, enrolling in out of state colleges, and ultimately settling in metropolitan cities for jobs. Today, all members of Beth Shalom are practitioners of TM, Denbaum said, and for many, their spiritual existence is more firmly entrenched in Transcendental Meditation than in Judaism. “We straddle both worlds,” said Denbaum. “There really isn’t a disconnect.”

“TM and Judaism are both about establishing a connection to your own inner self,” is how current Beth Shalom President Marc Berkowitz explains it.

Keeping kosher to varying degrees isn’t all that difficult, Berkowitz says, even in rural Iowa, since almost all Beth Shalom synagogue members are vegetarians. A member of the congregation, he says, “makes killer mock-chopped chicken liver,” and several women in the synagogue regularly bake rugelach and challah.

As the synagogue reaches its own plateau of maturity, the issue of a Jewish cemetery in town is something that some members talk about with some regularity. The closest Jewish cemetery is in Ottumwa, 25 miles away, which was once operated by Congregation B’nai Jacob. But that synagogue, built in 1915 when there were upwards of 400 members, is battling to stay alive today.

Fewer than a half a dozen Jews, if that, attend Saturday morning Shabbat at the Ottumwa synagogue. “Please call to confirm that services are being held,” reads a synagogue advisory, which lists a phone number that has been disconnected.

Stephen G. Bloom is a professor of journalism at the University of Iowa. He is the author of “Postville: A Clash of Cultures in Heartland America.” He has lived in Iowa for 21 years and has visited each of the state’s 99 counties. He is Midwest editor of the magazine http://narrative.ly