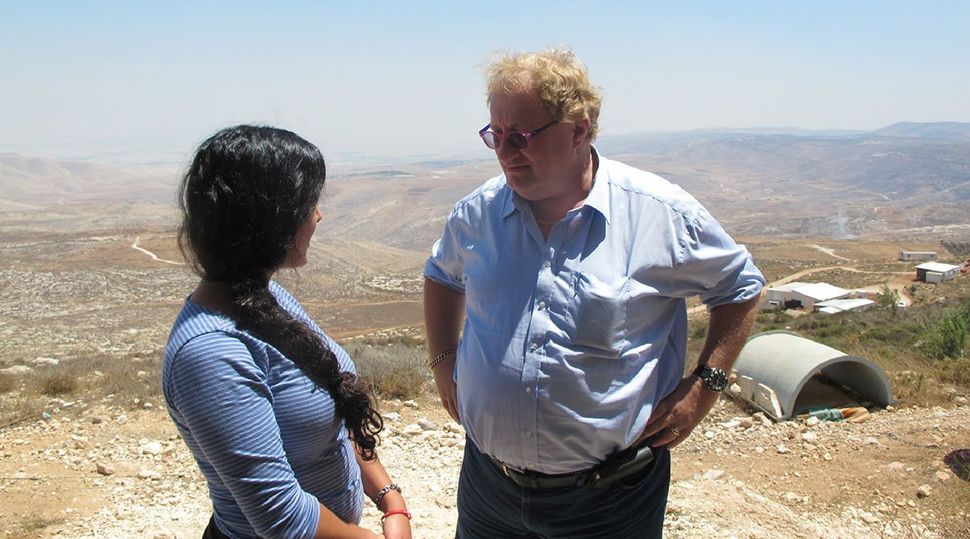 An Outpost of Progress: The author on assignment. Image by Isi Tenenbom

Ten young people, more or less, were congregating in front Benjamin Netanyahu’s residence late on a Saturday night and repeatedly shouting, “Bibi, resign! Bibi, resign! Bibi, resign!” Bibi didn’t seem to be here; in any case, he wasn’t answering. It was August, during the height of the conflict, and the young people here were ultra-rightists, the kind you’d find in the Beitar Jerusalem soccer field. They seemed upset. They shouted, they sang, and then they got busy with their smartphones by taking videos of each other.

Ten is a good number for an Orthodox prayer but not so much for a demonstration. Where were all the famed super rightists who want to crush Hamas and take over Gaza again, and why weren’t they here? I wasn’t really sure and so I decided to find the super rightists at their homes, not at Bibi’s. Best place to find them, I figured, would be in a settlement — or better yet, in an outpost.

I reached a remote outpost — God only knows its name — late in the afternoon a couple of days later and I met a bunch of young women who told me that in last election they voted for Michael Ben-Ari, a far-far right-winger. “What do you think of the way Bibi conducts the Gaza war these days?” I asked two of them. “When I see Bibi’s face on the TV screen I feel safe,” one of the two answered as the other nodded in approval. Everyone else seemed to agree.

I left the outpost and moved to another, kilometers away. “What do you think of Bibi these days?” I asked a bearded man with a yarmulke bigger than God. “I’m very happy with Bibi. He has a brilliant strategy here and he’s executing it flawlessly.”

I spent hours trying to catch a settler who hated Bibi but I couldn’t find one. What happened to the people who on normal days hate Bibi more than they hate Hamas?

I drove to Tel Aviv and made the rounds in various cafes, where I felt sure I’d catch anti-Bibi people. I smiled when I passed graffiti that read “Bibi is a name of a dog.” I’m in the right place, I thought.

Well, not really. “This war was justified,” one man told me. “Bibi follows a strategy which strikes me as being well-planned and I’m very satisfied.” Other coffee drinkers I met tell me basically the same thing.

“Bibi’s strategy” is a phrase I heard from many Israelis, on the right and on the left, but no one yet can explain to me in detail what his strategy actually is.

Does Bibi really have a strategy? Listening to Bibi speaking to his people via TV, on the occasions he does, the only thing I can tell is this: The man seems to change his aims every Monday and Thursday, never sticking to one plan. Could it be that the people believe Bibi has a strategy, brilliant and well planned, just because he changes his mind so often?

I actually spent many a time at Gaza’s border in an attempt to comprehend Bibi’s genius, but I failed over and over. I saw soldiers going in to Gaza, presumably to stop rockets flying into Israel, and I saw them positioning themselves more or less at the outskirts of Gaza. They were shooting right and left, God knows at what, but then did not advance much. And then they withdrew. Did the rock ets stop? No.

Where, in God’s name, could I find a Jew who was not a Bibi fan??

Rabbi Meir Hirsch, the “foreign minister” of the extreme ultra-Orthodox sect known as Neturei Karta, could be my man, I thought. I went to him.

We sat down in the living room of his abode and he gave me his business card, which read, “Leader of Neturei Karta, Palestine.” He told me that Bibi, like all Zionists alive and dead, is a criminal. Meir, I learned during our talk, prefers Iran’s leaders. When I asked him about their atomic bombs,which Bibi is known to be scared of, Meir quoted a late community rabbi who said that he wouldn’t mind losing his own life in an atomic bomb attack if that was the price he would have to pay for the bigger cause of having Israel erased from the face of the earth.

I’m more of a selfish guy and I don’t want my body to melt alive in the middle of Jerusalem and so I left the rabbi to enjoy his wet dreams without me.

Days passed and I finally found a soul mate: a visiting German writer who didn’t agree with Bibi but also didn’t want to sacrifice his life for any Iranian. The man was not Jewish but that’s okay with me. We got to talking about this and that and we both agreed that we needed a little break from the rockets flying here. We drove to a little settlement called Carmel where, we were told, they make and sell all kinds of herbal medicinal products that could potentially cure people from a long list of diseases, including asthma and muscle pains. Perhaps, the settlers had also invented some kind of oil that could protect us from flying rockets.

When we got to Carmel, happy as little children, we met a super intellectual who told us of a certain theory that he shares with Tsvi Misinai. Who’s Zvi? What’s the theory? Well, here goes: About 90% of Palestinians are descendants of Jews who lived here two thousand years ago. Quite a number of Palestinians, he told us, keep this or that Jewish custom to this very day.

This put the war between Israel and Hamas in a totally different light: Imam Benjamin Netanyahu against Rabbi Ismail Haniyeh.

The herbal settler intellectual saw our amazement at his theory, but it didn’t surprise him. The other day, he said, a German journalist approached him with a unique request: Could you connect me, the journalist asked, with a Nazi convert to Judaism in your settlement?

In the German journalist’s mind, settlers and Nazis apparently had much in common, but he wanted to prove it scientifically.

I loudly laughed at this but my new soul mate suddenly got a huge headache and walked out.

“What happened to you?” I asked him.

“Well, quite a bit,” he says. He spent the last few days in Tel Aviv, where cool-looking Jews told him of all the horrible stuff settlers were doing on a daily basis and he of course believed them. As a result, he expected the herbalist here to carry a gun and shoot a couple of Arab kids right in front of his eyes. Excellent material for a book, no doubt, but now the “evil settler” is telling him that the Palestinians are Jews. “I’m very confused,” the German writer told me, puffing on a French cigarette.

Poor German: What book is he going to write now?

Poor me too: Our herbalist doesn’t have any special anti-rocket oil.

Back at Bibi’s residence, I found a group of women, ladies on the far-left part of politics, who identified themselves as Arab and Jewish women for peace. They were sitting in a circle and talking quietly to each other; they didn’t shout or sing, and they weren’t taking photos of each other. I felt touched by the presence of Arab and Jewish ladies talking peace to each other, and so I raised my right hand to ask a question: “Could you please tell me how many of you ladies are Arab and how many of you are Jewish?”

I shouldn’t have been surprised. This is the nth time I’ve gone to an Arab-slash-Jewish peace event with no Arab in sight. These Jews want to believe in something, no matter what the reality is.

Tuvia Tenenbom is the author of ‘I Sleep in Hitler’s Room.’ He is currently finishing work on his next book, ‘Alone Among Jews.’