Why Isn’t Dolph Schayes as Famous as Sandy Koufax or Hank Greenberg? 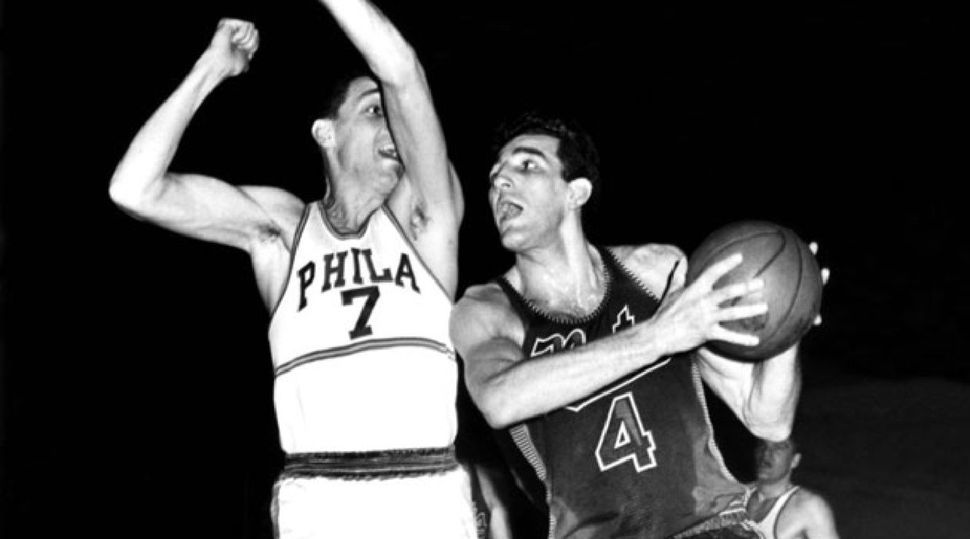 Schayes’ Rebellion: Dolph Schayes signed with the Syracuse Nationals out of college in the early days of pro basketball. Image by NBA.COM

Basketball player Dolph Schayes should be as famous as baseball slugger Hank Greenberg. Like Greenberg, Schayes was the first Jewish star in his sport. During his playing career, from 1948 to 1964, Schayes was a 12-time All-Star; in 1996, the 6-foot-7-inch Schayes was even named one of the 50 greatest all-time NBA players.

Yet, except among fans of basketball history, Schayes remains little known. In “Dolph Schayes and the Rise of Professional Basketball,” Dolph Grundman — the shared first names are merely a coincidence — attempts to remedy that. Grundman’s biography shows how Schayes’s career dovetailed with the rise of professional basketball from a minor, regional game into one that earned its place alongside baseball and football in the national sports pantheon.

The strength of Grundman’s work lies in his scrupulous attention to details, both in reporting Schayes’s life and in offering portraits of the players and coaches who surrounded him. Born to Romanian Jewish immigrants (as was Greenberg) in the Bronx in 1923, Schayes starred for the New York University basketball team from 1945 to 1948. In the early 1950s, gambling scandals nearly destroyed college basketball in New York City, but when Schayes played for NYU, Madison Square Garden was the mecca of college basketball, regularly hosting doubleheaders featuring the nation’s top teams.

Schayes signed with the Syracuse Nationals out of college in the early days of professional basketball. There were two professional leagues (they would soon merge and form the NBA), and such cities as Rochester, New York, and Fort Wayne, Indiana, hosted teams.

Known for his pinpoint shooting, his dogged rebounding, and unsparing work ethic, Schayes led the Nationals to three NBA finals and one championship.

Grundman faithfully recounts Schayes’s career, focusing on the games themselves. Indeed, all but the most ardent fans may find themselves wishing for less play-by-play. Lost amid the accounts of regular seasons and playoffs is a sense of Schayes as a person, even though Grundman had access to Schayes — in his introduction, he recounts a visit to Syracuse to see Schayes, and Schayes is quoted extensively. A hint of Schayes’s feistiness surfaces in descriptions of fights he got into, both on the court as a player and as a fan during one of his son Danny’s NBA games.

The gap between Schayes’s and Greenberg’s fame rests, in part, on U.S. sports history. Baseball was the national pastime in the 1930s and 1940s, when Greenberg played, while the NBA was just making a name for itself during Schayes’s era. Although neither was religious, Greenberg made headlines across the country in 1934, when he sat out a game during Yom Kippur. Schayes became proud of his Jewish heritage after leading a U.S. team in the Maccabiah Games in 1977, but by that time, he was far from the national consciousness.

Grundman’s book, however, doesn’t go deep enough or sufficiently explore weighty issues to make Schayes a household name again. For example, during Schayes’s time in the NBA, the league became integrated. Did Schayes, like Hank Greenberg, offer support to African-American players who would help transform the sport? Some exploration of this issue, and of Schayes’s personality, could have shed more light on perhaps the greatest Jewish basketball player of all time.

Peter Ephross, who has written for The New York Times and Sports Illustrated, edited “Jewish Major Leaguers in Their Own Words: Oral Histories of 23 Players,” published by McFarland in 2012.

Why Isn’t Dolph Schayes as Famous as Sandy Koufax or Hank Greenberg?