What Has Become of the Historic Synagogues of Indiana? 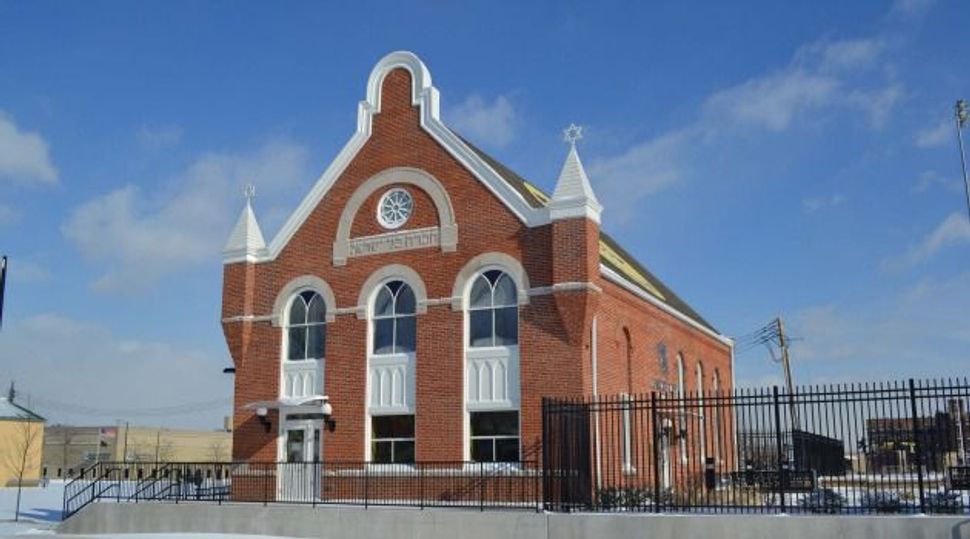 What has become of Indiana’s historic synagogues? The following four historic synagogues were originally built as synagogues and are still standing in Indiana. This list is not exhaustive and it does not include historic Jewish congregations who worshipped in other types of buildings, such as homes and former churches, or other historic Indiana synagogues that have since been demolished.

Temple Israel is the oldest synagogue that was built to be a synagogue and is still standing in Indiana. Dedicated by Rabbi Isaac Mayer Wise, this two-story, round-arch style red brick synagogue humbly displays small windows with smooth stone arches above. Stairs to the left and right of the entrance lead to the sanctuary. For a period of time, the American Red Cross used the building for storage. In 1976, the Unitarian Universalist Church purchased the synagogue and converted the sanctuary to suit their worship style. It is currently Hope Cathedral. In 1982, Temple Israel was placed on the National Register of Historic Places.

Rabbi Isaac Mayer Wise also dedicated the second oldest synagogue still standing in Indiana. Its Gothic-style red brick architecture boasts stunning stained glass windows depicting scenes of King David’s life, as well as Stars of David, the Tabernacle and the Ark of the Covenant. The original interior light fixtures and ornately carved wooden Aron Kodesh still grace this 1,430-square-foot, one-room synagogue. The last Jewish services were held in 1954 and after that, various church congregations occupied the building until 1984. The Ligonier Public Library has owned the synagogue since 1985; currently, it houses a museum for the Ligonier Historical Society. It was placed on the National Register of Historic Places in 1989 and received an Indiana Historical Marker in 2014. Asking price: $50,000.

This synagogue is a striking example of Romanesque revival red brick architecture. Two square brick tourelles on the front corners of the building are topped with pyramids and metal Star of David finials. “Congregation B’nai Israel” is carved in Hebrew letters in limestone above the entrance. The synagogue was the former home of an Eastern European Orthodox congregation; the last Jewish services were held in the building in 1990, after which it was donated to Indiana Landmarks Foundation. It remained vacant until 2012, when Andrew Berlin, owner of the South Bend Silver Hawks team, bought and renovated it to the tune of $1 million. Now part of the baseball stadium, the building operates as the team’s gift shop. It was placed on the National Register of Historic Places in 2013.

Originally built for $150,000 and coming in at a whopping 13,000 square feet, the synagogue features neo-classical Bedford stone architecture and includes interior art deco motifs. Ornate painted plasterwork decorates the walls, ceiling and chandeliers with Stars of David hang throughout the sanctuary, complete with a balcony. Congregation Beth El and later, B’nai Torah, occupied this impressive two-story synagogue until 1967. Several different church congregations worshipped there until 2010. Abandoned, the building fell into disrepair. Purchased from the city in 2013 for $50,000 by the Indiana Landmarks Foundation, the Mapleton-Fall Creek Development Corporation, and the Temple Heritage Center are currently raising funds for the stabilization and restoration of the synagogue.

What Has Become of the Historic Synagogues of Indiana?