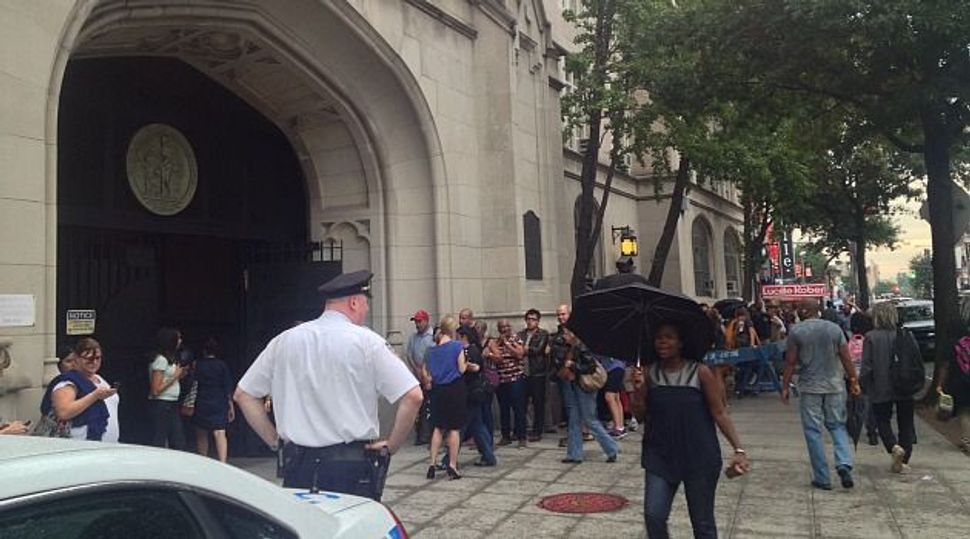 Who says you can’t go home again? Singer Neil Diamond returned to Brooklyn Monday for a surprise performance at the high school he attended in the 1950s.

Hundreds of fans lined up outside Erasmus Hall High School in the Flatbush section hoping to snag free tickets to hear a rare intimate performance by the entertainer sometimes called “the Jewish Elvis.”

“My buddy [said], ‘Can you cut out of work? We’re going on an adventure,’” said Henry Zervas, a 26-year-old Jersey City native hoping to see his first Diamond concert.

Other fans travelled from further afield. Jackie Beck, who sported a homemade “Diamond Girl” t-shirt, drove with her husband from western Pennsylvania.

“It’s so much fun, it’s like an addiction,” said Beck, who has been to 10 of Diamond’s previous concerts. “His songs are so real to life for so many people. He just hooks us all in.”

Born in Coney Island to Jewish parents, Diamond began writing music while he was still in high school at Erasmus. Hit numbers like “Kentucky Woman,” “Cherry, Cherry,” and “Sweet Caroline,” later launched him to superstardom. Despite his success, Diamond had never performed a professional gig in the borough of his birth.

Diamond didn’t hide his Jewish background: he starred in a remake of the 1920s movie, “The Jazz Singer,” about an Orthodox cantor who leaves the synagogue for a career in secular music. And unlike Jewish entertainers who took non-Jewish stage names, Diamond reportedly considered using the stage name “Noah Kaminsky.”

Some Jewish fans waiting for tickets hadn’t given much thought to the singer’s religious background, however. “It doesn’t mean anything to me that he’s Jewish,” said Adam Bernstein, 50. “He’s circumcised – that I know.”

Other famous musicians attended Erasmus, including Mae West and Barbra Streisand, who reportedly sang with Diamond in the school chorus.

“Music was everything here back then,” said Sandy Jones, a 1978 Erasmus alumna who hadn’t returned to her high school since her graduation, and stood in a drizzle waiting to enter the concert.

Steinberg, who counts “Sweet Caroline” as her favorite Diamond song, said Diamond’s tunes stir up childhood memories. “No matter where I am in the world, [his music] takes me back to Brooklyn,” she said.

The concert was held in the lead-up to the release of his new record “Melody Road,” which is due out October 21. Crowds flocked to the school after Diamond announced the gig on social media.

As the show’s start drew closer, some fans looking for ticket grew more desperate. Zervas said he was offered $100, but declined to sell his ticket. 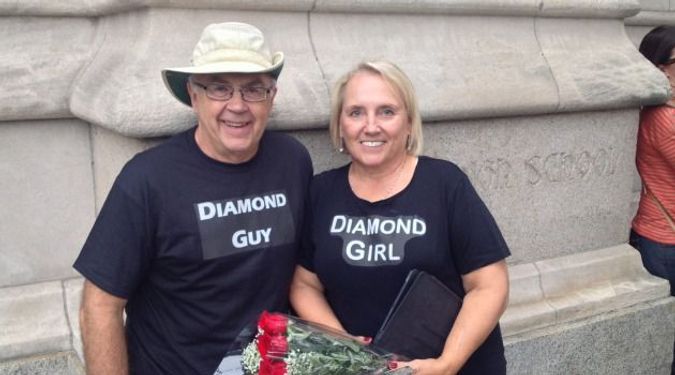 Dennis and Jackie Beck drove from Pennsylvania after hearing about the show. Image by hody nemes