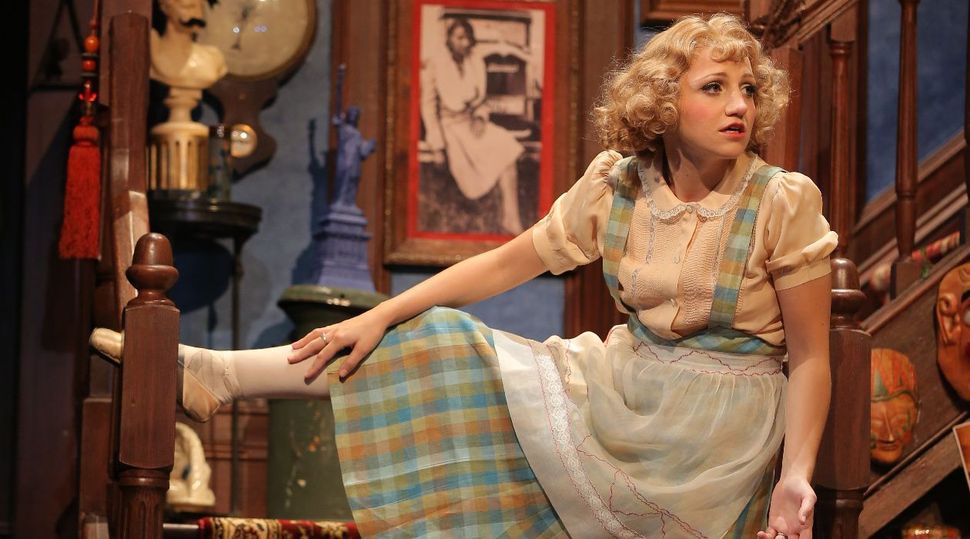 Genius Physical Comedian: Annaleigh Ashford plays the dim-witted Essie in “You Can’t Take It With You,” currently on stage at Broadway’s Longacre Theatre Image by Joan Marcus

“You Can’t Take It With You” sure isn’t going anywhere. It was Moss Hart and George S. Kaufmann’s third play and second big hit, and it won the Pulitzer Prize in 1937. The next year, Frank Capra adapted it for the movies, with Jimmy Stewart as his star, and the film won two Oscars, for Best Picture and Best Director. Over the next half-century, the play was revived three times on Broadway, and it became a staple of community and high school theaters. Sunday night at the Longacre Theatre, it opened in its fourth Broadway revival.

Some will tell you that “You Can’t Take It With You” is a meticulously constructed, unremittingly amusing, classic comedy. Others will insist it is a dated, old-fashioned, chestnut of a trifle (or is that trifle of a chestnut?). On the evidence presented at the Longacre, it is both. (It is also, perhaps, a window into its two Jewish creators’ feelings toward the gentile world at large.) Director Scott Ellis has provided a bright and effervescent staging, with a fantastic cast clearly having an awfully good time, on a sprawling and bric-a-brac-filled Victorian house of a set by David Rockwell that gets its own entrance applause. But as much as one enjoys oneself here — and one certainly enjoys oneself — one also can’t shake the feeling, “In the 1930s, this is what they gave Pulitzers to?”

The Depression was a different era onstage, of course, a pre-television time of Ziegfeldian follies, light entertainments, and trunk-song musical revues. You Can’t Take It With You introduces us to the free-thinking Sycamore family, three generations under one Morningside Heights roof, and considers the fallout when a daughter of this family falls in love with the son of a prim, proper one.

Grandpa (James Earl Jones, stately and sly) stopped working one day 35 years ago — “He started up to his office in the elevator and came right down again” — because he decided work got in the way of enjoying himself. Now, he collects snakes and attends commencements and hasn’t paid any income tax in 24 years, because he doesn’t believe in it. (Yes, that’s Sixteenth Amendment humor right there.) His daughter, Penny (a perfectly, drolly daffy Kristine Nielsen), is playwright of unproduced melodramas. Her husband, Paul (Mark Linn-Baker), spends his time in the basement making amateur fireworks with Mr. DePinna (Patrick Kerr), the erstwhile iceman who cameth one day and never left.

Their dim-witted daughter, Essie (Annaleigh Ashford, quite possibly a genius physical comedian) fancies herself a ballet dancer, although she’s terrible. Essie’s devoted and excitable husband, Ed (Will Brill), plays xylophone accompaniment for his wife’s dancing and is an amateur printer who rolls off the press phrases he happens to like the sound of, including “Dyamite the White House!” and “God is the State; the State is God!” The household includes a simpatico cook , Rheba (Crystal Dickinson), who frequently serves Corn Flakes for dinner; her boyfriend, Donald (Marc Damon Johnson), who does odd jobs; and Mr. Kolenkhov (Reg Rogers), Essie’s ballet instructor, a tempestuous Russian émigré ongoingly infuriated by the news from back home.

Finally, there’s the “normal” daughter, Alice. Played by Rose Byrne in her very capable Broadway debut, Alice holds down an office job on Wall Street, where she’s fallen in love with the boss’s son, a company vice-president. Handsome, tuxedoed Tony Kirby (Franz Kranz) asks Alice to marry him, but she just doesn’t see how it can work—their families are too different. Still, she agrees, and a dinner is set for the clans to meet. But when the Kirbys arrive on the wrong night — Mr. Kirby (Byron Jennings, no less) in tails and Mrs. Kirby (Johanna Day) in an evening gown, while all the Sycamores are up to their usual hijinks, plus with a drunken actress (Julie Halston, at her Julie Halstonest) passed out on the couch — things seem bound to end badly.

They do, of course. Throughout the second act, as food fails to materialize, Penny begins a word-association game that accidently drives Mr. and Mrs. Kirby apart, Mr. Kolenkhov attacks Mr. Kirby — to demonstrate the value wrestling as a hobby, of course — and eventually the house is raided by the feds, who suspect Ed is agitating revolution with his printed phrases and whose suspicious are, they think, confirmed when they find a basement full of gunpowder (for those amateur fireworks). Everyone, including the horrified Kirbys, is hauled off to the clink.

As the curtain comes up on the final act, the Kirbys are adamant that their son can’t marry a girl from such a family, and Alice, agrees. Only stalwart Tony, and wise Grandpa, think otherwise. (Also, Kolenkhov’s great friend the Grand Duchess Olga Katrina, played with czarist aplomb by the regal Elizabeth Ashley, arrives to deliver an amusing bit on the plight of the displaced Russian nobility — she’s a waitress in Times Square; her uncle, Grand Duke Sergei, is an elevator man at Macy’s — and then disappears into the kitchen to make dinner.) Finally, Tony coaxes from his father the admission that this titan of industry, too, would be happier not working. Kirby is converted to Sycamorism, the wedding is on, and everyone is eating blintzes. It’s silly; it’s happy; it says very little, except that everyone should have fun.

Unless, perhaps, there’s something else.

It’s impossible to watch “You Can’t Take It With You” without also think about “Act One,” James Lapine’s dramatization of Hart’s classic showbiz memoir, which came to Lincoln Center Theater in the spring. Hart’s book is a carefully shaped and not entirely true story, but it paints a broadly accurate picture of the creation of the first Kaufman and Hart project, and their first big success, “Once In a Lifetime.” Until his success, Hart was a poor, outerborough, immigrant Jew, desperate for a life in the theater. Kaufman, also Jewish, was by then an Algonquin darling, but he had his own problems, a set of near-crippling neuroses.

These two Jewish men have offered us the story about a self-consciously different family, ensconced on the Upper West Side, no less, with artistic tastes, few inhibitions, odd eating habits, and a maybe-Marxist son-in-law. They’re trying to play along with these Wall Street people, these starchy pillars of society who raise orchids for fun and summer in Maine. And their daughter is convinced that the families can never mesh — until they do. But note how. While Hart and Kaufman each found, both together and separately, massive mainstream success, the Kirby-Sycamore union only worked when the Wasps decided to join the outcasts. In 1948, Hart was nominated for an Oscar for writing the screenplay to “Gentleman’s Agreement. “He lost to the guy who wrote “Miracle on 34th Street.”