The Minivan Rabbi of Mississippi 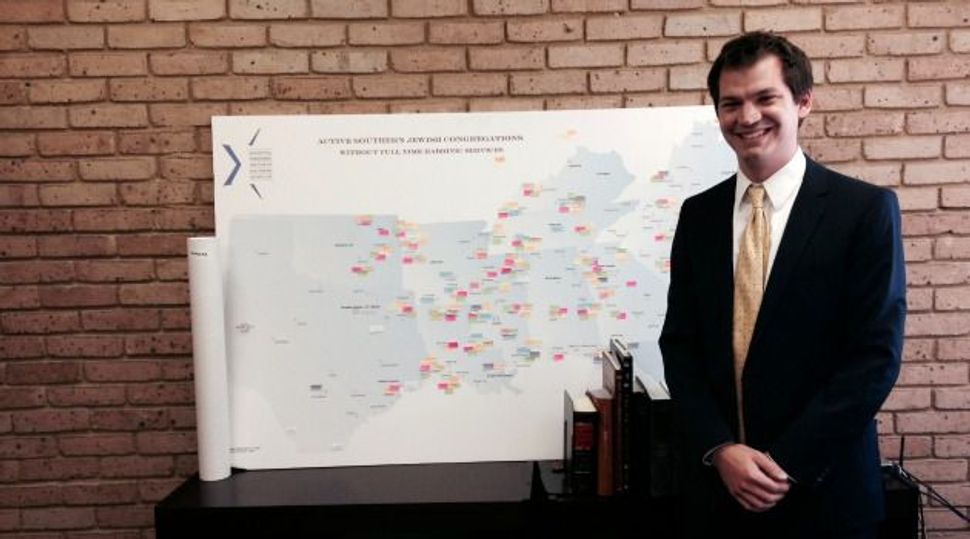 Rabbi Jeremy Simons is the new itinerant rabbi for the Institute of Southern Jewish Life. Image by Anne Cohen 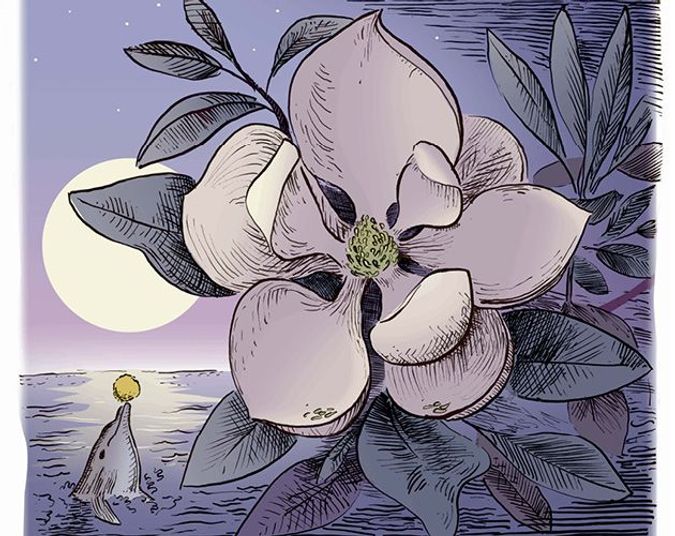 Most rabbis wait for Jews to come to them. Rabbi Jeremy Simons goes to the Jews.

As the new itinerant rabbi for the Institute of Southern Jewish Life, Simons drives through 13 states, serving 110 congregations from Oklahoma to Virginia.

When we met with him in his office at the ISJL, a squat brown building off Highway I-55 in Jackson, Mississippi, he gestured to a large map of the South mounted behind his desk. The biggest challenge so far, he explained, has been “learning where all the Southern states are.”

“It sounds like a crazy job — and I guess it is,” Simons said, adding that the top requirement is “a willingness to drive places.”

But the position also requires a certain amount of idealism. “This job may actually force that upon whoever sits in this chair,” Simons said. “You need to not think about the numbers. You need to think, if there’s three people who want something Jewish here, we’ll bring it to them.”

At 31, Simons has a youthful, infectious smile. This is his first rabbinical position since graduating from Hebrew Union College in Los Angeles earlier this year. When he was a child growing up outside Boston, he spent his summers in Poland, where his grandparents lived. He returned there to do field research in Oświęcim, the town surrounding Auschwitz, for his Ohio State University honors thesis on contemporary Jewish-Polish issues. As a souvenir, he keeps a figurine of the rebbe of Kraków on his desk. 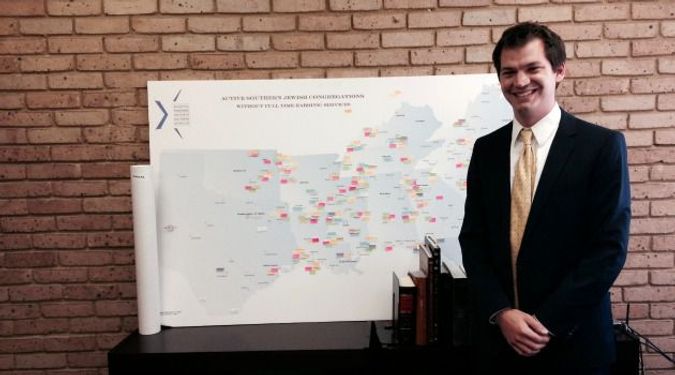 Rabbi Jeremy Simons is the new itinerant rabbi for the Institute of Southern Jewish Life. Image by Anne Cohen

Simons’s predecessor, Rabbi Marshal Klaven, held the position for five years instead of the usual three, before taking up a position as a pulpit rabbi in Galveston, Texas this summer. In 2013 alone, Klaven put 34,504 miles on the ISJL’s 1998 Dodge Caravan. Like any good Southerner, he passed the time listening to Christian sermons on the radio.

“I do believe that inspiration can come from any source. I become the lead singer of whatever band is on the radio,” he said.

Klaven said that he was prepared for the unusual position not only by rabbinical school, but also by his past experience serving as a U.S. Air Force chaplain. “In the military, there’s no division between Orthodox, Reform, Conservative,” he said. “We put those differences aside. When resources are more limited, it pulls us together. [The ISJL is] working with extremely limited resources, but we’re stretching them much further.”

Established in 2000 by Macy Hart, a native Southerner bent on preserving Jewish life in the area, the nondenominational organization offers rabbinic services, in addition to cultural programming and education. Their 5,000-page curriculum is used in Hebrew schools across the South and covers everything from holidays to modern Israel. The ISJL also facilitates community engagement; the interfaith activities the organization hosts reflect the extent to which Southern Jews are enmeshed in their broader communities. The organization even has an in-house historian, Janet Bordelon, charged with building a digital encyclopedia documenting Jewish life in the region.

As of 2011, the ISJL estimated that the 13 states they served were home to 350 congregations, 40% of which do not have a full-time rabbi.

Simons may not have as many miles under his belt as his predecessor, but he’s already provided support to Jews in far-flung communities like Seminole, Oklahoma.

Seminole’s synagogue opens its doors on two occasions: High Holidays and when the rabbi comes to town (usually about once a year). One Friday night in September, seven Jews showed up for a service led by Simons.

“Since many of our congregants haven’t gone to services for a quite a few months, having a chance to pray together is something we look forward to doing,” said Melvin Moran, head of the Seminole community.

The congregation draws Jews from seven surrounding towns. But as for how many Jews actually live in Seminole? “Three,” Moran said. “Myself, my wife and my cousin.”

It wasn’t always that way. “When my children were young, we had 24 children in Sunday school,” Moran said. “If we had a Sunday school today, there would not be a single child.”

Simons said he was inspired by the service. “It struck me when I was there Friday night that we were in a building that normally wouldn’t be open, and lighting Shabbat candles in a place where normally they would not be lit,” he said. “It really made me appreciate this position.” 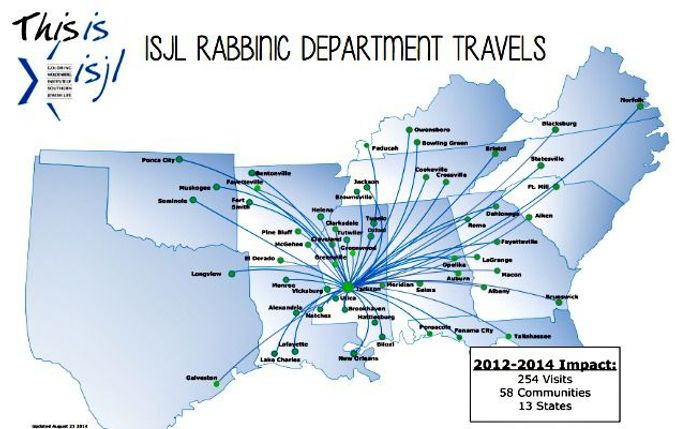 Image by Courtesy of ISJL

Despite the infrequent rabbinic visits, Judaism is a year-round practice for these Southern congregations. “Something I’ve noticed is that there is a tremendous amount of Jewish knowledge in these small Jewish communities,” Simons said. “They’re educated. They’re reading Jewish publications and books.”

And their non-Jewish neighbors are also intrigued by Jewish tradition. In fact, Simons often sees them in synagogue.

“A lot of the people who come to services are not Jewish, or even married to a Jewish person. They’re just interested in the community.”

This year, Simons spent the High Holidays with just such a family.

Paul and Nancy Ballard have been attending Friday night services at Anshe Chesed of Vicksburg, Mississippi, for 25 years.

The Ballards are devout Methodists, but are also essential members of Vicksburg’s dwindling Jewish community. Their 2-year-old grandson Blake is the youngest member.

When we met with them in their home on a bucolic, tree-lined street, it seemed almost impossible they weren’t full-time Jews. While Paul listed his favorite melodies — he sings in the Yom Kippur choir and loves “Avinu Malkeinu” and “Kol Nidre” — Nancy was encouraging Blake to recite the Shema prayer, and urging us to eat more of the chocolate chip cookies she’d run out to buy specially for our visit.

The Ballards first started attending Anshe Chesed when Paul, a retired dentist and former music major, joined the choir. But Nancy made the passing fancy a permanent and meaningful arrangement.

“It had been a really bad week in the office,” Nancy said. “I came home and got dressed and Paul said ‘Where are you going?’ And I said, ‘I’m going to temple.’ And we’ve just been doing it ever since.”

Their daughter Rachel has been attending services since she was 7. Her favorite comfort food? Matzo ball soup. And she doesn’t settle for just any recipe — only her mother’s will do.

As for Rachel’s son Blake, “he doesn’t remember not going,” Nancy said.

The Ballards gave us a tour of their synagogue, where Blake scampered down the aisle, hunting for “temple bugs” (his name for centipedes). There, we met with Anshe Chesed president Stan Kline.

“OK, on life support then.” He added that if the Reform congregation survives two more years, it will reach its 175th anniversary.

As for the Ballards, Kline said: “They’re more Jewish than some of our members. They’re learned people, and they live religion. We couldn’t survive without them.”

In fact, he added, “They’re everything — except Jewish.” 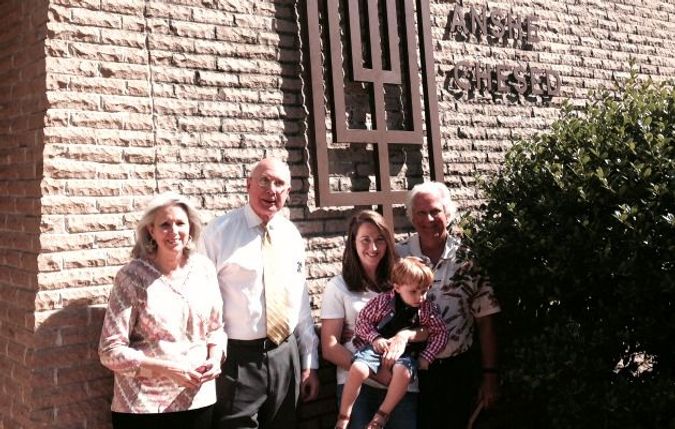 The Ballards are emblematic of a trend that has struck Simons since moving to the South. They’re Christians who see no contradiction in attending synagogue one day and church the next.

“Christian roots are there in the Old Testament,” Paul said. “It’s good for us to connect with that.”

More than that, they want to do right by their Jewish neighbors, who often struggle to fill the pews. “[Mississippi] has always been much richer for the ideas that came out of the Jewish community,” Paul added.

Still, the Ballards see the humor in their situation. Paul likes to joke that “when the last of the real Jews die, they’ll turn the keys to the synagogue over to us. We can be like the Muslim couple that keeps the keys to the Church of the Resurrection in Jerusalem!”

For now, Simons will make sure that doesn’t happen anytime soon. After the High Holidays in Vicksburg, he resumes his busy travel schedule, and though the transition into his new job has been grueling, he sounds upbeat as he considers the long road ahead. “I’m excited for every new community — which means I’ll be excited for the next year and a half.”

Anne Cohen is a staff writer for the Forward. Sigal Samuel is the Forward’s deputy digital media editor.

The Minivan Rabbi of Mississippi