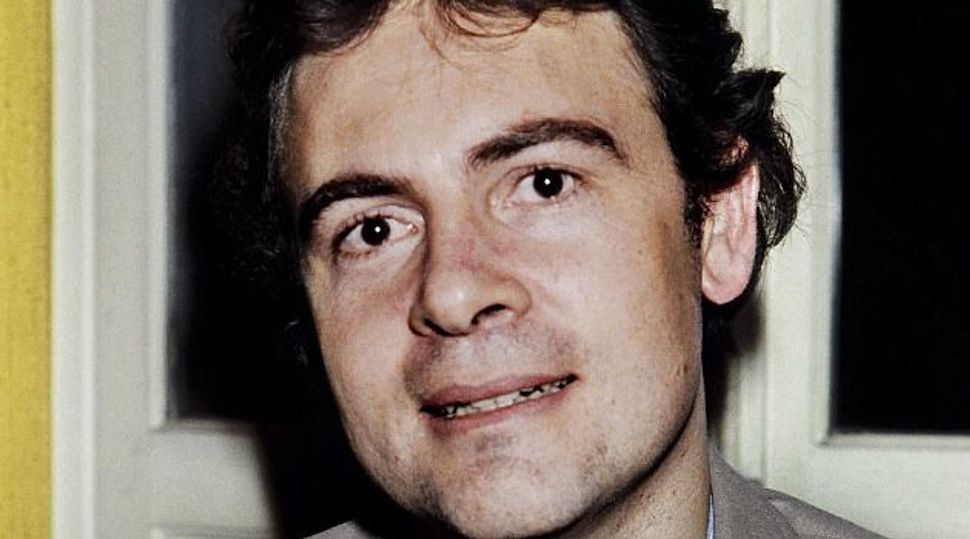 Although London’s betting parlors had claimed the odds-on favorites for this year’s Nobel Prize for literature were Kenya’s Ngũgĩ wa Thiong’o and Japan’s Haruki Murakami, the choice of France’s Patrick Modiano was good news for Jewish readers.

In awkward English, the Nobel Academy referred to Modiano’s obsession with wartime France as the “art of memory with which [Modiano] has evoked the most ungraspable human destinies and uncovered the life-world of the occupation.”

The Occupation, with a capital O, has remained a lasting literary preoccupation in Modiano’s books, only a few of which have been translated into English, including “Night Rounds”; “Out of the Dark”; and Dora Bruder. As Modiano told interviewer Jean-Louis Ezine in 1981: “Like all people without land or roots, I am obsessed by my prehistory. And my prehistory is the troubled and shameful period of the Occupation. I always felt, for obscure familial reasons, that I was born of this nightmare.”

The familial reasons included being born in 1945 in Boulogne-Billancourt outside Paris to Albert Modiano, a Jewish black marketeer who had frequented criminals to survive in defeated Paris, and Louisa Colpijn, a Belgian actress.

Neither had any interest in parenting, and young Modiano was raised by relatives and in public institutions. Modiano, who grew to be 6-foot-6, was emotionally vulnerable, at times seeming like a bashful giraffe grazing over his chosen domain of letters.

He became especially close to his younger brother Rudy, who died of leukemia at age ten in 1957. Rudy was buried in the Jewish section of Père Lachaise cemetery, by coincidence close to the grave of Italian Jewish painter Amedeo Modigliani. Modiano would never forget this early loss and dedicated eight of his novels to Rudy.

Others would never forget the young Modiano, tormented by his family’s murky past and obliviousness to him; he went through a period of sniffing ether and his first published text in 1966 was about LSD. Myriam Anissimov, the French Jewish biographer of Primo Levi, Romain Gary, and Vasily Grossman, was an early friend captivated by young Modiano. In an autobiographical novel, “Nocturnal Days” (2014), Anissimov describes a 1960s love affair with a young man named Arturo in whom she found the “paleness, the grace of Amedeo Clemente Modigliani.”

Like Modiano/Modigliani, Arturo is haunted by villainous figures from the Nazi era, some of them collaborationist Jews such as the author Maurice Sachs and the iron supplier Joseph Joanovici, who worked with both sides of the conflict, and who play a role in Modiano’s fiction. In “Le Resquise” (1975), a previous novel by Anissimov, (the title is a punning reference to the expression “l’heure exquise” or exquisite moment) Modiano appears as another amour, this time named Antoine, an elongated writer two meters tall who is likewise fixated on the years of collaboration with the German foe.

Awareness of his own flawed development underlined Modianos’s urgent interest in the bad choices made by others. At fifteen he ran away from home. Intermittently living with his penniless mother, to earn money Modiano admits stealing some rare volumes from private collections and libraries and reselling them to book dealers, occasionally even adding forged inscriptions to increase their value. His father considered him a “thug,” called the police on him once, and also tried unsuccessfully to have his son join the French army against his will.

A song with lyrics by Modiano.

These checkered beginnings may have added to the sense of identification felt by Modiano when he read in an issue of Paris-Soir newspaper from 1941 a personal ad in which a Jewish couple were searching for their runaway fifteen-year-old daughter, Dora Bruder. Modiano was struck by the poignancy of the brief idealistic window of opportunity when Jews in France could still appeal to the authorities for help with a rebellious child, before the full force of the Occupation crashed down on them.

Modiano sought the help of Serge Klarsfeld, the noted French historian of the Nazi deportation, to find out more about Dora. “Dora Bruder” (1997) is atypically heavy with concrete details for a Modiano work, since with Klarsfeld’s help, Modiano managed to arrive at more certainties than he ever could about his own father’s ambiguous dealings, arrests and liberations, and other details permanently lost to time.

Modiano’s debt to Klarsfeld was clear, at least to Klarsfeld, who wrote the former in April 1997 a letter reproduced in a volume of documents about Modiano published by L’Herne in 2012:

“The investigation, such as you narrate it, is more novelistic than truthful, because you delete me and God knows how I worked to discover and collect information about Dora and send it to you. How could you make me disappear? […] Might you be in love with Dora or her ghost and since we sought her together, you intend to keep her for yourself ?”

Modiano’s investigations are indeed at times like those of an infatuated detective, bewitched by his subject as he puzzles over the meaning of documents and other ephemeral data such as street addresses and phone numbers. As L’Éxpress magazine noted, no fewer than five different characters in five Modiano novels, who live in different places are given the same phone number, AUTeuil 15-28, which presumably has a private incantatory aura for the writer. Pierre Assouline, the French Jewish critic and biographer of the Belgian detective novelist Georges Simenon, wrote in September, “It’s not for nothing that Modiano is seen as the heir of Simenon.”

Yet in his relentlessly detailed fictional quest over questions of identity, lost and sometimes nefarious actions of the past, Modiano retains a novelist’s prerogative for romanticizing his subject matter. “The Journal of Helene Berr”, first published in France in 2008, recounts how an attractive young French Jewish woman from a privileged family was gradually affected by anti-Semitic persecution.

Berr (1921–1945) would ultimately be murdered at Bergen-Belsen concentration camp. In his preface to the French edition, Modiano describes his close identification with Berr as reader: “On each page, we are with her, in the present tense. From day to day, we accompany the one who sometimes felt so alone in Occupied Paris. Her voice is so near, in the silence of that Paris…At the threshold of this book, we must fall silent now, listening to the voice of Helen and walk by her side. A voice and presence that will accompany us all of our lives.”

Passionately following Berr’s trajectory, Modiano retraced her steps in Paris and Neuilly-sur-Seine to better sense her inner emotions, “to understand what her solitude must have been.”

Even before the earth-shaking hoopla of the Nobel announcement, Modiano was never really solitary. Married since 1970 to Dominique Zehrfuss, an artist and jewellery designer of Tunisian Jewish origin, he lives in a spacious apartment in Paris’ chic Saint-Sulpice neighbourhood. The couple has raised two daughters.

It is to be hoped that this remarkable writer can soon regain the tranquillity necessary to pursue his troubled existential search which has produced so many valuable books already, reflecting the tragedies of contemporary Jewish history.

Benjamin Ivry is a regular contrubutor to the Forward.