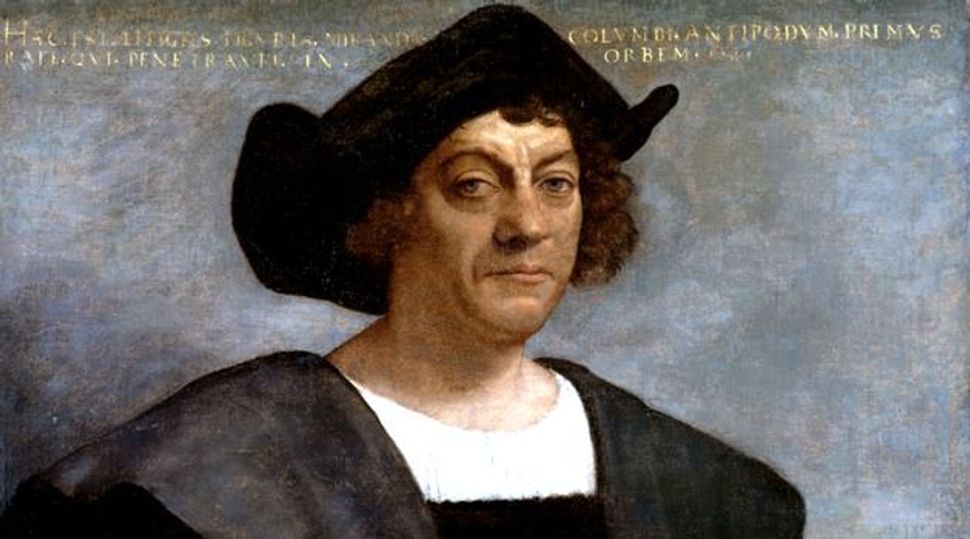 (Haaretz) — On August 3, 1492, just three days after the deadline given to Spain’s large and vibrant Jewish community to convert to Christianity or leave the country for ever, three ships – the Niña, Pinta, and Santa Maria – set sail from the port in Palos de la Frontera West.

They were heading for the rich spice markets in Asia. We all know where they wound up.

Much has been written about the supposed “concealed” Jewish identity of Christopher Columbus, leader of the voyage. But while the theory is plausible, it cannot be proved, and is based on rather strained circumstantial evidence.Yet one person on the voyage had unarguably been a Jew, though he converted shortly before setting out to the deep blue sea.

Luis de Torres was apparently born Yosef ben HaLevi HaIvri. He was the voyage’s interpreter. Columbus hired de Torres, who spoke Portuguese, Hebrew, Arabic, and Aramaic, believing that he could converse with the Jews they would find in the court of the Chinese emperor and with the merchants in the markets of the Orient.

After a brief pit stop in the Canary Islands, the voyage pressed westward. They reached a small island in what is known today as the Bahamas (or the Turks and Caicos), though which island exactly remains disputed. In any case they made shore on October 12, and Columbus claimed the island for Spain, naming it San Salvador.

Shortly after, the voyage continued in search of the mainland, though they didn’t actually reach it on this voyage. Instead they landed on the shore of Cuba on October 28.

A few days later, on November 2, Columbus sent a two-man expedition inland to scout the island and make contact with the native inhabitants. The two men were de Torres and the sailor Rodrigo de Jerez.

They found a village of native Americans, who received them amicably and with great honors. When they returned four days later they reported smoking tobacco, thereby becoming the first westerners to partake in this vice.

The car manufacturing mogul and confirmed anti-Semite Henry Ford had this to say about the incident in “The International Jew”: “Luis de Torres was the first man ashore, the first to discover the use of tobacco; he settled in Cuba and may be said to be the father of Jewish control of tobacco business as it exists today.”

The fleet set sail back to Spain on January 15but de Torres and 38 other sailors stayed behind in Cuba, in a settlement that Columbus called La Navidad. De Torres was not however to become a tobacco magnate as Ford implies.

When Columbus returned on November 27, 1493, he found the village destroyed and its inhabitants, including de Torres, all dead. De Torres’ widow Catalina Sánchez received a grant to compensate her for her loss over a decade later. The only synagogue in the Bahamas, established in Freeport in 1972 was named after de Torres, the first Jew in the New World.

Thus the life of the first “American Jew” was short and ended abruptly and violently, but over the following decades many Jews would follow in de Torres’ footsteps. The first were Spanish and Portuguese “Marranos,” recent converts, who took the colonization of the Americas as an opportunity to escape the persecution of the Spanish Inquisition – though Inquisition tribunals were set up in the New World by the 1570s.

A group of Marrano Jews fleeing persecution in Brazil in 1654 settled in the Dutch colony of New Amsterdam, soon to become New York. These were the first Jews in North America. That very year they founded Congregation Shearith Israel, currently on the Upper West Side.

A few years later, in 1658, a group of Sephardic Jews settled in Newport, Rhode Island, founding the Jeshuat Israel congregation. In 1763 this congregation inaugurated the Touro Synagogue, the oldest synagogue still standing in the United States. By 1700, Jews were living in many of the colonies of North America, and synagogues were springing up in every major city. But the Jewish community remained small until the second half of the 19th century, when a mass migration from the Russian Empire brought hundreds of thousands of Jews to America’s shores.