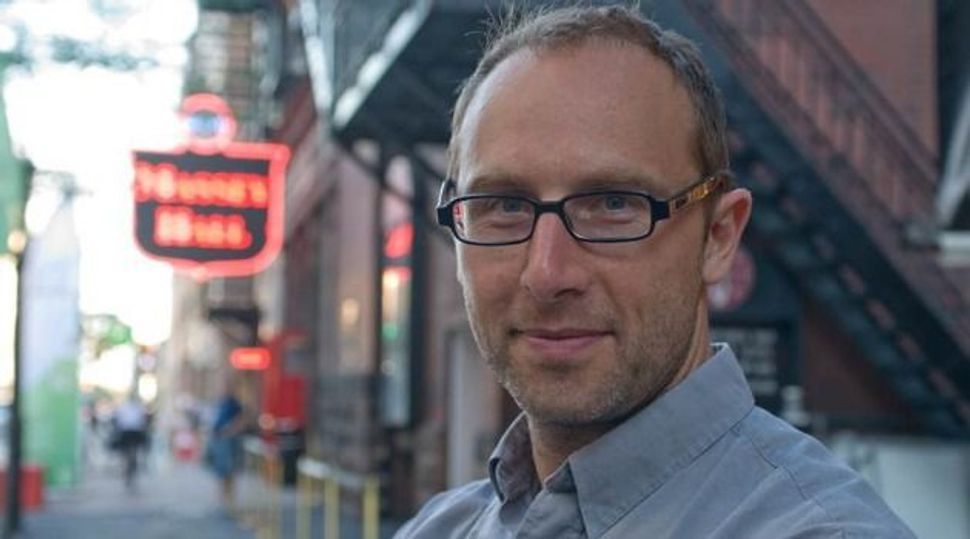 Immigrant Chronicler: The Latvian-born Bezmozgis is the director of the film based on his story, ‘Natasha.’ Image by David Franco

The first thing I noticed about the writer David Bezmozgis when I sat down to breakfast with him in Brooklyn in late September was the tattoo on his forearm — a blue cursive Cyrillic D framed by a diamond. I first met Bezmozgis in 2010, and we’ve since become friends, and I’ve never shaken the impression that his personality — serious, restrained, focused — is a perfect reflection of his fiction. In his much lauded 2004 collection of short stories, “Natasha,” and his subsequent two books, including the recently published “The Betrayers,” his voice is not of the voluble sort, not bellowing or urgent or hysterical — not, in short, the kind of voice that might get a tattoo.

His explanation restored order. The tattoo was the logo of Dynamo Sports Club, the legendary Soviet gym where his father worked, at the Riga branch, as a head administrator and weightlifting coach before the family immigrated to Canada in 1980. In “Roman Berman, Massage Therapist,” one of the strongest stories in “Natasha,” Berman, based on Bezmozgis’s own father, is a former Soviet official at the Ministry of Sport who, after emigrating, works by day at a chocolate factory and studies by night to be a massage therapist, and eventually tries and fails to open his own practice at a Toronto strip mall. It’s a familiarly sad immigrant story of a deracinated and therefore diminished life.

Bezmozgis doesn’t put it this way, but the tattoo can’t but be a deliberate homage to another, earlier world that does not exist anymore, a world in which his father, for one, had power. I might be reading too much into the blue ink, but it’s a symbol of the past, his parents’ history — he was only 6 when his family left Soviet Latvia — and as such it hints, too, at his central creative dilemma as a writer. The further those stories of immigrant struggle recede, and the more the Soviet Jewish community follows the well-worn path of acculturation and assimilation, the more he himself arrives at what he calls a “crossroads”: There is no longer an obvious subject for him to write about.

“I don’t know what else to say about it,” Bezmozgis admitted to me, speaking of the Soviet Jewish experience. “I feel like everything I wanted to say, I have said. I would have to move to Ukraine or something to really experience conflict, legitimate conflict, where it’s happening, but otherwise….”

It’s a sentiment that he articulated in a lecture at Indiana University in February 2013, in which he reiterated Irving Howe’s contention that the immigrant experience is “the lifeblood of Jewish American writing” and once that experience fades into the past, nothing can really replace it as a “shared feature of Jewish particularity.” The wave of Soviet Jewish writing came along later than Roth and Bellow, but this was “really just a new branch sprouting from the old tree.” Bezmozgis felt a responsibility in “Natasha” and in his first novel, “The Free World,” to capture that particular Soviet Jewish immigrant experience. One might also add his films to this endeavor. He has one feature to his name, “Victoria Day,” about Russian Jewish immigrants in Toronto, and he just finished filming an adaptation of his own short story, “Natasha.” But with each new work he moves further away from writing about a living, contemporary community of Soviet Jews and more toward an intellectual interest in an immigrant group he knows well — a dynamic that, to his credit, he recognizes.

“The Free World” was already a step away from his own experiences, the story of the months that the emigrating Krasnansky family spent in Rome on their way between the Soviet Union and the West. Though there are children who represent Bezmozgis’s generation, the most interesting character by far is the family’s patriarch, Samuil, a true-believing Communist who must confront the disaster to which his youthful dream gave birth, a mirror for much of Soviet Jewry’s 20th century.

Bezmozgis’s new book takes a step back even further. Soviet Jews are still at the center; this is the community, after all, that he says he knows the most intimately: “These are the people I understand best.” But the interest now is far from personal. The inception of the book was a moral puzzle he wanted to solve. While working on an obituary of Alexander Lerner, a famous Soviet Jewish dissident, he came across the story of Sanya Lipavsky, the man who publicly betrayed Natan Sharansky, another famous Soviet dissident. Lipavsky’s story interested him because it forced him to wonder, “What sort of life would a man have who betrayed his people for a country that no longer exists?”

The resulting novel focuses on Baruch Kotler, modeled closely after Sharansky. Kotler spends years in the Gulag after being betrayed by a fellow dissident, then has a successful political career in Israel upon his release. As the book opens, Kotler has refused to support the Israeli government’s plan to withdraw unilaterally from settlements in the West Bank, and in retaliation the prime minister’s henchmen have leaked to the press that Kotler is cheating on his wife, Miriam, a devoutly religious woman who campaigned for his release. Kotler decides to avoid the maelstrom by escaping with his mistress, a much younger woman, on a clandestine vacation to the Crimea, where he ends up lodging, by pure coincidence, in the house of the man who betrayed him all those years ago.

Bezmozgis says he was drawn to the story because it gave him an opportunity to write about Israel, where Russian Jews have had an enormous impact politically and socially. If the immigrant experience no longer provides the tension necesarry for writing about this demographic group, this is one area that is rife with it.

“You have to account for what this community is doing in Israel and how it impacts the potential for a peace process,” Bezmozgis said. “And when I was looking at the community and I asked myself how much more do I have to say about these people and what’s interesting to me still, these were things worth talking about, their influence in Israel and the very sad, melancholic end of Ashkenazi Jewry that they represent.”

The book has a taut, almost noir-ish style, reminiscent of Arthur Koestler’s “Darkness at Noon” and Philip Roth’s “The Ghostwriter,” climaxing in a confrontation between the two betrayers in which issues of morality and justice are played out in scenes that seem like they could exist on the stage as well as in a book.

I’m a fan, but I can also see how it represents for Bezmozgis the outer limit of his exploration of this community: Any further, and he would be in the realm of the purely and inaccessibly cerebral. And it has forced him to answer for himself what he thinks counts as a worthy subject of fiction now that he has hit that limit. Soviet Jews in Israel count because he is connected to them and the stakes are so high politically. But what else? And how does he find a new subject where his own personal experience overlaps with a bigger story? He sees value in what is often derisively called “domestic fiction” — he’s currently eating up Karl Ove Knausgaard’s “My Struggle” — but it’s not for him, since this writing is “not reflective of what’s happening in the world at large,” he said.

“We have to ask what’s the extent of our engagement,” Bezmozgis said as we neared the end of our breakfast. “You know what would be great? Bring back the draft. Bring back conscription. That’s what makes Israel so interesting. Because all of a sudden you have skin in the game. But here we wander around with questions like who am I going to be, or feeling neurotic about something we just said. It’s not that there’s no place for that in literature, but we have to ask why there’s so much of that and it doesn’t reflect what’s happening on the front page of most newspapers; why the literature that’s gaining currency is so strongly divorced from what most people are talking about, whether it be ISIS or Ferguson.”

The question for Bezmozgis then is where to find this next place of engagement that can produce compelling stories now that he feels Soviet Jews outside Israel are marching on the path paved by American Jews — into fictional irrelevance.

Gal Beckerman is the opinion editor at the Forward and the author of “When They Come for Us, We’ll Be Gone: The Epic Struggle to Save Soviet Jewry” (Houghton Mifflin Harcourt, 2010).