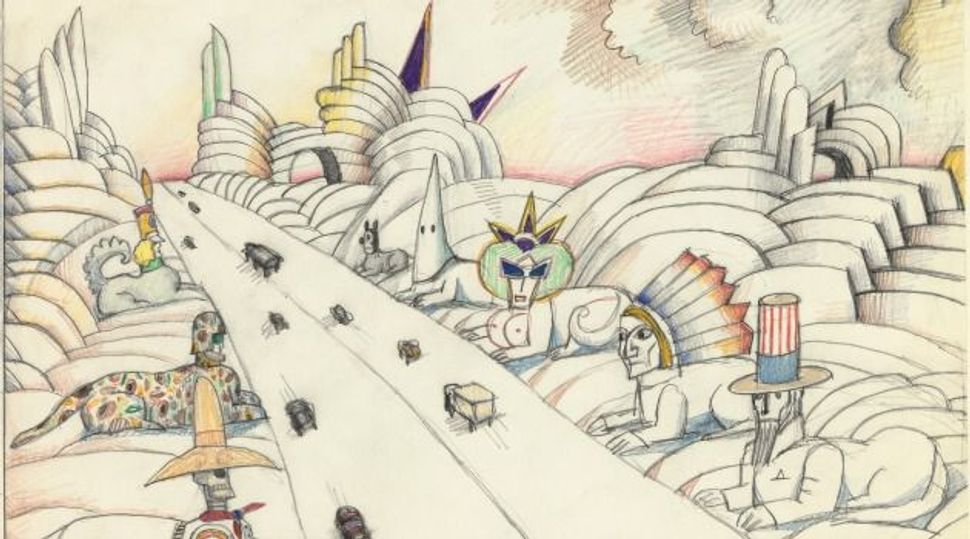 This is the centenary year of artist Saul Steinberg, probably best known for his cover art for The New Yorker, particularly, “View of the World from 9th Avenue,” his illustration of the world as seen by a typically myopic New Yorker.

As part of the celebratory events surrounding the centenary, the Art Institute of Chicago is exhibiting five selected works from the Saul Steinberg Foundation’s recent donation to the museum alongside three works already in the Art Institute’s collection. Steinberg’s work will be also shown in New York at the Pace Gallery through October 18 and at the Center for Architecture from November 10 through December 6.

The Art Institute’s single-room exhibit in the Prints and Drawings wing does not do justice to the breadth and depth of Steinberg’s work, but is worth seeing nonetheless to see up close the intricacy, wit and surprises of his drawings. Even within this small sampling, one can see how Steinberg’s work resists easy classification. His friend, poet Charles Simic, wrote that “[l]ike all immigrants, Steinberg had to reinvent himself, and he did so continuously in his drawings.” Within the same drawing he used multiple techniques of representation — baroque, expressionist, Italian futurist. The fact that he didn’t specialize in one style likely prevented him from being considered as part of the canon of great contemporary American artists.

As the brief commentary in the exhibit states, Steinberg was “committed to the act of drawing,” but was “constantly crossing boundaries into uncharted artistic territory and freely conflating high and low culture.”

“I don’t quite belong to the art, cartoon, or magazine world, so the art world doesn’t quite know where to place me,” Steinberg once said.

This likely explains why the Art Institute doesn’t know quite where to place the exhibit, or what to do with these suggestive works. (I had to ask two staff members of the museum to guide me to the room.) After viewing the Steinberg exhibit, I visited the first-ever retrospective of the weavings of Ethel Stein, now 96, which features her work in several rooms, and includes some curatorial commentary, and a video of her at work. I wished the Steinberg exhibit had received this same treatment, with at least some mention of his biography beyond just his birth date and place.

Steinberg was born in Bucharest, Romania, in 1914, and left to study architecture in Milan in 1933, but was unable to pursue an architectural career because of Italy’s 1938 race laws. Mussolini’s fascist police placed him in a prison camp where he interned for six weeks in 1941; in trying to emigrate to the United, he obtained a year’s visa to the Dominican Republic. His first cartoon in the New Yorker was published in 1941 while he was still in the Dominican Republic. Finally, in 1942, he was able to emigrate to New York, and continued to publish work in the New Yorker until 1999, the year he died.

Simic wrote that during his early years in America, Steinberg “was like an old-time explorer,” making drawings of his trips across America, of the “fabulous creatures and landscapes he encountered.” In “Motels and Highway” (1959), on display in this exhibit, Steinberg depicts the superhighway of the American West not from the typical driver’s perspective, but from an “imagined point of view off to the side,” with nine lanes of insect-like cars.

In his later years, Simic wrote, “[t]he older he grew, the darker his vision became. America changed for him in 1960s. The war in Vietnam and the violence in the cities frightened him.” In one drawing on display at the Art Institute, “Certified Landscape” (1969), in what appears at first glance to be an image of a farm, one can see the repeated image of stiff-legged men in black, some wearing black hats, who could be concentration camp guards. Then you notice repeated cross-sections of what could either be the rumps of cows or the midsections of humans, and the buildings which at first glance seem to be barns are suggestive of the barracks of concentration camps. The drawing suggests the darkness lurking in the typical bucolic American rural landscape.

After visiting the Steinberg exhibit, and trying to mollify my disappointment at its smallness, I visited the massive exhibit “Magritte: The Mystery of the Ordinary, 1926-1938” on the second floor, where I unexpectedly found many fascinating parallels between the work of Magritte and Steinberg, who actually owned one of Magritte’s paintings. Indeed, Steinberg described his homeland Romania as “pure Dada,” and said that Dada (the precursor to surrealism) could not have been invented anywhere else. Steinberg shared with Magritte the surrealist preoccupation with masks. Both artists were anti-bourgeoisie. While surrealists attacked the medium of painting as too bourgeois and conventional, Magritte did not forsake painting but often mimicked the academic style of painting by overdoing it, as in his work, “Attempting the Impossible” (1928), in which he points out the impossibility of truth in a painted image. Steinberg chose drawing as his medium because it was a metier less self-important than painting.

Both Steinberg and Magritte endeavored to defamiliarize the familiar, and both had a preoccupation with words and what they signify or fail to signify. Magritte had an advertising and sign painting background, and Steinberg was heavily influenced by his father’s and uncle’s careers in sign painting, printing, bookbinding and box making. Both had a fascination with graphology, with fonts and typing. Steinberg actually once said he considered himself “a writer who draws.”

One of Steinberg’s favorite images to draw was a mouse that resembled Mickey Mouse. When the New Yorker’s Ian Frazier wrote a centenary appreciation of Steinberg, the magazine ran on its cover a Steinberg drawing of a skeletal cartoon mouse, palette in hand, painting on a canvas. As Frazier wrote, “Steinberg’s mouse seems to enact, simultaneously, violence, terror, art, and cartoon slapstick. In the later years of his life, the terror-mouse became a more common feature of Steinberg’s work, as his initially optimistic vision of America changed.” In the Art Institute exhibit, this mouse appears in one drawing, “Untitled (Las Vegas)” (1989), as one of several iconic American figures symbolizing the hotels lining the Las Vegas strip. Mickey Mouse is a dour, prostrate figure (whose black ears and nose make him appear like he wears a mask); next to him stands a masked KKK figure, who is beside a naked bosomy Statue of Liberty, who sits next to a Native American. Just as we learn in the Magritte exhibit that the figure of the jockey was a stand-in for Magritte, so Mickey Mouse in Steinberg’s later work appears to be a stand-in for Steinberg. The seemingly simplistic mouse is at the same time comic and quintessentially American, and yet suggestive of the horror and darkness within America, and within Steinberg, and his art.