When ‘Klinghoffer’ Played the Heartland 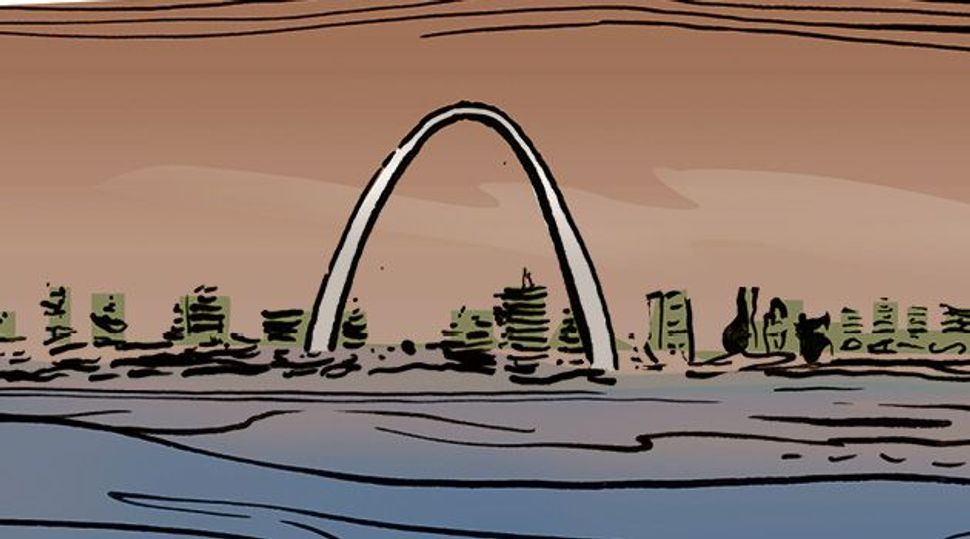 The production of “The Death of Klinghoffer” at the Metropolitan Opera has caused a storm of anger among Jewish leaders and laypeople. Protests have drawn hundreds of Jews to the Met, and top New York Jewish leaders met with Peter Gelb, the Met’s general manager, urging him to cancel the opera. Major Jewish groups, including the governing bodies of the Conservative and Orthodox movements, signed on to a letter penned by the Jewish Community Relations Council of New York that says the opera “runs the risk of legitimizing acts of terror.”

But does it have to be this way?

Three years ago, “Klinghoffer” came to my hometown of St. Louis, where it unleashed a torrent of powerful, vocal… interfaith dialogue.

The city claims an active Jewish population numbering in the tens of thousands, yet there were no Jewish protesters outside the theater, no petitions circulating and no calls to cancel the opera. Instead, Jewish groups joined with Opera Theatre of St. Louis to organize a series of community conversations preceding the opera, which allowed residents to air their opinions about the controversial work.

The story of St. Louis’s improbably civil response to “Klinghoffer” begins, fittingly, in New York City. In 2003, Timothy O’Leary, a young, rising star in the world of opera management, walked into the Brooklyn Academy of Music for a concert performance of “Death of Klinghoffer.” He knew little about the opera’s controversial past (he was a “fresh-faced audience member,” he said), and was unprepared for what happened next.

“That performance was one of the most powerful things I’ve ever attended at a theater,” O’Leary said.

O’Leary sensed that the New Yorkers seated around him, who had passed through the trauma of 9/11 only two years ago, strongly identified with the opera — particularly the grief expressed by Marilyn Klinghoffer over her husband’s murder by terrorists. “I had never been in an audience that felt so deeply an emotional connection to a character onstage,” he said.

The bespectacled, poised O’Leary, who has been described as a “sleek Harry Potter” didn’t soon forget the experience. After six years as a manager at New York City Opera, O’Leary accepted the post of general director at Opera Theatre of St. Louis in 2008 — and his thoughts quickly turned to “Klinghoffer.” Staging “Klinghoffer” seemed a natural choice for a small company that specializes in English works. The group’s 2004 staging of John Adams’s “Nixon in China” helped revive that opera. O’Leary and his artistic director, James Robinson, wondered if it could be done again.

But both were mindful of the opera’s controversial past.

“Klinghoffer” hadn’t been fully staged in America since it made its first appearances in New York and San Francisco in the early 1990s. Though some critics praised the opera, others accused it of favoring the Palestinians’ narrative, glorifying terrorism or countenancing anti-Semitism. Productions in Los Angeles and England were canceled because of the controversy.

After the premiere of “Klinghoffer,” composer John Adams decided to cut a particularly contentious scene, which coarsely depicted a suburban New Jersey Jewish family talking in their living room.

Still, apart from a handful of concerts and partial stagings, American opera companies steered clear of the work. The Boston Symphony Orchestra’s decision to cancel a scheduled concert version of the opera in the wake of 9/11 caused its own uproar, and earned the rebuke of Adams.

Determined to avoid the pitfalls of other productions, O’Leary decided to reach out to the city’s Jewish community. In spring 2010, more than a year before the opera’s opening, he asked for help from Batya Abramson-Goldstein, executive director of the Jewish Community Relations Council of St. Louis.

“I was not asked should this opera be put on,” Abramson-Goldstein said. “I was told the opera is being put on, [and was asked] ‘Are there ways we can work together?’”

“I don’t think that it’s appropriate for an arts organization to ask for permission to put on a piece of art,” she noted. Abramson-Goldstein had already helped found several interfaith dialogue groups in St. Louis and had recently played a role in the creation of the Michael and Barbara Newmark Institute for Human Relations, which is dedicated to promoting pluralism in St. Louis. She saw the opera’s arrival as an opportunity for further dialogue, and formed a steering committee of a dozen Muslims, Jews and Christians to prepare the community for the opera’s arrival. Together this team organized a set of community dialogues and educational materials about “Klinghoffer.”

A traditional artistic discussion of the opera was followed several days later by a symposium featuring O’Leary, Abramson-Goldstein, and local Muslim and Christian leaders. The speakers shared their responses to the opera, including its reminder of their common humanity and its ability to push them out of their comfort zones. The St. Louis Jewish Light, a Jewish newspaper, along with the local Jewish community center and the JCRC, invited O’Leary to a discussion aimed at the Jewish community. The interfaith committee also crafted a study guide about “Klinghoffer,” which the opera encouraged audience members to read.

Jews and Muslims, a Muslim-Jewish teen dialogue group affiliated with JCRC, was invited to attend and process the opera. I am an alumnus of the group, which is currently led by none other than my mother, Fawn Chapel. She told me that before the production, many students were concerned about the opera’s contents and whether the work would be biased or would glorify terrorism. But after viewing a dress rehearsal, the teens’ fears evaporated.

As a JAM alumnus, I was invited to view the opera and speak about it after a performance. Like many who have seen the opera, I found myself wondering what all the fuss was about, as the work I saw neither glorified terrorists nor disparaged Jews. True, I disliked the attempted symmetry the opera tried to coax out of the Jewish and Palestinian narratives. But I ultimately agreed with Abramson-Goldstein, who told me that she “might have changed the libretto a bit here and there if [Adams] had asked me. But what piece of art is perfect? It told a very difficult story.”

Even overlooking the libretto, I found the music and staging overwhelming. At times it even reinforced the focus of the opera on the horror of terrorism. The St. Louis production began with a bang and a cascade of water falling on an empty wheelchair; Robinson said this was a conscious effort to remind the audience that the opera is about the senseless murder of an innocent disabled man.

O’Leary said he personally replied to virtually every person who contacted him with concerns about the opera, sometimes by speaking to them directly. He found there was no substitute for actually seeing ”Klinghoffer.” “I think it’s accurate to say I didn’t receive any complaints from people who had actually attended the opera,” he said. There are some people, including opera critics, who have seen the performance and still think it is anti-Semitic or that it promotes terrorism.

That’s not to say everyone in St. Louis was happy with “Klinghoffer.” The most notable criticism of the opera’s 2011 run came from Karen Aroesty, regional director of the Anti-Defamation League, which has repeatedly condemned the opera and has a long association with the daughters of Leon and Marilyn Klinghoffer. Though Aroesty criticized the opera as ill-intentioned and full of falsehoods, she didn’t explicitly call for its cancellation.

St. Louis Rabbi Susan Talve (one of the Forward’s Most Inspiring Rabbis) didn’t want to see the work in 2011. “I could barely watch,” she said. “The author was showing the humanity in these people that did this despicable, unthinkable act.”

But Talve, who was involved in JCRC’s pluralism work, said she is glad she attended and discussed the work of art with fellow St. Louisans. “They’re missing an opportunity for dialogue [in New York],” she said. “If they won’t even talk about it there, they’re missing an opportunity to grow, to make connections with people that have different ideas. That’s what happened here.”

Those connections forged around a work of art came in handy only a few months later, after the last curtain lowered on “Klinghoffer.” A group of interfaith leaders, including Abramson-Goldstein, was planning a commemoration of the 10th anniversary of 9/11. A slew of speakers would be typical at such an event, but Abramson-Goldstein had other ideas. “Because of ‘Klinghoffer,’ a thought came to me: Let’s do it in music; let’s have a memorial in music,” she said. “I was able to call Tim O’Leary, and say: ‘Tim, I have a crazy idea. Do you think this could happen?’”

With O’Leary’s help, an interfaith concert was performed, with pieces by musicians of various religious backgrounds, including Jewish cantors; gospel choirs, and members of the Osage Nation, Mormon, Baha’i and Muslim ensembles. The event proved so popular that the organizers decided to make it annual. Each year, Christine Brewer, a renowned soprano, arranges her schedule to ensure she can sing at the event.

When I attended last year’s 9/11 concert at St. Louis’s Sheldon Concert Hall & Art Galleries I didn’t see any empty seats. At the finale, all the ensembles assembled onstage and joined the crowd in singing “God Bless America.” I can’t remember ever being more moved by a concert. In front of me stood a kaleidoscope of American religious diversity, Americans celebrating both their religious freedoms and their shared humanity. It occurred to me that such a scene sadly would be impossible to re-create in the halls of Damascus or Mosul; it embodies the sort of pluralism that terrorists, like those in “Klinghoffer,” seek to destroy.

When ‘Klinghoffer’ Played the Heartland