Neil Diamond’s 32nd Album Is His Best in 40 Years 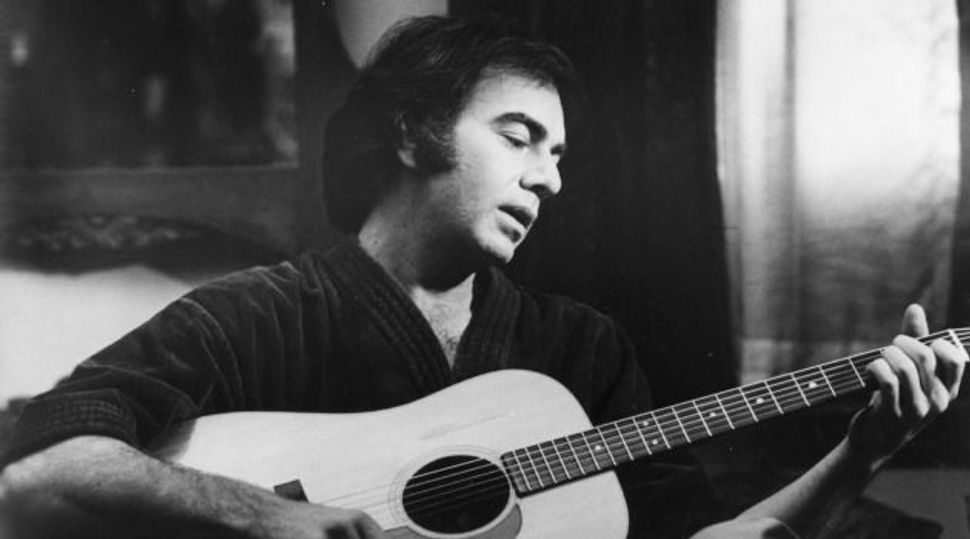 Sometime back in 1986, it finally dawned on me that Neil Diamond might actually be cool.

This wasn’t the easiest or most logical conclusion to come to, having spent so much of my elementary and high school years cowering amid the bombastic onslaught of “Longfellow Serenade,” “You Don’t Bring Me Flowers” (his wrist-slittingly maudlin divorce-rock duet with Barbra Streisand), “Love on the Rocks,” “Hello Again” and “America.” To a kid whose tastes ran towards the harder, heavier and more punk rock-oriented portions of the musical spectrum, this jumpsuit-clad gent with the schmaltz-soaked gravitas and finely-tuned commercial sensibilities — he scored a huge 1982 hit with “Heartlight,” a song cashing in on, er, inspired by the film E.T. — was clearly not to be trusted.

The Monkees changed my mind about that, however. Caught up in the mid-80s “Pre-Fab Four” revival spawned by MTV’s programming of old “Monkees” episodes, I discovered that Diamond had penned not only their massive 1966 smash “I’m a Believer,” but also the 1967 hit “A Little Bit Me, A Little Bit You” and the fine “More of the Monkees” album track “Look Out (Here Comes Tomorrow),” both of which impressed me with their garage-y three-chord snap, crackle and pop, and which inspired me to revisit Diamond’s own hits from the same era. “Cherry, Cherry,” “You Got to Me,” “Thank the Lord for the Night Time,” “Kentucky Woman” and the b-side “The Boat That I Row” (which became a UK hit for British singer Lulu) were all cut from the same three-chord cloth, and seemed almost proto-Ramones in their tuneful economy. “Shilo,” “Girl, You’ll Be a Woman Soon” and “Solitary Man” were more downbeat and featured slightly more complex arrangements, but their bruised melancholy resonated deeply with my angsty, on-the-verge-of-adulthood soul.

I wasn’t the only one tuning in to the early-Diamond wavelength in the 80s: British reggae band UB40 enjoyed a giant international hit with their cover of 1968’s “Red, Red Wine,” while underground bands like Midwestern noise-grinders Killdozer (“I Am, I Said”) and NYC retro girl group the Pussywillows (“The Boat That I Row”) were likewise digging into his 60s and early 70s song catalog. After graduating college in 1989, I co-founded a band in Chicago called Lava Sutra, and we proudly wore our early-Diamond influence on our tattered sleeves, even recording a cover of “Shilo” as an unlisted “bonus track” for our cassette-only first album. Our appreciation for Neil (as we called him) was mostly unironic — I say “mostly,” because his innate self-seriousness was so profound, there was no way to fully appreciate his work without poking fun at his more egregiously po-faced moments, like his “I need, I want, I weep, I ache” introduction to the “Hot August Night” version of “I Am, I Said,” or his written assertion in the album’s gatefold that “The stage, she is the God-damnedest woman you ever saw.” But he was clearly on his own trip, and we loved him for it.

Still, even while my bandmates and I developed a grudging appreciation for the likes of “Desiree” and “Forever in Blue Jeans” — the latter of which we once spun 11 times in a row in a passive-aggressive (but extremely effective) effort to clear our house of unwanted partiers — we always wished that Neil would get back to the stripped-down coolness of his early days, rather than releasing impenetrably slick adult-oriented fare like 1988’s “The Best Years of Our Lives” or 1991’s “Lovescape.” We weren’t alone, either: In 1989, hot producer Don Was approached Neil, telling him, “Neil, I think you’re a rock and roll artist, but you lost your way, and I know how to make it right.” Their initial collaboration, however, produced little in the way of results, rock and roll or otherwise. In 1994, Quentin Tarantino included Urge Overkill’s druggy version of “Girl, You’ll Be a Woman Soon” on the soundtrack to “Pulp Fiction,” but Neil still didn’t appear to take the hint; his follow-up to “Lovescape” (if you didn’t count two Christmas LPs and a Brill Building tribute album) wasn’t a return to his Bang Records days, but rather the country-tinged “Tennessee Moon.”

And really, why should Neil have cared what a bunch of hipsters thought of his musical direction? His concert tours routinely out-grossed every other performer on the planet, and his loyal audiences were more than happy to sit through (or hit the restrooms during) the part of his set that was devoted to his newest material, so long as he dutifully trotted out “Sweet Caroline,” “Song Sung Blue” and the rest of his classic sing-alongs during the course of the show. While he did eventually get back to his guitar-oriented roots on two stripped-down collaborations with über-producer Rick Rubin (2005’s “12 Songs” and 2008’s “Home Before Dark”), something felt disappointingly “off” about them — maybe Rubin was trying too hard to replicate the formula he’d honed with Johnny Cash, or maybe Neil’s heart just wasn’t in it.

The latter statement certainly cannot be said of “Melody Road,” the now-73 year-old performer’s 32nd studio album. Remarried in 2012, Neil has come up with eleven new songs (twelve, if you count the reprise of the title track) that positively brim with deep emotion and personal investment. Whether joyously celebrating his love on “Marry Me Now,” waxing seductive-yet-philosophical on “The Art of Love,” or brooding through his back pages on “Nothing But Heartache,” it’s clear that he means every word he delivers in his burnished baritone.

Even “Seongah and Jimmy,” a tale of a Brooklyn romance between a Korean girl and an American boy, is rescued from its cringe-inducing expositional lyrics (“She wants her masters/He helps her study”) by Neil’s obvious enthusiasm for the story — which, apparently, is based on his brother-in-law’s marriage. And in “Melody Road,” Neil has written perhaps his best song in decades, a thoughtful look back at a life in music that both sounds and reads like a long-lost cousin of “Glory Road,” a sweeping track from 1969’s “Brother Love’s Travelling Salvation Show.”

Musically, “Melody Road” does indeed harken back to an earlier time in his career — but it’s not the “cool Neil” of the 1960s, but rather the soft-rock idol who recorded such lush singer-songwriter albums as 1970’s “Tap Root Manuscript” and 1971’s “Stones.” Ironically, the album is co-produced by Don Was; the same man who wanted to help Neil regain touch with his inner rocker has instead (along with co-producer Jacknife Lee) wrapped his songs in tastefully grandiose arrangements that play to the singer’s flair for the dramatic without ever leaning too hard on the “Schmaltz” button. The resulting album is easily Diamond’s best (and best-sounding) record since 1974’s “Serenade,“ and demonstrates that Was has finally learned a lesson that the rest of us — all his fans and critics who wanted Diamond to be one thing or another at various times in his career — should have internalized ages ago: Ultimately, you just have to let Neil be Neil.

Dan Epstein is the author of “Stars and Strikes: Baseball and America in the Bicentennial Summer of ’76”. He writes frequently about arts for the Forward.

Neil Diamond’s 32nd Album Is His Best in 40 Years