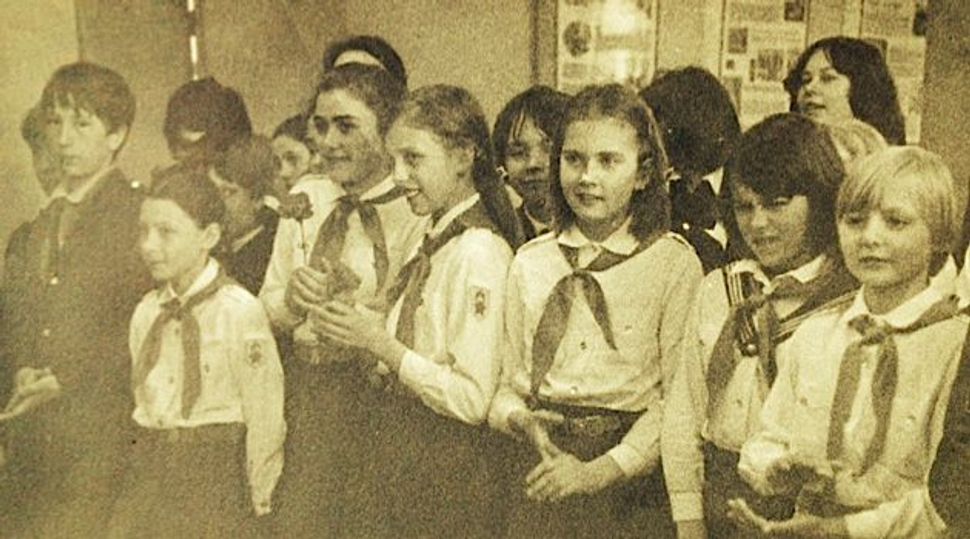 I’ve loved train travel ever since I was a small child. For the summer trips we made from Moscow to visit Tuapse, a town on the shore of the Black Sea where my grandparents lived, I shared a four-berth compartment with my parents. We would eat boiled eggs, tomatoes and cucumbers we had packed, discuss the latest gems of Soviet literature with neighbors and drink tea that came in the iconic railway teacup — a glass nestled in a carved metal holder — and was always brewed fresh by the conductor. Not even the bathrooms, which smelled worse than a Russian village outhouse, could shrivel my enthusiasm.

So when we learned that our immigration journey to the United States in the fall of 1989 would include an overnight train to Rome from Vienna, I was ecstatic. I pictured the comforts of Soviet trains adjusted for a Western reality of well-stocked stores and beautiful people. I imagined we would travel in the luxury of velvet-upholstered berths, clean toilets complete with baths, and tea in fine china with cups and saucers.

We flew into the Austrian capital, where the representatives of the Hebrew Immigrant Aid Society and the Jewish Agency for Israel met us. At the airport we declared our wish to continue on to the United States. Three weeks of processing later, we joined other Soviet émigrés at Vienna’s train station for the transfer to Rome, where the U.S. Immigration and Naturalization Service conducted interviews for Soviet refugees.

We arrived to discover that our train didn’t have any berths. Nor did it have clean linen, conductors with tea-making facilities or bathrooms that differed greatly from those of their Soviet counterparts. Instead, each compartment had six seats, a glass wall next to the hallway and a small overhead luggage rack. At first we thought this was a mistake — surely the HIAS didn’t expect us to spend all night sitting upright. How could we fit the six giant suitcases that contained our lives onto a luggage rack that seemed to be designed for briefcases? And finally, the horror: What about our tea? 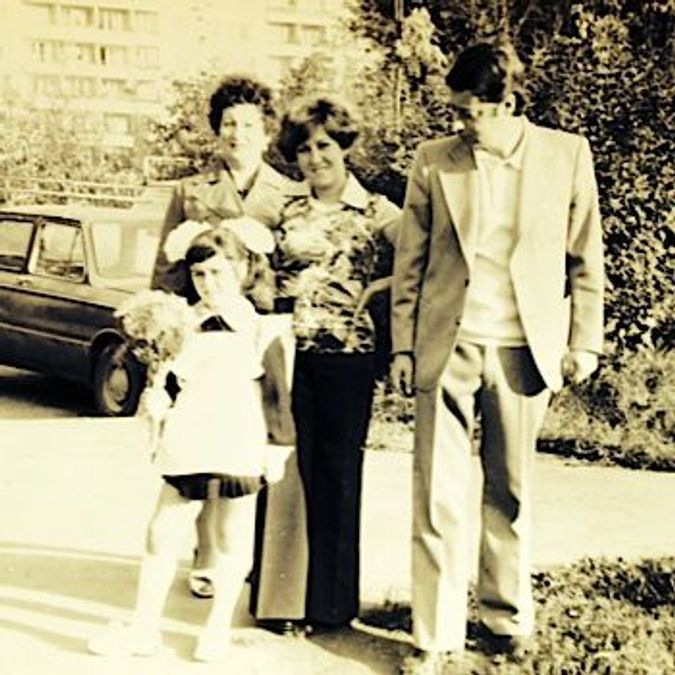 Flowers for the Teacher: The author, her grandmother and parents on her first day of school in 1976. Image by Courtesy of Margarita Gokun Silver

My parents and I wedged our suitcases between the seats, which meant that we spent the night with our legs on top of the luggage. Since sleep was impossible, my father used the time to share his doubts about our decision to leave the USSR. He’d been doing it on a regular basis ever since he determined a few days into our trip that living outside the Soviet Union felt nearly as degrading as living inside it.

We left the Soviet Union because of anti-Semitism. The centuries-old Russian tradition of dehumanizing and harassing Jews was as resilient as the cockroaches in our small Moscow apartment — not only surviving the Revolution, World War II and Stalin’s gulags, but also emerging after each one of them, stronger than before. When the 1980s politics of glasnost, or openness, gave way to uncensored anti-Semitic vitriol, I decided we’d had enough. Hiding in our darkened apartment on nights when pogroms were announced wasn’t my definition of a good life. I began lobbying my parents to join the second wave of Jewish immigration to the United States, facilitated by HIAS.

At first they ignored me. I was 18 years old and, according to my father, not old enough to have an opinion on a subject as gargantuan as moving to a new country. My parents were working as engineers and had a comfortable, Soviet middle-class life even though they knew that their careers would never progress because of Jewish quotas. Emigrating would mean embarking on a complete revamp of their lives at the time when they were beginning to look forward to retirement.

Yet my grandparents supported me. Between narrowly escaping forced labor under Stalin’s rule, being called ”kikes” at a bus stops and being denied employment because of their Judaism, they were concerned for the future of their only grandchild. It took the three of us a year to convince my parents to emigrate.

Soviet press reports about large numbers of departing Jews boosted the anti-Semitic hatred. Newspapers called us rats. People looked at us as if we had put a torch to the Motherland, then flooded it and now had the nerve to leave the mess behind — especially since they believed we were leaving for someplace better than a country where old newspaper had replaced toilet paper years ago.

We believed that, too. Once we landed in the West, we thought, everything would change. We would refrain from hoarding consumables, lose the trademark fear of a Soviet Jewish citizen and regain some dignity. Otherwise, why leave behind the only reality we’d ever known?

Yet so far things weren’t working that way. In the past three weeks, we had to adjust our definition of self-worth several times. First, at the Vienna airport, we had to wait for a van sitting on a curb behind a building under the cold October drizzle for five hours, far away from regular passengers. When we arrived at our hostel, we learned that we would share a dorm-style room with another family. And then we found ourselves packed into our train compartment like rolls of smoked sausage in an émigré suitcase.

It didn’t help that Austrian police with machine guns boarded with us in Vienna and were replaced by carabinieri, Italy’s military police, at the border. It wasn’t exactly clear if they were there to protect us or to make sure no disgruntled émigré jumped off at an intermediate stop.

The next morning, as we approached a station outside Rome, the guards told us that it was time to get off. The stop would last two minutes. Like everyone on that train over the age of 10, I’d once been a red-tie-wearing Soviet pioneer. As a member of the state-run youth organization, I had scouted metal scraps for recycling competitions, fought the Nazis in battle re-enactments and guarded Lenin’s bust in somber silence each year on April 22, his birthday. This youthful enthusiasm soon dissipated into indifference and malaise of the system characteristic of most Soviet teens.

But then came the moment when 100 émigrés had to disembark in two minutes. Our inner Pioneers rejoiced at the chance, and we evacuated that train as if it had just been bombed. We passed small children through windows, carried out older people who could no longer walk and flung the luggage onto the platform. Grandfather Lenin would have been proud.

As we organized our bruised luggage on the platform, a short man in tall leather boots and a long black leather coat marched toward us and began to yell. We stopped and stared. Perhaps his attire was the height of fashion at that time, but we had just spent a night on a train with armed guards, evacuated this train in less than two minutes and were now getting shouted at by a man in black leather. The only fact keeping this situation from being a flashback to the Holocaust stories that even the youngest among us had heard from our grandparents was that he screamed in Italian.

My father turned to my mother and whispered, in Russian, “What the hell does he want?” She shrugged and mouthed back, “I don’t know.” The man continued to pace the platform, his voice louder each time he caught one of us staring at him. He pointed to the luggage. He threw his hands in the air. He shook his head. He approached some clusters of people and shouted directly at them.

The man stopped. He looked around our group and, as if just realizing we were not Italian, asked, “Qualcuno parla italiano qui [Does anyone speak Italian here]?”

I felt a nudge at my back.

“Go and help,” my mother said.

“Who? Me?” I had taken three months of Italian classes, but being very shy, there was no way I was going to volunteer my services.

“Come on,” my mother said. “Do you really want to be stuck here on the platform for the rest of the day?”

She had a point. The lack of sleep was catching up with me. I thought of a bed and possibly breakfast, and stepped forward.

“Parlo un po’ di italiano [I speak some Italian],” I said quietly. My little bit of Italian was quickly disappearing into efforts to control my shaking knees.

The man looked at me, put his hands together as if in prayer and mumbled something. Then he smiled.

“Can you please tell everyone,” he said, in loud and slow Italian, “to assemble in one straight line?”

I translated. My mother glowed. And my father looked like he’d just heard his daughter expand on the theory of relativity at a physics congress.

“Behind there,” the man pointed, “are several buses waiting to take people to their hostels. Please tell them we have enough space for everyone, so there is no need to worry.”

After everyone from our group had boarded, the man turned to me, bowed, said “Grazie molto [Thanks very much],” and shook my hand. I replied with “Prego [You are welcome],” and climbed onto the bus to join my parents. There I was greeted with a round of applause from 30 or so émigrés, a “Molodets [Good job]” from my mother and a conservative pat on the back from my father. This moving across the world idea was definitely looking better. If people in the West were going to treat me with respect, I could put up with their subpar trains.

Margarita Gokun Silver is a writer and an artist living in Madrid, Spain. Follow her on Twitter @StoriesColors