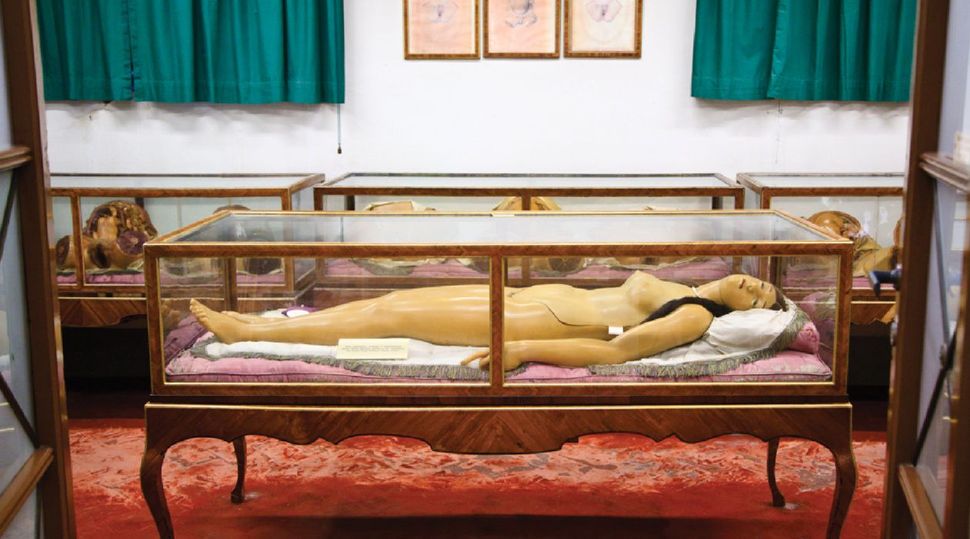 Brooches and wreaths made of carefully coiled human hair. Images of life-size, ultra-realistic models of dead, naked women — their supine bodies arranged in what look like post-coital poses, but with their abdomens sliced open and organs spilling out. Death masks hundreds of years old that look like people standing next to you. This is just a taste of what’s on view at the new Morbid Anatomy Museum in the Gowanus section of Brooklyn. Behind it is a Jewish woman, Joanna Ebenstein, who says that a surprising number of those interested in the morbid and macabre material are also Jewish.

The death-centric museum, which opened in June, was born out of Ebenstein’s passion project. She had collected more than 2,000 books and 5,000 objects into the Morbid Anatomy Library, parts of which were on view for several years at the nearby Proteus Gowanus gallery. With the opening of the museum she can offer so much more.

Highlights among innumerable lectures and classes offered are those on taxidermy. The taxidermy classes — one devoted to squirrels, another to wearable birds — are frequent. And demand is high: A mouse taxidermy class (your choice of a one or two-headed rodent!) sold out quickly.

Ebenstein co-curated the museum’s opening exhibit, “The Art of Mourning,” with Evan Michelson, an antiques collector, co-owner of Obscura Antiques & Oddities store in the East Village, and the museum’s scholar-in-residence.

“I’ve found over the years that it is overwhelmingly Jewish women who are fascinated with this stuff,” said Michelson. “When someone says ‘I’m obsessed with hairwork,’ it usually turns out that they’re Jewish.” Hairwork, Michelson’s specialty as a collector, was popular in the Victorian era for use both in memorial testaments to dead loved ones and for tokens of affection exchanged between lovers.

Few specifically Jewish artifacts are created around death, say Michelson and Ebenstein, since Christianity places greater emphasis on the value of physical relics. The single overtly Jewish item out of the more than 90 on display in “The Art of Mourning” is a death certificate practically ketubah-like in its colorful artwork. The ornate lithograph depicts a man and a woman sobbing graveside and a memorial eternal light standing before the space where the name of the deceased would be filled in.

The museum has proved popular. Well over 5,000 people have visited, including 1,000 during the recent Gowanus Open Studios tour. “The reception has been crazy. People are very, very passionate about it,” said Ebenstein.

In the 19th century three of five children died before reaching adulthood. “There was a lot more daily loss,” said Ebenstein, which is reflected in what’s on display at the museum. Items include post-mortem portraits of children on paper and brooches; hand-painted “spirit photographs” on silk embroidered with forget-me-not flowers, and the Paris death mask of a woman said to have been fished from the Seine in the 1880s. At the time, the Paris morgue displayed bodies as a tourist attraction, Ebenstein said.

Her fascination with the icky and creepy was evident as a child, when she wasn’t at all squeamish about snakes and spiders encountered at her grandparents’ lake house.

Her proclivity was encouraged by her grandfather, a Holocaust survivor and doctor who “nurtured connections to things that seemed real and true.” Ebenstein’s father gave her a two-headed taxidermied duckling as a birthday gift.

Like Michelson, Ebenstein was raised in an atheist family. Today, both identify as culturally Jewish, and neither is religious. The heavily Jewish interest in the field is no accident, both said.

“A lot of Americans don’t want to feel deep, painful feelings,” said Ebenstein. “The idea of death is that the world as we know it could end at any moment. Jews aren’t able to keep that distant from their minds because the world did end” — with the Holocaust. “This idea that the sun will rise and everything will be okay, this American denial of death, is a luxury, and Jews have never had that luxury,” she said.

Michelson, who is also a “post-punk industrial goth” musician, was working as a jewelry restorer when she first encountered hair art in about 1990. “I fell instantly under its spell. There is something viscerally poignant about it. Hair is something that absolutely disgusts people. It hits on a very visceral level as dead protein. It’s very evocative — a relic — when it’s disembodied.”

“There is something about this hairwork that is vaguely perverse. It is singularly funereal. It’s part relic, part specimen, part jewelry, part craft,” she said. Among “East Coast liberal Jews this wasn’t done, it wasn’t something we encountered,” said Michelson. “When I first found it in my early 20s, it was entirely exotic. Part of my fascination with it is that it’s deeply strange.”

“I’ve been buying and selling these things for more than 20 years and have spoken to many Jewish women, definitely more than just by chance, who are fascinated with this very thing,” Michelson said.

Like Ebenstein, Michelson isn’t easily spooked. “Things of this nature do not make me recoil. When it comes to scientific medical preparations I have not come across one that I have been repulsed by,” she said.

On the contrary, Michelson added, “I’m not fond of Precious Moments [figurines]. Honestly they make me feel cold and alienated.”

Debra Nussbaum Cohen is a frequent contributor to the Forward.