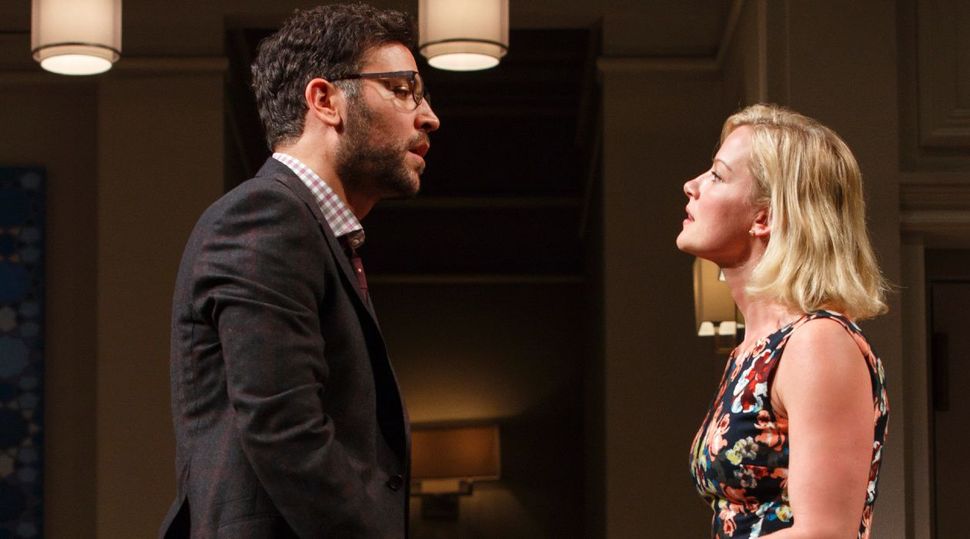 Amir Kapoor is a guy you know, maybe went to college with. His parents were born in India — or was it Pakistan? — and he grew up in a devout Muslim-American family. He went to college, then to law school; along the way he abandoned his faith, and now he’s a corporate lawyer at a Jewish firm, with a blonde wife and perfectly tailored clothes, sipping scotch in his immaculate Upper East Side apartment. It’s the same story as for an Aaron Kaplan, say, except that Kaplan would have lived his version a generation or two earlier and at a white-shoe, WASPy firm.

And Amir Kapoor is hosting a dinner party that has gone off the rails.

“Disgraced,” Ayad Akhtar’s excellent and bracing play centered on Amir, which won the 2013 Pulitzer Prize, is now playing on Broadway at the Lyceum Theatre. It places Amir; his wife Emily, an artist; his coworker Jory, a black woman at his prestigious firm; and Jory’s husband Isaac, a Jewish curator at the Whitney, at dinner with a fennel salad (the pork tenderloin, an indicator of everyone’s assimilation, is never served), too much to drink, and simmering tensions. They explode, of course, in a fascinating, compelling, and occasionally frightening examination of cultures colliding in the post-9/11 world and the vestigial, perhaps unavoidable, and sometimes horrifying, atavistic tugs that can be buried within any of us.

In the climactic scene of the taut, 85-minute one-act play, Amir (Hari Dhillon, who becomes more assured in the part as his character becomes more animated) comes home to an empty apartment, pours himself a drink, and smashes his glass in frustration. He has had a bad day at work — he’s on the verge of making partner, but suddenly his patrons are turning on him. When Emily (Gretchen Mol) returns, she reminds him that Jory (Karen Pittman, the only holdover from the previous New York production, in 2012 at Lincoln Center) and Isaac (Josh Radnor) are coming for dinner, Isaac bearing news about whether her paintings will be included in a major show he’s putting together.

Emily is an Islamophile; her work is in the Islamic tradition and she speaks paeans to the “beauty and wisdom” of that culture. (If Amir’s acquisition of a shikse wife can be read as his assertion of a place in upper-middle-class America, Emily’s acquisition of a subcontinental husband could well be the ultimate expression of her Orientalism.) Amir is a proud unbeliever, and Isaac’s selection of her pieces begins Amir’s disquisition on the evils of Islam. (We’ve had some of this in earlier scenes.) As he gets worked up, and as drinks flow, the conversation escalates. The well-meaning progressives in the group are reluctant join in Amir’s blanket condemnation of his erstwhile religion, which make him expound further on what he sees as its flaws, from the prophet’s belief, per the Quran, that “angels don’t enter a house where there are pictures and/or dogs” to the instructions that apostates be punished with death and that a man should beat a disobeying wife.

“Islam comes from the desert,” he says. “From a group of tough-minded, tough-living people who saw life as something hard and relentless. Something to be suffered.” And he speaks admiringly of the other desert-based tradition. “Jews reacted to the situation differently,” he continues. “They turned it over, and over, and over. I mean look at the Talmud. They’re looking at things from a hundred different angles, trying to negotiate with it, make it easier, more livable… It’s not what Muslims do. Muslims don’t think about it. They submit.”

But as he’s further agitated, and further drunk, he also admits that he cannot escape his strict Muslim upbringing. “Even if you’re one of those lapsed Muslims sipping your after-dinner scotch alongside your beautiful white American wife and watching the news and seeing folks in the Middle East dying for values you were taught were purer, and stricter, and truer,” he says, “you can’t help but feel just a little a bit of pride.” As he did, he confesses, on September 11. Horrified, he says, but a little bit proud.

This is when everything goes really wrong, but also when the play becomes most fascinating. It’s an indictment of fundamentalism, of course, and of ethnic triumphalism, but sitting in the audience you can’t help wondering to what extent similar impulses reside in you. “You’re going to tell me you’ve never felt anything like that,” Amir asks Isaac, “an unexpected blush of pride, say, when you hear about Israel throwing its military weight around?” Isaac is quick to say that he’s a critic of Israeli policy — but, still, don’t many of us experience what Amir describes at least some of the time?

What proceeds from this point is tense and sometimes shocking, and I won’t spoil the play’s surprises. But I’ll note that director Kimberly Senior, who staged the two previous U.S. productions of “Disgraced,” has here mastered Ayad’s material. At Lincoln Center, the play was deeply compelling, but the escalation of the dinner party felt unnatural, somewhat histrionic. I didn’t believe that the most shocking moments came naturally to these characters. At the Lyceum, I was sold. Every moment seemed true, each affront terrifyingly inevitable.

Amir says things, and does things, that Aaron Kaplan wouldn’t. But as much as Ayad’s terrific play is a scarily heightened portrait of the challenges of being an upwardly mobile Muslim-American in our current world, it also raises powerful questions for anyone who could be accused of having a dual loyalty.