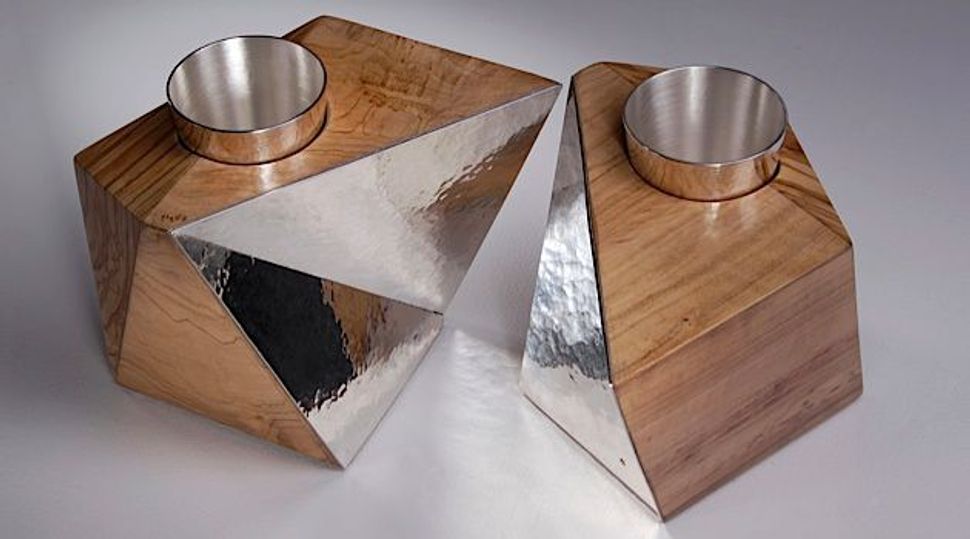 Calling all Cassandras, those given to gloom and doom about the pliancy of contemporary Jewish life, much less its future. I suggest they make a beeline for Chicago’s Spertus Institute for Jewish Learning and Leadership’s new exhibition, “Amy Reichert: Reinventing Judaica,” whose display of Jewish ritual objects will go a very long way toward dispelling any sad-sack thoughts the Jewish community’s naysayers might harbor.

The exhibition features the artistry of Amy Reichert, a Chicago architect and exhibition designer who recently trained her sights and her skills on the making of Judaica. Lest you’re inclined to yawn at the thought of yet another in a long line of dutiful and often dreary museum exhibitions about Jewish ritual objects, I urge you to resist. Better yet, banish all thoughts of the ho-hum and the predictable, the twee and the mannered. Reichert’s assembly of Jewish ritual objects is unlike any you’ve ever seen before. It delights the eye and teases the imagination.

Drawing on wood and hammered silver, on the spare aesthetic of the bento box and a keen sense of scale, the Kiddush cups, challah boards and Seder plates on view, among other things, are smart in every sense of the word: good-looking, beautifully proportioned and inspired by an intelligence that is at once visual and literary, personal and collective.

What renders Reichert’s efforts distinctive is that they are powered as much by text as by self-expression. In fashioning a Jewish ritual object, the artist told me recently in a lengthy phone conversation, she “excavates the text.” By “text,” Reichert means the corpus of biblical and talmudic stories, as well as the body of rules and regulations, that relate to the making of Jewish things. Many of us, I suspect, would chafe under those restrictions, but Reichert finds them freeing. Tellingly, she prefers to think of them as “visual cues,” rather than as obstacles. They guide the artist’s hand, enabling her to create a “visual version of learning the text.”

I do not mean to leave the impression that Reichert’s work is heavy handed and didactic, likely to be apprehended only with a shulkhn arukh in tow. Far from it. You can relish her buoyant version of a sukkah, whose translucent walls are composed of linen, or her exuberant, witty rendition of a Miriam’s cup, adorned with a dangling cluster of freshwater pearls reminiscent of earrings, without knowing word one about their respective backstories or halachic stipulations. They stand on their own, floating free of their textual supports. But should you be given the opportunity to probe the artist’s motivations and intentions, to learn in detail how her work is informed, even shaped, by these age-old notions, your appreciation for the object — and its creator — only grows deeper and more layered still.

Spertus has made a point of characterizing Reichert’s body of work as a reinvention of Judaica. The term comes in handy — I’ve used it myself on more than one occasion — but I question whether it does justice to the complexity of Reichert’s thought processes, which take into account the scale of the gesture, its touch and heft, as well as its relationship to tradition. Determined “to pack as much meaning as possible into an object,” she doesn’t so much reinvent as reinterpret, or, as Reichert prefers to think of it, to “re-look.”

But no matter. Whatever its name, I hope this exhibition brings lots of visitors to Spertus’s doors and droves of potential clients to Reichert’s studio. On the strength of Reichert’s artistry and its steadily growing appeal, one has to wonder whether the community’s Cassandras might have been looking in the wrong places and speaking to the wrong people when they drew their conclusions about American Jewry’s murky future. At Spertus, it shines brightly, as luminous as one of Reichert’s Kiddush cups.