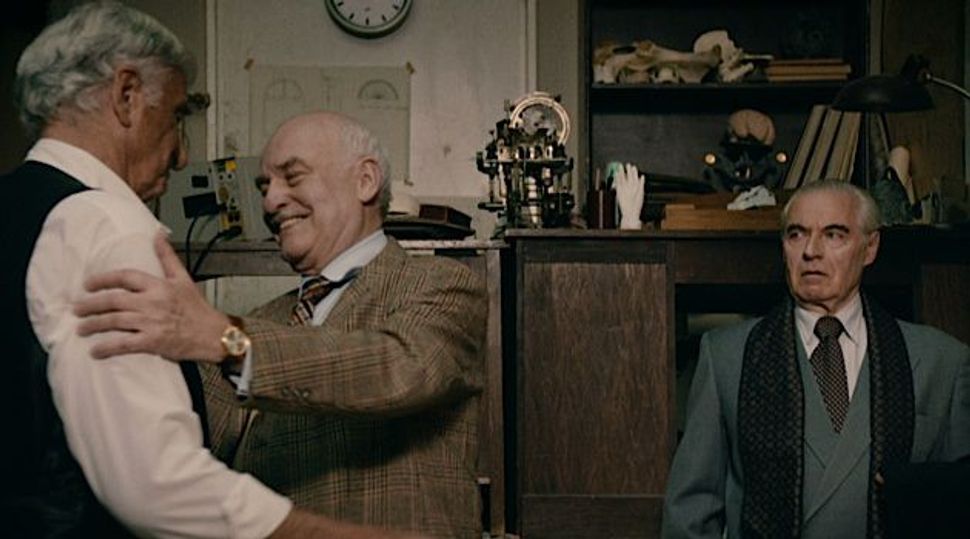 A Peculiar Friendship: In “As From Afar,” Wiesenthal and Speer come to an agreement about how to interpret the past. Image by Jewish Museum New York 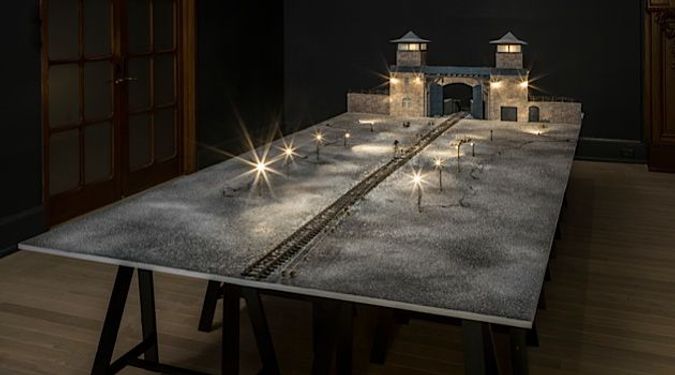 After and Before: Dani Gal’s installation features a film about Simon Wiesenthal and Albert Speer — and a model of the gates of the Mauthausen concentration camp, where Wiesenthal was imprisoned. Image by Jewish Museum New York

Dani Gal is of the generation of Israeli artists who, instead of creating their national myths, grew up with them, lived under their spell, and watched as the myths grew into monoliths meant to define a people’s sense of themselves. His work is infused with a discomfort over the causal inevitability between the Holocaust and his country’s reason for being. To him, history contains so many ironies and contradictions that it must be manipulated and falsified in order to serve personal and national ideologies. By deconstructing the processes by which this manipulation occurs, Gal seeks to restore some semblance of integrity to the past, to return it to the realm of the human and strip it of its propagandistic purposes. Incidentally or not, his work churns up hard questions about the project of Zionism and how it’s been sustained over the years.

His previous film, “Nacht und Nebel” (“Night and Fog”), commissioned for the 2011 Venice Biennale and shown at the New Museum in 2012, depicted the disposal of Adolf Eichmann’s cremated ashes off the coast of Israel in such a way as to blur the distinction, procedurally and emotionally, between the actions of the Israeli military police charged with carrying out this mission and the mechanized slaughter that occurred at Auschwitz.

His new installation “As from Afar,” on view at the Jewish Museum, concerns the surprising late-life friendship that blossomed between Nazi hunter Simon Wiesenthal and Albert Speer, the man responsible for so much Nazi architecture. It consists of two parts, mounted in two rooms: first, a dimly lit scale model of the gates of the Mauthausen concentration camp, complete with watch towers, moody gaslights, and railroad tracks and, if you look closely, a film camera mounted on rollers that follows its own divergent track; then, in the second room, a video that purports to dramatize Wiesenthal and Speer’s friendship. 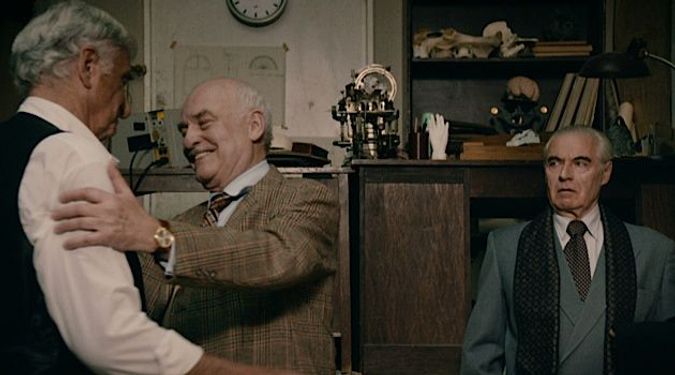 A Peculiar Friendship: In “As From Afar,” Wiesenthal and Speer come to an agreement about how to interpret the past. Image by Jewish Museum New York

All of this is contextualized further by the presence in the film of Herr Kuck, the survivor and model-maker responsible for the creation of the display mounted in the front room. In the lingering first shot of the film, Herr Kuck gazes at the camera, his face half curled toward a smile, half slack with the exhaustion of age and sorrow. He stands in front of a green-grey backdrop that’s been lit to accentuate his melancholic dignity, reminding the viewer of the interviews in “Shoah” or Steven Spielberg’s Yad Vashem testimonies.

But Kuck doesn’t speak. He remains still, unmoving, unknowable except through the associations the viewer brings to experience of seeing an old Jewish man posed in just this way. But holding still seems difficult for him. His mouth twitches like he wants to laugh and is having trouble holding it in. Over this, a stately voice-over intones the words of Ludwig Wittgenstein, “Consider this example: What is the difference between a memory image, an image that comes with an expectation, and say, an images that comes with a dream?”

Cut to Kuck’s studio. Speer and Wiesenthal stand over the model we saw in the other room discussing all the ways it distorts the truth and, crucially, the train tracks that they both claim didn’t exist. “I built it from memory,” Kuck says. “Americans. They want railway tracks. They say otherwise it won’t look like a concentration camp.”

“As from Afar” operates on the viewer through the gradual accretion of layers. On one level, contradictory ideas about the way history, memory and meaning intersect and dance around each other like old friends who don’t completely trust each other. On another, we witness how history and memory can be manipulated to convey a predetermined meaning.

As Robert Schumann’s ethereal piano composition “Wie aus der Ferne” (“As From Afar”) plays again and again in the background, the film weaves the real and the invented together, using Wiesenthal and Speer’s own letters to each other to generate scenes of dialogue, situating the two old men in a quaint German town that looks like it’s made out of gingerbread, but is actually, as the camera shows us, a stage set constructed of plywood and corrugated steel. They wander the streets, discussing whether or not Hitler had syphilis, and how this might have affected his decision to kill the Jews. They discuss how impressed Wiesenthal is by Speer’s willingness to admit and atone for his crimes. They stop for tea and discuss the books they’re writing and their shared frustrations with the receptions their books have received. They do not discuss the newspaper clipping Wiesenthal has tucked into his breast pocket that proclaims “Mauthausen was Speer’s idea.” When the bill comes, Wiesenthal insists on paying for Speer’s drink. They’ve come to an agreement about how to interpret the past. Wiesenthal will be the one to define its meaning.

Schumann’s song plays again, one last time, as the two men get lost in the empty rooms of the sterile modernist house Wittgenstein designed and had built for his sister — the actual house, lodged inside the fake town. The voice-over returns:

“Can I discover something? The essential feeling of pastness which remains after extracting all those experiences which we might call the experiences expressing the feeling. I’m inclined to express to you to put the expression of our experience instead of the experience. You might say these two aren’t the same. This is certainly true, at least in the sense that it is true to say that a railway train and a railway accident are not the same thing.”

The real Wittgenstein house is replaced by a scale model. It too has been built by Herr Kuck, the man who previously built the Mauthausen camp model from memory. He’s alone in his studio. The song has just come to an end. After placing a solitary tree next to the house, he wanders back up the steps to his gramophone player, takes the record from the turntable and replaces it in its sleeve. The viewer is left to wonder if all of this — the conversations between Speer and Wiesenthal, their friendship, the uses they put each other to and the uses history has made of them — was just a trick of memory conjured from the mind of an old survivor. As Wittgenstein said at the beginning, “What is the difference between a memory image, an image that comes with an expectation, and say, an images that comes with a dream?”

History, Gal implies, is a joke played on the past. All we have is memory, and that lies too. It’s important to take note of who’s doing the lying, and why, and how.

Add another twist to the story. Herr Kuck is named after and dressed to look like a character from “The Magic Door,” a popular Israeli children’s show from the 1970s. He’s a fictional character who’s imagined a fictional reality based on his distorted memory of the past, a dream reality, built from the logic of his emotional needs. The memory of the Nazi hunter and the Nazi being co-equals isn’t just something an old Jew might dream up. It’s the dream of an entire nation. But is it a railway train or is it a railway accident? That question goes unanswered.

“As From Afar” will be on view at the Jewish Museum through February 1, 2015.