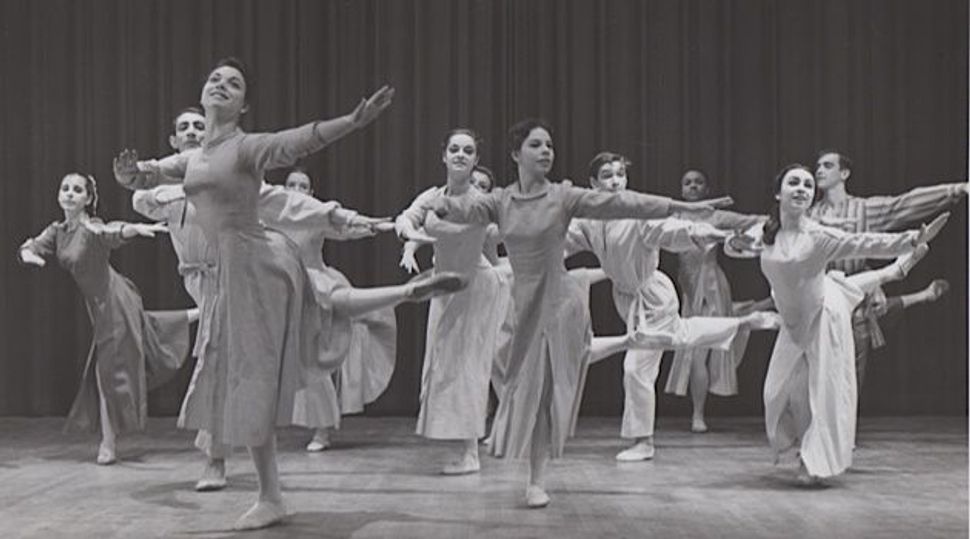 Brooklyn Ballerina: Leida Snow (foreground) in a production of the Brooklyn Ballet Company in 1965. Image by courtesy of leida snow 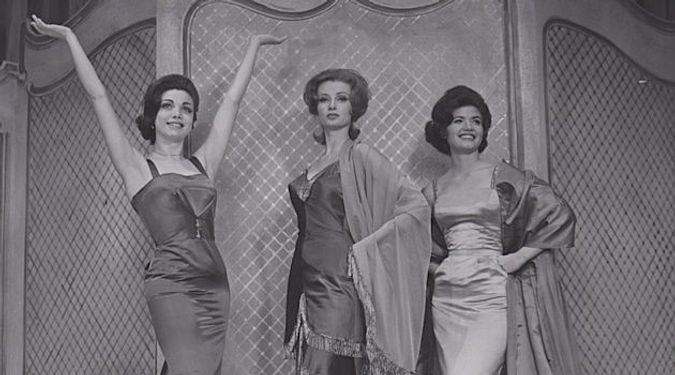 Put Your Hands Up For Broadway: Leida Snow (left) in ‘I Can Get It For You Wholesale,’ which toured several American cities beginning in December 1962. Image by courtesy of leida snow

When “Fiddler on the Roof” opened on Broadway in the fall of 1964, I was singing in the chorus in “Ben Franklin In Paris,” another Broadway show, which starred Robert Preston. I also performed in the ballroom scene whenever one of the dancers wasn’t feeling well, because I was the only singer who could also dance.

When I heard that the producers of “Fiddler” (which eventually ran for a then record-setting 3,242 performances) were looking for replacements for departing performers and understudies, who go on if someone is ill, I wanted to try my luck. I was a 24-year-old think-I-know-it-all New Yorker who was burning to break out of the chorus. As I had no agent to represent me, I knocked on the stage door.

“Will you be holding auditions soon for Tevye’s daughters?” I asked the man who came to the door. He didn’t look like he had the patience for me. “Wait here,” he said. He returned with “sides,” several pages of the scene I would read, scribbled a date and time, and shoved the pages to me. This was good news because it meant that I would get to audition as an individual, and it wouldn’t be a “cattle call,” as we called the chorus auditions.

Auditions are different from performances. They’re like snapshots rather than portraits, so performers have to learn how to condense everything into a couple of minutes to make a lasting impression — which is why I signed up for an audition study class run by major casting director Michael Shurtleff. He would later write “Audition,” a widely read guide book on the audition process, and was the person to work with, known for his tough analysis and criticism.

I waited impatiently until I was called on to present my scene, in which Hodel, Tevye’s second-oldest, 17-year-old daughter, sings “Far From the Home I Love.” In the song, Hodel explains to her traditional father that she must leave home to be with the man she loves.

Shurtleff was usually so miserly with praise that, even though I thought I had done my best, his response startled me: “Yes. Much better than what’s on Broadway.” 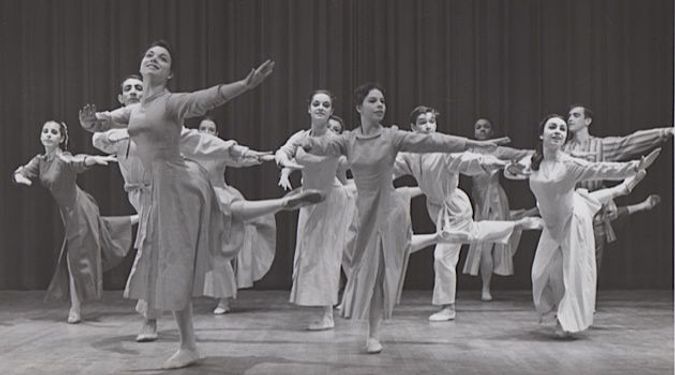 Brooklyn Ballerina: Leida Snow (foreground) in a production of the Brooklyn Ballet Company in 1965. Image by courtesy of leida snow

Little did I know that being “better than what’s on Broadway” had very little to do with getting the job. There is a gap between being talented and being hired, because there are simply so many talented people. I had heard Stephen Sondheim say that everyone who auditions for him is at a certain level. Impressing him, he said, was all about a look, a quality that had nothing to do with ability.

Another Broadway composer also told me that talent was irrelevant: “Imagine the legendary Richard Rodgers is choosing from a stage full of girls. He points to a fresh-faced blonde Midwesterner way in the back. She smiles sweetly and asks: ‘Who me, Mr. Rodgers?’” He told me, the Jewish brunette from New York: “You are not a ‘Who Me, Mr. Rodgers type,’” meaning that I was not a perky WASP. At the time, I didn’t believe either of them. “Of course,” I thought, “It helps to look right for a role, but if you’re talented enough, surely you can be cast, even against type.”

Anyway, even if I wasn’t a “Who Me, Mr. Rodgers” type, here was “Fiddler,” perfect for me: Growing up, I was always proud of my Jewish Russian heritage. I had learned the Russian lullaby my grandmother sang, loved hearing Russian spoken at ballet class, studied the Russian language, and read Dostoevsky and Lermontov. Furthermore, each of Tevye’s daughters makes a break with her father’s ideas — and I had done that, too, choosing a life in the arts rather than a practical career.

I had grown up in Queens, loving Broadway shows. My mother started taking me to them when I was a toddler in the 1940s. She said a Broadway ticket then was cheaper than a baby sitter.

“What would you have done if I’d started to howl?” I asked.

“I would have taken you out, of course,” she replied. “But you never did.”

She told me a man came up to her, offering $100 for each of our tickets to see Ingrid Bergman in “Joan of Lorraine,” a sold-out play. “She won’t remember anything about the show,” he said, pointing to me.

“She’ll know she was here,” was how my mother ended the conversation.

I later became a professional dancer, and only discovered that I could sing by accident — literally. One summer, I was part of a production of “Brigadoon,” which was done “in the round,” meaning the stage was surrounded by audience seats with aisles between the sections. During one performance, my dance partner lifted and swung me around as usual but, dizzy after the lift, guided me into the wrong aisle, and we crashed into furniture which was being rushed to the stage for the next scene. The doctor said voice lessons would help heal my bruised ribs, and, much to my surprise, I discovered I could sing.

The day of the audition for “Fiddler,” I walked down West 44th Street with confidence, heading to the Majestic Theater, where “Fiddler” had moved from the Imperial in 1967. While I waited, I drank in deep breaths of the beloved backstage air, a mix of stale cigarettes and sweat. When it was my turn, the realization hit that my performance would be judged by a handful of theater professionals — the casting director, choreographer, director, maybe a producer — who had already seen and heard many hopefuls and would be auditioning more after me.

Even though I had been told before that talent wasn’t what mattered in the end, it only occurred to me then that the judges of my performance assumed we would all be good, and that they were looking for a look, a quality that had nothing to do with my ability. But I was confident: After all, the role in “Fiddler” was perfect for me. It surely would be my “Who Me, Mr. Rodgers” moment.

I walked out and stopped stage center. I was about to begin when, from the small group out front, a woman’s voice came loud, clear and final: “Thank you.” That was it. Whatever they were looking for, it wasn’t me. I was the wrong type. I was being typed out!

Wait a minute! I knew that when you heard those dreaded words you were supposed to quickly leave the stage. Instead I said: “Please. Let me read for you.” Damn it, I thought. Give me a chance.

“No. Thank you.” This time, the voice sounded annoyed.

I staggered home, tears streaming down my face. That witch, I thought. If only I could have read. I could do it better than what was on Broadway. Michael Shurtleff had said so. Where could I fit in? Not WASPy enough for the “Who Me, Mr. Rodgers” roles, and not ethnic enough for the Jewish ones. It wasn’t fair. 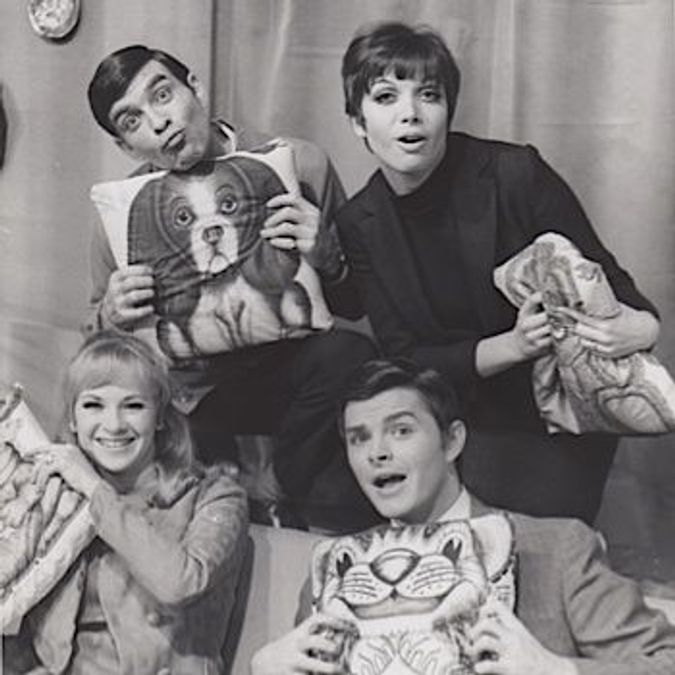 Funny Faces: Snow (standing, right) in ‘Under the Yum Yum Tree,’ in Greensboro, North Carolina, in 1968. Image by courtesy of leida snow

I was devastated. The next few years saw me scarfing down self-help books, searching for answers. But I was never going to turn into a WASP, and I was never going to be typecast as a Jew. I kept up the dancing, singing and acting lessons, went to auditions, and even put a nightclub act together, hoping that good reviews might help casting directors see me as someone ready to break out of the chorus and into roles. I sang at Playboy clubs, Dangerfield’s, and too many hotel venues on the road.

But my career in show business never really took off as I hoped it would. A few years later I found myself filling out a form about identifying one’s “strong points” at a career counseling session — and suddenly pictured myself in a radio studio.

In 1977, I started working as a newscaster on WPIX-FM, an adult contemporary music station in New York City. It wasn’t until my second New York radio job, at the all-news station WINS-AM (known as “Ten-Ten Wins” on air), that I finally had my “Who Me, Mr. Rodgers” moment.

My news director, knowing nothing of my theater background (I hadn’t told anyone, scared that no one would hire me if they thought I’d be leaving any moment for a job in show business), assigned me to cover some Broadway shows and then named me theater critic, a post I held for 13 years.

“Fiddler” has proven to be actor proof. Every one of the many productions I’ve seen has triumphed, including several Broadway revivals and a New York Chinatown grade-school version in which the Chinese parents and grandparents in the audience wept for the Russian Jews who, just like them, were forced to leave their homeland.

When I see shows these days, I try to look beyond the actors’ talent and understand what look or quality got them the job.

But I no longer imagine myself trying to fit in or wonder whether, had I only been different, I could have gotten this or that part. What matters is finding a role that fits me.

Leida Snow is a New York communications coach and speechwriter. Her website is www.leidasnow.com