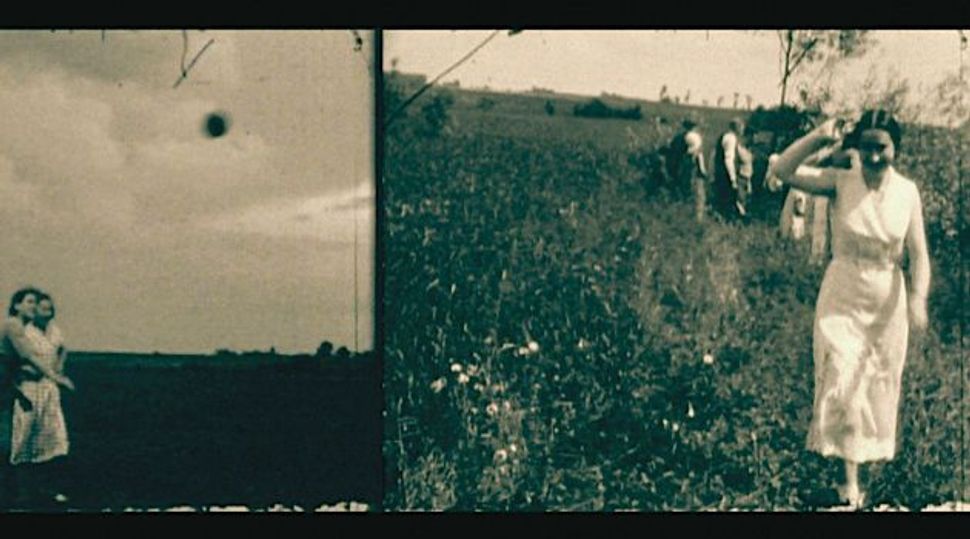 Stolen Moments: ‘Letters to Afar’ is comprised largely of dramaticallty edited footage of Polish home movies taken during the 1920s and ‘30s. Image by from the archives of the yivo institute for jewish research 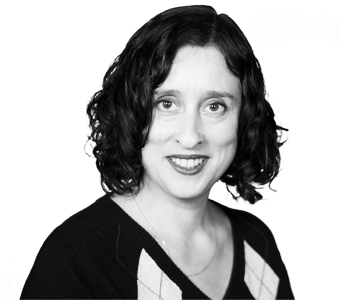 — From Peter Forgács’ ‘Letters to Afar’

Peter Forgács’s beautiful and heartbreaking video installation “Letters to Afar” at the Museum of the City of New York consists of several video projections accompanied by music and narration. The audio comes from speakers that hang from the ceiling inside transparent hoods. The large, darkened room is filled with hushed ambient sound — music and lists of names and bits of narrative — but the hoods focus the sound in places, and this mind-bending hasidic tale is the first thing you hear when you enter the room. As you’re trying to make sense of it, a boy’s face appears on a monitor. He looks about 10 years old. Dressed in hasidic garb, he is goofing around and grinning at the camera in stark sunlight. You see him in split-screen: sometimes in action — playing with his hat, shaking hands with a man in a suit (the filmmaker, perhaps?), and sometimes in freeze-frame, in close-up, stilled long enough for you to study and memorize his features. The boy was filmed in 1935, in Kazimierz — a Jewish neighborhood of Kraków, Poland.

Using dramatically edited footage of interwar Poland, Forgács creates an immersive monument to a vanished world. “Monument” is not the right word actually, since it implies something grand, static, and permanent. Forgács’s installation, though massive — it consists of six hours of footage playing on multiple screens — is an intimate and deeply moving experience.

The films in the installation, from the archives of the YIVO Institute for Jewish Research, are fascinating in themselves. Throughout the 1930s, well-to-do Jewish American immigrants who could afford home movie equipment traveled back to their hometowns, filming the daily life of their relatives and communities in Łódź and Kraków, Warsaw and Vilna, as well as in smaller places such as Nowogródek and Oszmiana, Kolbuszowa and Kurów. A few were made as purely personal family records. Others were marketing or fundraising tools. The footage of Łódź and Warsaw, taken by the travel agent Gustave Eisner, is heavy on monuments and landmarks, promoting travel to Poland. Several other films were made by landsmanschaften — New York-based hometown aid societies that raised money to help specific towns and villages in the “old country.” Stylistically, most of these are very much home movies, full of touchingly familiar tropes: abrupt shifts of the camera; people posing awkwardly, accustomed to still photography holding smiles, then remembering to wave; others shying away. There is a sense of visceral repeatability that we don’t expect from historical footage — perhaps because most history documentaries focus on public figures and important events, using films made by professionals, for public consumption that imply a certain distance. Watching these, I kept thinking, “I know these people; these could be my relatives.” Some scenes of Warsaw are shot on color film — don’t miss them, they’re the definition of uncanny.

Talking about “Letters to Afar,” Peter Forgács has likened his process to forensics, and compares these films to a record of a crime scene just before a crime. We don’t know much about the hasidic kid in Kraków — just that he was enjoying being filmed, and what his street looked like. But we know, with a nearly 90% certainty, that he didn’t live to be an adult. Forgács chooses to concentrate entirely on peacetime, and not to include any references to Shoah. The installation’s impact depends on our awareness of the tragedy yet to come.

During a conversation with Forgács in November at the Museum of the City of New York, documentary filmmaker Alan Berliner pointed out that the passage of time always imbues documentary footage with layers of representation that the original makers didn’t intend. Watching a wedding video in the aftermath of the couple’s divorce is not the same as watching it the night after the wedding. To watch any home movie made 80 years ago is to know that most people in it are dead. But in the case of these films, it wasn’t just individual persons who died, but also an entire community, a culture, a way of life.

Just as a couple in a wedding video have no idea that they will wind up divorcing, the footage in “Letters to Afar” conveys little sense of anticipation of the catastrophe. To be sure, these films and the accompanying narration depict a lot of suffering. When Gerold and Lillian Frank return to the village of Kamionka to visit their families, they discover a bleak life of poverty and deprivation. The footage looks almost as though the Franks traveled in time instead of space — 20th-century New Yorkers visiting a 19th-century world. A narration from an essay that Gerold Frank wrote for The Nation accompanies the film. Frank describes packing for their return trip to America: how he and Lillian had given away all of their money, medicine and clothing. When they’re about to leave, a delegation of village elders comes to see them — “medieval, strange, memorable” — telling them that they are only the second American couple to visit Kamionka in the last 50 years, and imploring them to tell America of the community’s plight.

Frank makes the promise to do his best, warning the elders that he’s “only a tourist, an unimportant man.” A quote from Frank’s essay appears on screen, above a vista of a empty field: “Do the Jewish elders wait, in the cold, barren village of Kamionka, in all the cold and barren and hungry villages of Poland, do they wait still?” Because we know the answer to Frank’s question, the implied optimism of this waiting, a glimmer of hope that things might improve, is even more heartbreaking than the bleak reality depicted in the film. This optimism is most explicit in the landsmanschaft films, whose purpose is to show concrete improvements: how American money can bolster civic institutions, sponsor summer camps and orphanages, sports teams and vocational schools, get people shoes and clothes, subsidize interest-free loans.

The film of Nowogródek, made in 1931 by the president of the Nowogródek Relief Society, Alexander Harkavy, is touchingly upbeat, showing all sorts of great things about the place: its many synagogues, banks, libraries, the Jewish hospital, a football club, a fire brigade. Harkavy, who emigrated from Nowogródek as a teenager, is shown meeting with the mayor and overlooking the town’s market square. “I finally reached the gates of my great, beloved town… The sight of Nowogródek moved me to tears,” he says. “It was 43 years since I had left the place where my cradle once stood… I was expecting a lot of changes, but the market square looked exactly the same.”

A 1929 film made on behalf of the Kolbuszowa Relief Society shows the emblem of Kolbuszowa, a town whose population was 50% Jewish. The emblem incorporates a Polish eagle and a cross with the Star of David, and the narrator highlights this fact as a sign of peaceful, civilized coexistence. As we watch and listen, we never lose sight of the historical context, and the context gives the films additional, transcendent power: They speak to the precariousness of life in general, to the poignancy of everyday, individual joys and sorrows in the face of an unknown, collective future.

In discussion with Alan Berliner, Peter Forgács called himself an anthropologist and an archeologist rather than an “artist,” and this attitude is reflective of his approach. Forgács alters the original footage by cropping it slowing or stilling it in parts, and by occasionally flipping it and showing mirror-image projections side-by-side. The objective of his manipulation seems to be emphasis — the flips and side-by-side repetitions, he said, allow the viewers to contemplate the same scene from multiple perspectives; the stilling calls attention to details and characters that could have been ignored if we were watching a wide shot of a crowd scene. The films are grouped into cinematic collages, or “orchestrations” — sometimes, as two screens side by side, sometimes in a triptych. Occasionally one in a group of screens remains blank, and sometimes there is a wide shot on one screen, with a close-up on another. Sometimes, all screens display the same scene, with subtle shifts in timing.

Text is used sparingly — mostly to identify landmarks. The music, an original score by the Klezmatics, is evocative and subtle. Like the best documentary scores, it doesn’t call attention to itself, but it deepens our experience of the films. The voice-over narration consists of quotes from the filmmakers, explaining what we are seeing on screen. Forgács includes lists of names and occupations, and close-ups of faces and piercingly relatable scenes: a girl applying lipstick, a bus arriving in town, a tourist awkwardly interacting with a market vendor. His objective seems to be to pick out memories of individuals from the haystack of collective history, and by doing that, to find a new way to tell the collective history.

It’s safe to assume that each New Yorker has a Holocaust monument in his or her head. For those of us without personal experience of the tragedy, these monuments can become impersonal, and too imposing to contemplate. In public spaces, personal objects placed in the foot of a monument — letters and flowers and mementos and, sometimes, food — return meaning to it, rescuing it from becoming merely a feature of the landscape. “Letters to Afar” will do that to the Holocaust monument in your head.

Exiting the installation, you’ll hear the hasidic tale again, and if you listen to it from beginning to end, you’ll feel struck by its allegorical power. You may think of the old country as the pure spring; the new country as the heart of the world. You may contemplate the righteous, and tragically powerless, travelers who tried but failed to keep the pure spring alive. You may be grateful to Peter Forgács and the YIVO Institute for doing the righteous thing again: weaving the threads.

Anya Ulinich is the author of ‘Petropolis’ and ‘Lena Finkle’s Magic Barrel.’