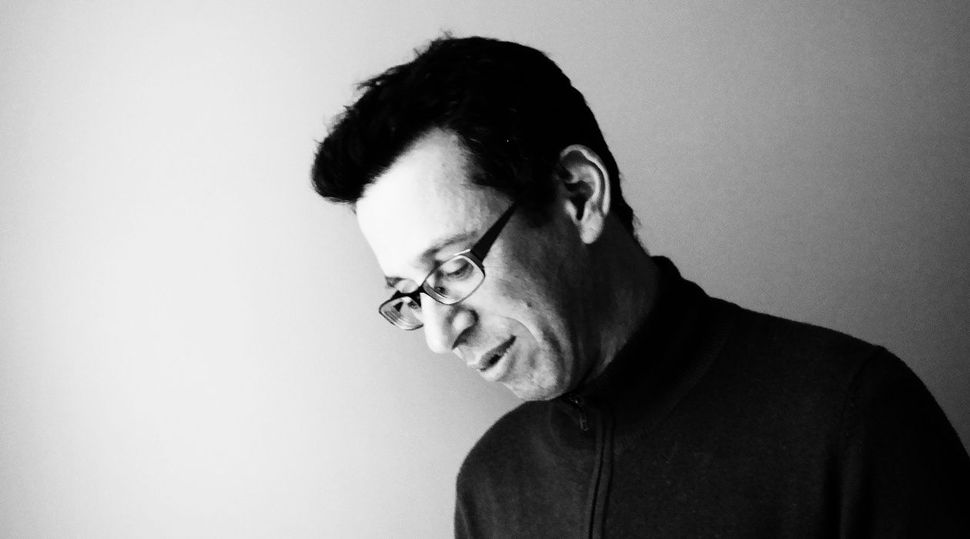 Using His Head: Assaf Gavron is a novelist, translator and founder of the Israeli Writers Soccer Team. Image by Fana Feng

If you are hoping for the Israeli ‘War and Peace’ from Assaf Gavron’s new novel, you will be disappointed. But, as you recover from that setback, you can take comfort in Gavron’s actual achievement.

For while the heft of “The Hilltop” and the Genesis echoes of its opening words — “In the beginning” — seem to suggest lofty ambitions, to its credit, the novel doesn’t carry those pretensions past the first paragraph. Rather, in a highly readable way, Gavron deeply implicates America in Israel’s troubles while weaving together a number of compelling stories about a group of settlers.

One could accurately describe the novel as the fictional history — from soup to the possibility of nuts — of an illegal satellite community that buds off from a West Bank settlement. But Gavron’s achievement is to strip Ma’aleh Hermesh C (it’s actually the satellite of a satellite) of all the expectations, projections and stereotypes that Western readers usually have of “settlers.” And instead he makes it about the real, fascinating people who live there.

Novelist, translator and founder of the Israeli Writers Soccer Team, Gavron is best known in America, if at all, for his 2010 novel “Almost Dead.” A best-seller in Israel, its title is more literally rendered “Croc Attack,” as it was translated in Britain and Australia. The well-paced novel recounts the tale of Eitan “Croc” Einoch, who is muddling through a midlife crisis occasioned, at least partly, by his survival of a number of terrorist attacks on Israelis by Palestinians. It was a sly, slightly left field, presentation of the delicate state of Israeli-Arab relations, and it portrayed the protagonist — and many of the Palestinians with whom he interacts — as slightly bemused by the inevitability of their historical context.

This convergence of deep historical intentionality and curious personal happenstance carries through to “The Hilltop,” which, though located in a settlement, only includes geopolitical intrigue and ideological struggles as oddly tangential plot intensifiers.

In a terrain usually inhabited (literally and figuratively) by extremists and intransigents, these settlers seem more affected by farming and living arrangements than by any broader political context. In some ways the novel is the opposite of a conspiracy theory. Instead of a purportedly nonfictional attempt to show how, however unlikely, a group has plotted to cause a particular major event, “The Hilltop” is an explicitly fictional attempt that shows how profoundly implausible it is for anything to go to plan even on this tiny scale.

It’s also refreshingly difficult to locate the narrative stance. There’s an element of what university professors call “free indirect style” here, where the sentiments of the characters influence the otherwise non-partisan narrative, and the pervasive influence of language on how we see things is an implicit theme. Americans understand what’s going on in one way, Arabs in the neighboring village a different way, and the army a third way. The settlers on the titular hilltop are themselves deeply affected by what they take as biblical language even though it is often not biblical, but from rabbis of varying authority.

Translation of texts is part of the problem of the situation, but so is the translation of American influence. Red-headed Josh, who discovered as a young adult that he is one of the anusim, or conversos, uses the N-word at a strange moment, and then, trying to appropriate the local idiom in a less linguistic but equally inflammatory way, throws a stone at another inappropriate juncture. Sheldon Marmelstein, who is a cipher for introjecting American funders, turns up to see the playground he has paid for without any grasp of the situation or any inkling of the scenes that will play out there — it’s a metaphor.

A Washington Post reporter gets lost, ends up on the settlement, and writes an important story that, for contingent reasons, he never follows up. From direct White House interference to indirect MMORPG game-playing interactions, the novel lays out the myriad ways in which America is deeply implicated in the West Bank.

Many writers have made the link between kibbutzim and settlements: both are ideologically underpinned communities whose existence provides, on the one hand, a group of disparate and troubled refugees with a home and meaning and, on the other hand, helps further a certain sense of how Israeli nationhood should survive.

At one node of the book we find a pair of kibbutz-raised brothers: Gabi and Roni Kupper. Roni, the elder, has been deeply influenced by his time in America, where he ended up at business school after successfully founding and running a pub in Tel Aviv called Bar Bara-Bush. After failure in America, he ends up at his brother’s hilltop room where Gabi has tried to reinvent himself — changing his name from Gavriel Kupper to Gabi Nehushtan. He explains that this is from a cognate of “copper” in Indo-European to a cognate of “copper” in the Hebrew. But, as his brother points out, Kupper is from “cooper,” meaning barrel-maker. In a telling detail on the uses of authority in the novel, Gabi is nevertheless content with a rabbi overruling that etymological point.

Gabi, the closest thing to a central protagonist, changes his name, but cannot fully escape his past and his nature. He was a psychologically sick boy and has serially bullied people throughout his life, including his son. He has been prosecuted, punished and forcibly excluded from his family life. He saws down and helps burn the local Arab village’s olive grove. It is testament to Gavron’s writing skill that he makes Gabi touchingly human. Even when he betrays his rules of propriety with a married woman in direct contravention of their religious beliefs, there’s a childlike innocence to it that is key to the tone of the book.

Gavron humanizes the mixture of unstable and deeply unpleasant characters who comprise the settlement. Having a sense of political mission, cultural entitlement and religious fervor gives the residents a sense of something beyond themselves to believe in. And, just like on kibbutz, they do transcend their personal needs and psychological damage.

There’s no self-conscious literariness to this book. It’s a character-driven slice of life on a representative hilltop. But its no-nonsense density manages to convey the texture of their day-to-day life; their childish isolation from the world as a whole. The whole settlement appears to be an orphan, either literal or figurative. These settlers are less insular conservatives than “frum hippies.” When the practical leader of the settlement, Othniel, calls various ministers for help and information, it feels like nothing so much as like calling to wheedle favors from a guilty foster parent.

The remote hilltop attracts drifters and those in need of the external meaning in their lives that religion, politics, farming or close-knit community can provide. But the politics is marginal — these are not, in general, believers in details. Their observance of religious details would appall any rabbi, their social interaction would appall any settlement-supporting politician. These are fascinating characters but nearly all have at least one profound character flaw. You might want to hang out with some of them, but not for long. Their violence, infidelities, inconsistencies, sloth, greed and betrayal, all on a mundane level, are described sympathetically though with no excuses. These are human failings and the hilltop is full of failing humans.

Although the settlement has a smattering of ideologues and fervent religionists, the stories Gavron tells are of frontier hippies and social refugees. There are families in search of roots, kibbutzniks in search of refuge, and youngsters (soldiers, immigrants, born settlers) on journeys of self-exploration. Imagine today’s separatists and spiritualists in America’s western states and you are halfway there; Imagine them on a contested border — or, like the good people of Ohio in an election year, occupying a vital constituency — and you are close to imagining the denizens of the hilltop.

Gavron’s twin achievements are providing a gripping account of a settlement, covering its development to the present day as well as a bundle of representative stories of its inhabitants while, at the same time, making the location seem almost unremarkable.

And so, if there was one thing to take from “The Hilltop” apart from the invaluable service that fiction provides in illuminating our world, it’s how little we know about Israel and the settlements and how dangerous our ignorant projections can be.