How ‘Aladdin’ Became A Hanukkah Musical 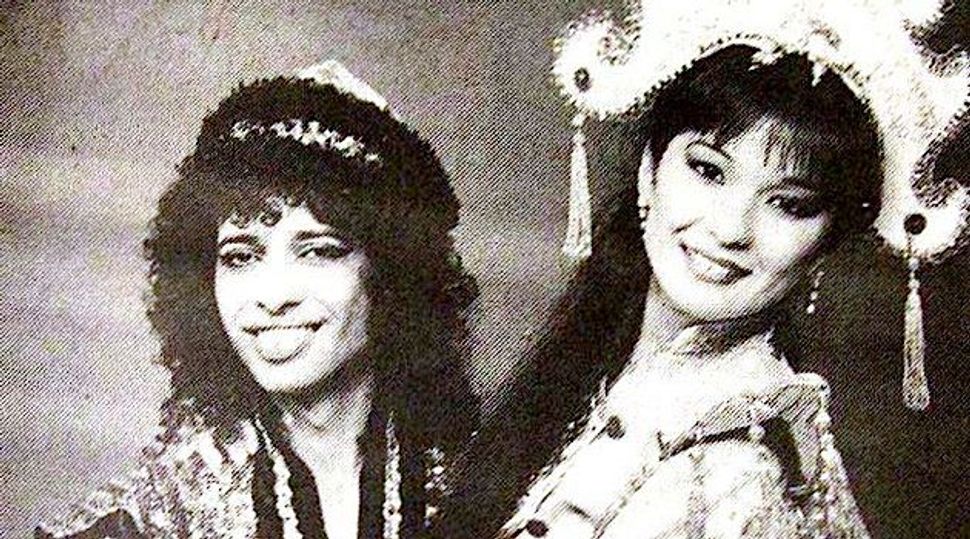 A Friend Like Me: ‘Aladdin and Yasmin’ is being performed over the Hanukkah holiday in Tel Aviv. Image by courtesy of dan almagor

Over Christmas last year, the New Wimbledon Theatre in South London staged — as many English theaters do this time of year — the story of “Aladdin.” The comedienne Jo Brand played the Genie; former “Britain’s Got Talent” contestants Flawless were the Peking Police Force; and faded television presenter Matthew Kelly donned a dress to play Widow Twankey.

Meanwhile, over the Hanukkah holiday, at the Charles Bronfman Auditorium in Tel Aviv (home of the Israel Philharmonic Orchestra), reality show stars Harel Skaat — in a constant state of near-shirtlessness — and Shiri Maimon headlined a musical production of “Aladdin and Yasmin,” in which comedian Eli Yatzpan played the Genie. Though these two different productions were on different continents, and staged for different holidays, a closer look reveals that the two versions of “Aladdin” are, however, more than just distant cousins.

Christmas in England isn’t Christmas without pantomime. A form of musical theater, it is a source of entertainment for families, a money-spinner for theater owners and producers, and a reliable source of work for celebrities of questionable status. The origins of pantomime are to be found in commedia dell’arte, whose stock characters, colorful masked costumes, and broad, physical shtick arrived in England in the 16th century. It was then that John Rich, actor-manager of the Theatre Royal in the Covent Garden district of London, who in the early 18th century isolated the harlequin character, made it the star of the show, and developed the comic chase sequence which would become a stock pantomime feature. These harlequinades were told in mime, set to music, and were heavy on slapstick humor and general clowning around.

By the Victorian era, the harlequinade was superseded by the modern pantomime. These productions are adaptations of European fairy tales — “Cinderella,” “Jack and the Beanstalk,” “Sleeping Beauty,” “Snow White” — or children’s stories such as “Peter Pan.” Whatever the tale, its elements are rather similar: The music is typically adapted from existing pop songs; the audience is encouraged to “aww” at victims, hiss at villains, and shout out, “He’s behind you”; and, central to the piece is the pantomime dame, played by an older male D-list celebrity, with dialogue laden with innuendo and double entendres.

“Aladdin” is a little unusual in that its source is a Middle Eastern folk tale; its setting of Imperial China is a reflection of the fascination with the Orient that gripped Britain in the mid-19th century. Although elements of the 1992 Disney movie have been incorporated over the years, still “Aladdin” is usually played by a woman (as most principal boys are in pantomime). The villain remains Abanazar, not Jafar, the princess Yasmin, not Jasmine. Widow Twankey, the most famous dame in all of panto, was first incorporated into the show in 1861. She owns a Chinese laundry, fronted by a character called Wishee Washee — this “Aladdin” is nothing if not crude in its racial stereotyping. Aladdin has become in many ways the archetypal pantomime — last year, 17 productions were staged around the U.K., making it the third-most popular pantomime of the season.

Though the Jewish Purim spiel (the precursor of Yiddish theater) probably predates the panto, the contemporary Hanukkah musical is a decidedly newer beast. The earliest Israeli plays for children were pedagogical affairs, both in content and in institutional backing, organized mostly by the Association of Preschool Teachers. Authors of children’s literature often wrote plays as well. Slowly, private producers entered the scene: in 1957 a very young Menahem Golan, soon to become a legendary film director and producer, directed a memorable “Gulliver in the Land of the Giants.”

The great poet Avraham Shlonsky, who like his contemporaries Hayim Nahman Bialik and Leah Goldberg, adapted the tale of “Rumpelstiltskin” into a play in rhyme called “Utz Li Gutz Li,” that the director Yossi Yizraeli and composer Dubi Zeltzer turned into a musical at Tel Aviv’s Cameri Theater, where it runs to this day. 1971 saw another original and long-running musical with roots in the Brothers Grimm — “Hannale’s Sabbath Dress,” about a young girl who dirties her white Sabbath dress while assisting an old man (the moon takes pity on her and cleans the spots with its rays). Throughout the ’70s and early ’80s, the Children’s Song Festival, and later its competitor the Festigal, filled auditoriums over Hanukkah with a program that included new songs for kids sung by some of the country’s most popular singers, the same songs sung again by children, and finally a vote by the audience for best new song.

Sometime in the ’80s, though, the offerings became a good deal more commercial. Following the lead of the Festival and Festigal, productions began to congregate around the weeklong Hanukkah vacation, and they did everything to maximize their profits. Performance spaces grew larger and tickets were sold in bulk to workers’ unions. The musicals produced during Hanukkah were often original adaptations of famous fairy tales that had already been prominently adapted, whether by Disney or Broadway (before the two became synonymous). TV stars were recruited to perform at least three shows a day –— and often twice as many as that. To help make the feat humanly possible, the music and singing were usually pre-recorded. Often at least one important female character was a man in drag. There were some wonderful productions — a 1989 “Peter Pan” and 1996 “Jungle Book” come to mind — but they were exceptions. In short, the Hanukkah musical looked an awful lot like the English Christmas panto — they even tended to overlap. But could the Hanukkah musical have been influenced by the panto? 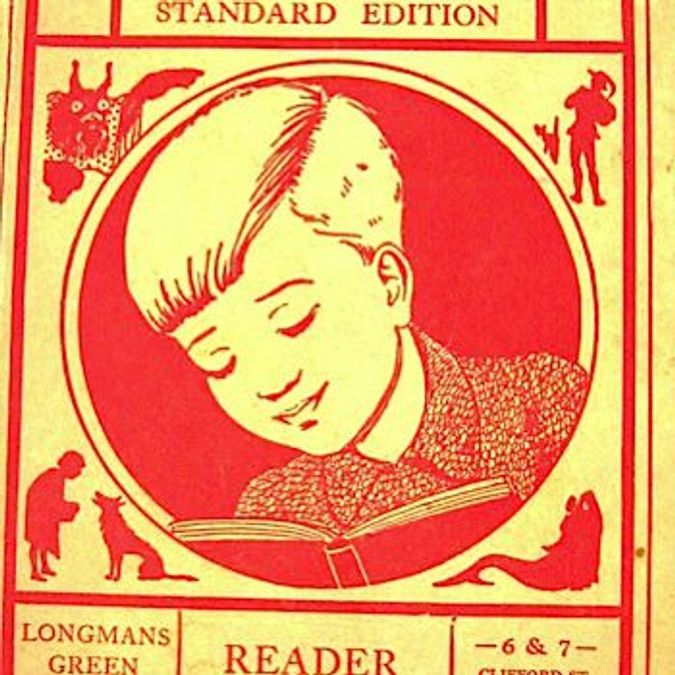 Early Reader: Dan Almagor learned of ‘Aladdin’ from a school book used during the British mandate in Palestine Image by Courtesy of dan almagor

“Gunner, you’ve hit the target,” Dan Almagor wrote in reply to an email asking if he knew of any connection — real or speculative — between pantos and Hanukkah musicals. Almagor’s encyclopedic knowledge of the annals of Israeli performing arts is legendary. Over the course of his long, prolific career as playwright, lyricist, scholar and television personality — among other professions — he seems to have been involved in every other noteworthy theatrical production. But he made some of his greatest contributions to Israeli culture as a translator, helping expose audiences to playwrights from Shakespeare to Arthur Miller, and to some of the greatest musicals around: “My Fair Lady,” “The King and I,” “Guys and Dolls,” “Fiddler on the Roof,” and even “The Producers.” And in December of 1986, as he patiently explained, Almagor inadvertently helped create the modern Hanukkah musical, when his version of the “Aladdin” panto opened in Tel Aviv’s now-defunct Cinerama. The Israeli producer Miriam Etzioni had bought the rights to London’s “Aladdin” from the British producer Paul Elliott, and even brought in the original director, Carole Todd.

Unlike the pantos it mimicked and the Hanukkah industry it would spawn, Almagor’s “Aladdin” had a very solid cast that included some of the country’s most popular entertainers at the time — the comedienne Rivka Michaeli and the singers Arik Lavie, Sassi Keshet and, as Aladdin, Izhar Cohen, winner of the 1978 Eurovision Song Contest (Todd, the director, reportedly said that Cohen was “the most Aladdin of all the Aladdins” she’d directed in the part).

Almagor admitted that this particular translation was far from faithful. “Most of the songs in the English version, in true panto tradition, were parodies of English pop songs sung by famous television stars,” he said. “But no one had ever heard of them in Israel, so I appropriated different songs that audiences here would appreciate. Carole Todd was a little surprised at the changes I’d made, but she quickly adapted to them.”

For Almagor, now 79, the “Aladdin” connection started in his childhood, when he was an elementary school student during the British mandate in Palestine. Pre-State Israelis learned English from a school book designed for use in India, called “Reader One.” “It opened with words that every child knew then, and that even became the basis for a folk dance popular in the youth movements and the Palmach,” Almagor said. “It was the story of Aladdin, albeit with some odd geographical changes: Once there was a wizard. He lived in Africa. He went to China to get a lamp.”

Today, the Hanukkah musicals comprise an industry which generates revenues of around NIS 200 million per year and whose popularity, in terms of tickets sales at least, is only increasing. This year’s most noteworthy productions include an adaptation of “101 Dalmatians,” starring 1998 Eurovision Song Contest winner Dana International as Cruella de Vil, and an “Arabian Nights” starring torch singer Miri Mesika and produced by budget supermarket magnate Rami Levy (all tickets, competitively priced at 20 NIS, have been snatched up). “I think it’s thanks to ‘Aladdin’ that producers started mounting similar musical productions on Hanukkah,” Almagor said. “They do so to this very day, in a similar fashion, without anyone ever mentioning the influence of English panto.”

Tal Kra-Oz is a writer and law student living in Jerusalem. Liam Hoare is a writer based in the United Kingdom.

How ‘Aladdin’ Became A Hanukkah Musical