Israel Zamir, a Man Who Was Far More Than Isaac Bashevis Singer’s Son 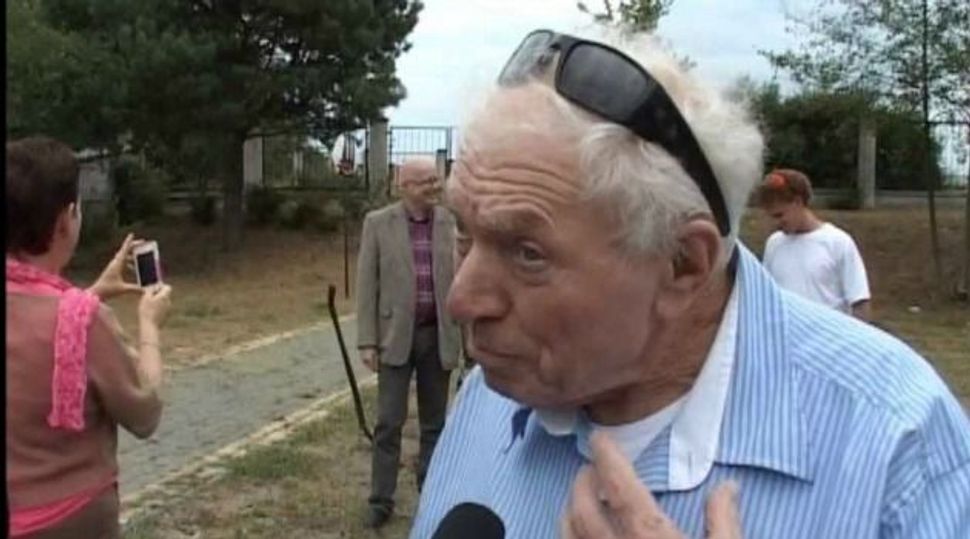 Singer of Tales: Israel Zamir has died at the age of 85. Image by Youtube

The journalist, author, and translator Israel Zamir, who died on November 22 at age 85, deserves to be remembered as more than just the son of Nobel prize-winner Isaac Bashevis Singer (1902–1991). As he wrote in Journey to My Father, Isaac Bashevis Singer, a 1995 memoir which is due out in paperback in June 2015,, he was born in Warsaw in 1929.

His father abandoned him age five, shortly after his mother, the political activist Runia Shapira, was jailed for three months in Warsaw’s harrowing Pawiak prison. While his mother was imprisoned, the toddler noted the absence of his father, who had rented a room elsewhere in Warsaw to better concentrate on his writing, leaving the care of his son to friends of Shapira. Soon afterwards, Bashevis opted to go alone to America on the invitation of his brother the novelist Israel Joshua Singer (1893—1944), a shorter-lived but — some Yiddish readers still maintain — better writer than Bashevis.

By the late 1930s, Zamir and his mother had made Aliyah to Israel through Russia and Turkey, after Bashevis’s putative promises to bring his wife and son over to America proved insincere. They moved to Beit Alfa, a kibbutz in Israel’s northern district near the Gilboa ridge. There Zamir was buried after almost eight decades as a kibbutznik. A long-time employee of Al-HaMishmar newspaper and Maariv, Zamir published nine books, including “Agil Ba’ozen: Sippurim” (“Earring: Stories”). He translated Bashevis’s work into Hebrew, following the advice he heard from his father, as recounted in “Journey to My Father” when he visited New York. Zamir showed the elder man some of his own work and Bashevis “glanced at it only a few seconds, then he gave it back to me with an angry expression: ‘Why don’t you translate my books instead of writing your own?’” Zamir also co-wrote with Motti Lerner a play staged by the Habima Theater, adapted from “Two,” a story by Bashevis.

His father sometimes reflected a high-metabolism, angst-ridden urban hondler personality, anxious to advance his literary career or persuade a damsel of his charms. Zamir was a far more deliberate, slower-spoken rural persona. This is only reasonable, since he spent almost all of his life on a kibbutz. Zamir was also steadier emotionally than his skittish progenitor, the very model of the well-grounded Sabra compared to the flighty shtetl Jew from the Old Country. Unlike Bashevis’s nervously adopted stand-up comedian style à la Myron Cohen, even at stately occasions such as the Nobel Prize ceremony, Zamir was a serious, candid person, sincere without being severe. By contrast, Bashevis loped around with total self-absorption and a barely restrained hair-trigger temper, oddly reminiscent of Lee Strasberg playing the role of Hyman Roth in “The Godfather Part II.” Accepting there were more important things than fiction, let alone a high profile career writing fiction, Zamir embodied a clear-eyed awareness of reality, of talking tachlis, another virtue of his generation of émigrés to Israel.

Bashevis was fully aware of the differences between them. In a 2013 interview with the Yiddish Book Center, Zamir says that a 1955 New York visit, the first time he had seen his father since he was five years old, was initially disappointing. Bashevis only warmed to him after a few days when he landed a job as a truck driver, proving himself to be a resourceful and independent Israeli, unlike the paternal prototype of the helpless esthete or luftmensch, in need of a constant support system to survive. The Yiddish Book Center interview by a sympathetic off-camera interlocutor, Christa Whitney, is further evidence of the divide between father and son. Director of the Wexler Oral History Project at the YBC, Whitney is a blonde young woman from a “half-Catholic, half-atheist home” of Lithuanian and Irish heritage. A non-Jew in the world of Jewish studies, Whitney is addressed by Zamir with grandfatherly candor. Had Bashevis been the interviewee, he would have doubtless brought along his feverish eroticized cult about shiksas – he only had to be seated next to a blonde non-Jewish lady on an airplane for torrid fiction to be inspired – which likely would have undermined any interview. Samir, who dismissed some of his father’s work as a “kind of pornography,” was a far less narcissistic mensch who related to other human beings without objectifying them (“He was in love with Mr. Isaac Bashevis Singer,” as Zamir memorably told Whitney).

In some ways, Zamir was not his father’s son, to his everlasting credit.

Israel Zamir, a Man Who Was Far More Than Isaac Bashevis Singer’s Son