Ain’t Nobody Here but Us Chickens 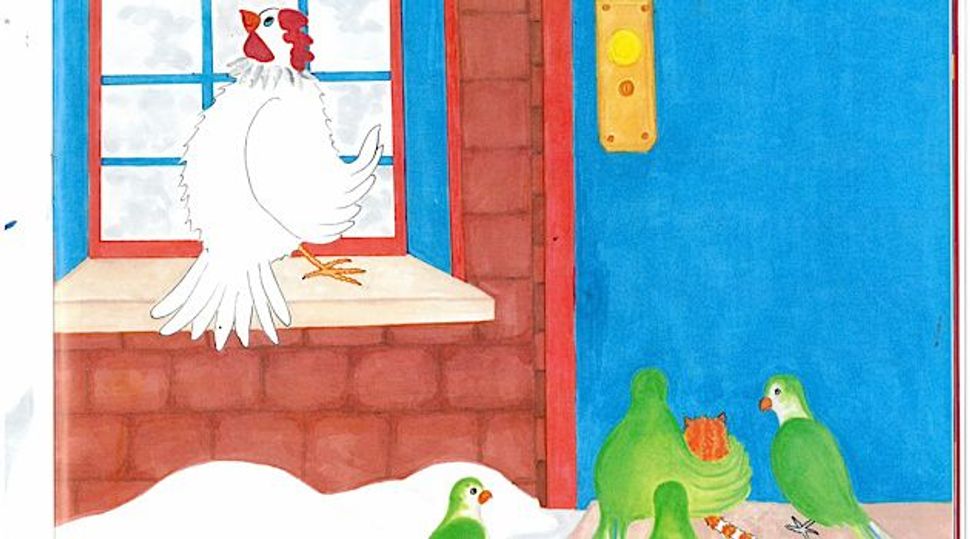 Spared from the butchers’ knife, Yiddish-speaking Yetta makes her home in Brooklyn, trying to find a new family and do good where she can.

A Holocaust survivor? Not exactly. Yetta is big white chicken with long eyelashes and a red comb in Daniel and Jill Pinkwater’s new picture book, “Beautiful Yetta’s Hanukkah Kitten.” Illustrated by Jill and written by Daniel, it’s a trilingual picture book with dialogued rendered in, and then transliterated and translated from, both Spanish and Yiddish.

(I should say here that I recently wrote a 6,000-or-so-word-long love letter to Daniel Pinkwater’s novels. Important context.)

Yetta, a latter-day Pinkwater chicken, is a homier sort of bird than Claudia or Henrietta. She made her debut in “Beautiful Yetta: The Yiddish Chicken,” published in 2010 and performed memorably that year on NPR by Daniel Pinkwater and the staff of Weekend Edition.

In that first installment, a younger Yetta escapes a Brooklyn slaughterhouse, slipping loose from a crate hauled by an organic chicken farmer named Flegleman. Skipping through the streets, she begs for help in Yiddish from some pigeons, who tell her to get lost. After saving a Spanish-speaking parrot from a cat, she’s taken in by the parrot’s flock, who adopt her as their surrogate mother.

“Maus” it’s not, but the Holocaust parable is apparent, if not a bit jumbled. Among the jumblings: Why does the farmer have a Jewish name? Is Flegleman a kapo? If so, why does he cry as he carries the chicken crate to the poultry shop? Maybe Flegleman is God, delivering his chosen people to slaughter according to an incomprehensible divine plan.

Or: Maybe I shouldn’t take this picture book so seriously.

Anyhow, if “Beautiful Yetta: The Yiddish Chicken” is the Pinkwaters’ version of Elie Wiesel’s “Dawn,” “Beautiful Yetta’s Hanukkah Kitten” is their “Day.” (Another disclosure is due here: I’ve never read any of Wiesel’s books, and I don’t really intend to. So if this “Day”/“Dawn” joke doesn’t actually work, now you know why.)

“Beautiful Yetta’s Hanukkah Kitten” takes up where “Beautiful Yetta: The Yiddish Chicken” leaves off. Yetta, looking much plumper than when she first hopped free of Flegelman’s crate, is hanging out in Brooklyn with the parrots, cooing sweet nothings in Yiddish.

When Yetta finds an abandoned kitten in the snow, she decides to save the creature. We don’t learn where this cat comes from, and we’re left to puzzle over how huge Yetta must have grown if she can tuck it under her wing, as she appears to do on a few of the pages. (One must wonder if she actually is a lost cousin of Hoboken’s Henrietta.) In fact, few answers are offered in the picture book’s 32 pages. What we do get is a Yiddish-speaking grandmother, a plate of latkes, and a particularly sweet illustration of a crowd of parrots waiting on a snowy doorstep, one wrapping its wing around the baby cat to keep it warm.

So what is “Beautiful Yetta’s Hanukkah Kitten”? An exhortation of the survivors of the Nazi horror and their descendants to recall their own plight and offer the shelter of their now-plump breasts to others now in peril? Or a celebration of polyglot Brooklyn, where Spanish speakers and Yiddish speakers eat latkes together in peace? Or a silly kids’ book with talking birds?

Whatever the answer, the illustrations are great; the Yiddish and Yiddish transliterations are fun to follow, and the chicken is funny. Buy this thing.

Ain’t Nobody Here but Us Chickens