‘Twas the Night Before Hanukkah 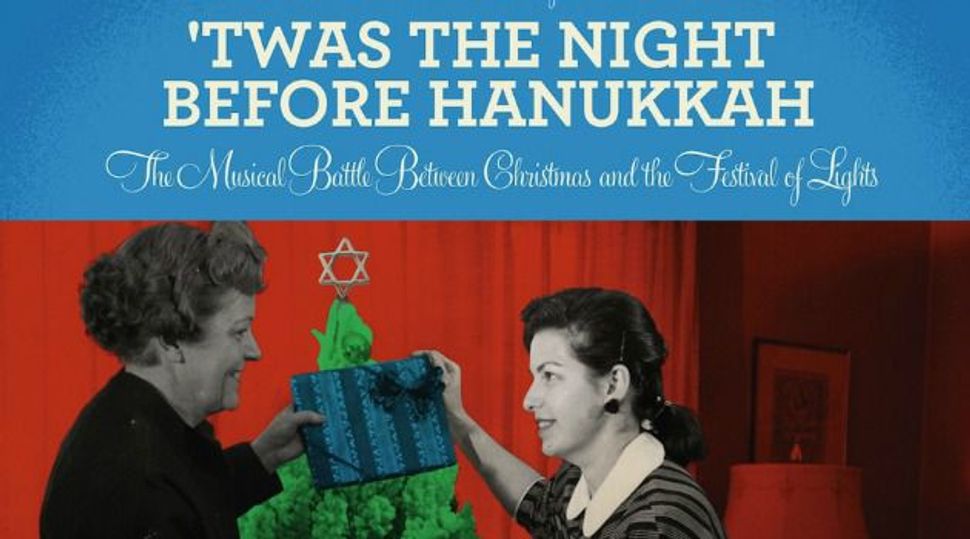 (JTA) — Sammy Davis Jr. is quoted on why he converted to Judaism in a new exhibition at the National Museum of American Jewish History.

“I became a Jew because I was ready and willing to understand the plight of a people who fought for thousands of years for a homeland,” the late entertainer said.

The comment, while somewhat facetious, has a ring of truth to it: Some of the most popular Christmas tunes were written and/or sung by American Jews – notably the children of immigrants, like Irving Berlin, who composed the iconic “White Christmas,” or in Davis’ case, new to Judaism.

It also encapsulates the theme of the exhibition, titled “‘Twas the Night Before Hanukkah.”

The exhibition, which highlights the music of Hanukkah and Christmas, and the people behind some of the holidays’ songs, is auditory rather than visual, homey rather than museumy. No documents or objects are displayed. Words are mostly absent from the walls. Standing is implicitly discouraged.

The atmosphere in the small exhibition area better resembles one’s family room: comfy couches, upholstered chairs, carpeting and floor-to-ceiling windows; shelves containing books about the holidays (like on how Jewish teenagers can cope with Christmas pressures); record players for adults and children along with holiday albums; Legos from a hanukkiyah kit.

“It’s more of an experience than a traditional museum exhibit that’s artifact-heavy,” co-curator Ivy Weingram said. “I like to think of the songs as the artifacts.” Indeed, the main attractions are the iPads resting on the blue plastic-block end tables. Visitors can get cozy on the sofas and select a song to lose themselves in through the provided earphones.

Enjoying the music while watching snow fall on Independence Hall this winter – all a visitor would seem to lack to complete the indoor Americana ideal is a mug of hot cocoa.

The iPads offer the Jewishly numerically significant 18 Hanukkah songs and 18 Christmas songs; nearly all the singers and songwriters featured were Jews.

Debbie Friedman’s “The Latke Song” and Sol Zim’s “Maoz Tsur” are among the 36, but far more fascinating are the crossovers.

What in the name of assimilation is going on here?

“All holidays, in many ways, are cultural constructions,” explained Josh Kun, a University of Southern California professor and co-curator of the exhibition with Weingram.

The exhibition grew out of the 2012 release by the Jewish organization Kun cofounded, the Idelsohn Society for Musical Preservation, of a two-CD set from which the museum exhibition takes its name. The CD is subtitled “The Musical Battle Between Christmas and the Festival of Lights.”

As if to underscore the point, the society’s website describes the CD set as the first effort at presenting 20th-century American music that’s most closely identified with the two holidays’ dual role.

The CD’s cover, also displayed on an exhibition wall, shows a circa-1940s photograph of a teenage girl lighting a hanukkiyah while her presumed sister and mother exchange wrapped gifts beside a Christmas tree topped by a star – a Star of David.

The exhibition’s goal is “to raise the big questions of Jewish American pop culture: questions of identity and of assimilation,” Kun said by telephone from Los Angeles. “Hanukkah grew in power alongside the dominance of Christmas.”

To Kun, the Jews putting their musical talents to work in this manner were neither surrendering to nor fighting America’s overwhelming Christmas tide but rather riding it. In so doing, he said, they were embracing their new American identities. To them, Christmas was a national holiday, not a Christian one.

That’s why, Kun said, their songs tended to celebrate the seasonal nature of Christmas: the chestnuts, reindeer and snow, but not the manger. That approach echoed Hollywood’s Jewish moguls churning out films high on mainstream and not ethnic — and certainly not Jewish — America.

“One of the great Jewish tactics in American life,” Kun said, “is that Jews do America better than anyone: ‘You want Christmas? We’ll give you Christmas.’ ”

Along with the musical offerings and the CDs’ liner notes, from whence the Davis quotation comes, the iPads provide holiday-centric YouTube clips like Adam Sandler performing “The“Hanukkah Song,” Joel Fleischman bringing home a Christmas tree in the television series “Northern Exposure” and the Ramones onstage belting out “Merry Christmas (I Don’t Want to Fight Tonight).”

Not that the museum’s traditional offerings are ignored in the exhibition, which runs until March 1. Printed pamphlets and the iPads offer a guided tour of all Hanukkah-related artifacts elsewhere in the building, like a hanukkiyah brought to America in 1881 by an immigrant from Lodz, Poland; a 1948 photograph showing Rabbi Chaim Lipschitz teaching Philadelphia children the Hanukkah blessings; a 1962 letter explaining Saks Fifth Avenue’s lack of Hanukkah decorations.

Naturally, too, visitors can see Irving Berlin’s piano — and the sheet music for “White Christmas.”

‘Twas the Night Before Hanukkah