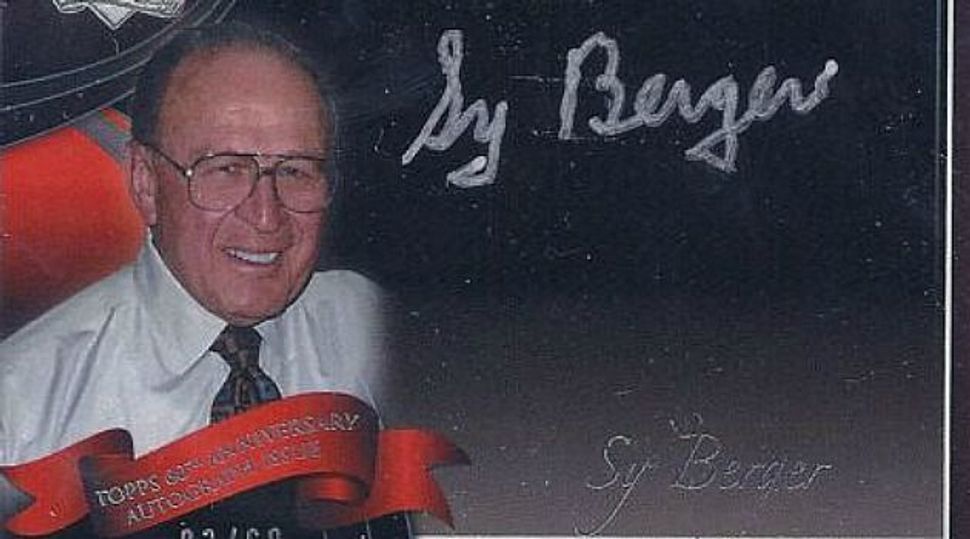 Card-a-Palooza: The million-dollar baseball card industry was created in large part by Seymour Perry Berger who was born on New York’s Lower East Side in 1923. Image by topps

Reggie Jackson wasn’t happy with the stereo. The All-Star slugger, then a few years into his career with the Oakland A’s, had earned a new hi-fi system with the royalties he’d saved from his agreement with Topps, the trading card company.

As Topps executive Sy Berger told the authors of the 1973 classic “The Great American Baseball Card Flipping, Trading and Bubble Gum Book,” he’d grown immune to such complaints: He was on a water diet, and he’d lost 35 pounds.

“You guys can’t worry me anymore, Reggie – I’m thin,” he teased the player. “I’m a thin person now.” He felt, he said, “like a kid again, like at least a quarter of a million dollars.”

Berger, who died on Sunday at home on Long Island at the age of 91 had ample reason to feel like a few hundred thousand bucks. By the early ‘70s, the man who was widely known as the “father of the modern-day baseball card” was presiding over an industry that would help transform the sports world into a cult of personality, setting the stage for today’s megastars on pocket-sized slabs of cardboard.

In those days, of course, a quarter of a million bucks was an astronomical sum of money. Jackson, who would win the 1973 American League MVP award, earned just $70,000 that season. At the time, baseball players collected about $400 each year for the rights to reproduce their images on Topps cards, and it wasn’t just chump change.

Today, coveted baseball cards routinely sell for thousands of dollars at auction. “When you think of a player, especially from the ’50s, ‘60s or ‘70s, you picture his card,” Berger once told the baseball man Marty Appel. “It was the most ‘up close and personal’ you could really get before television showed you the color of his eyes.”

Born on July 12, 1923 on Manhattan’s Lower East Side, Seymour Perry Berger was the son of a furrier. As a student at Bucknell University, Berger had a friend whose father was one of the four Shorin brothers who founded Topps, in 1938. The young graduate took a job with the company nine years later, when the main product was Bazooka bubblegum, each piece wrapped in those iconic waxy comic strips.

The goal was simply to sell more chewing gum, as Berger would explain again and again. Cards depicting professional athletes — boxers, track and field stars, baseball players — had already been used for a half century to sell other products, notably tobacco. But Berger’s innovations would shift the focus from the product to the cards themselves.

With Topps’ 1952 set, Berger and art director Woody Gelman set the template for the collectible ephemera now universally recognized as the modern baseball card. They made the cards bigger and more colorful, featuring team logos, player signatures and reverse sides filled with statistics and fun facts.

For baseball junkies, it sounds like a dream job. But it wasn’t always easy, as Berger told the authors Brendan C. Boyd and Fred Harris. In fact, “it was murder. You don’t know the agony of trying to think up something nice to say about some guy who hit .176 last year and made 25 errors. What can you say — ‘This guy stinks’?”

Unlike the hapless player he had in mind, the cards were a success — so much so that by 1956 Topps could buy out its chief competitor, the Bowman Gum Company. Despite various antitrust complaints, the company maintained its stronghold on the industry until the 1980s. By then, Berger’s cards had become a core token of pop Americana, with series devoted to Elvis Presley, Batman, “Star Wars” and dozens more franchises besides those of professional sports.

Eventually, even Beethoven got his due. When “A Charlie Brown Christmas” debuted in 1965, Lucy Van Pelt famously complained to piano-playing Schroeder that the composer “wasn’t so great.” “Have you ever seen his picture on a bubblegum card?” she asked.

Beethoven got his Topps card in 2009, one year before a rival launched a series of Justin Bieber cards. But despite the public’s ever-changing tastes, baseball players are still the all-stars of the trading card business.

“A kid can readily identify with a ballplayer,” Berger once said. “They’re not terribly tall or physically enormous. A kid can look at one of our cards and see himself.”

He was, he said, “basically in the children’s entertainment business.” And for more than 60 years he let plenty of grown men hang onto a piece, quite literally, of their own childhood.

James Sullivan is the author of four books, including “Jeans: A Cultural History of an American Icon.” Follow him on Twitter @sullivanjames.