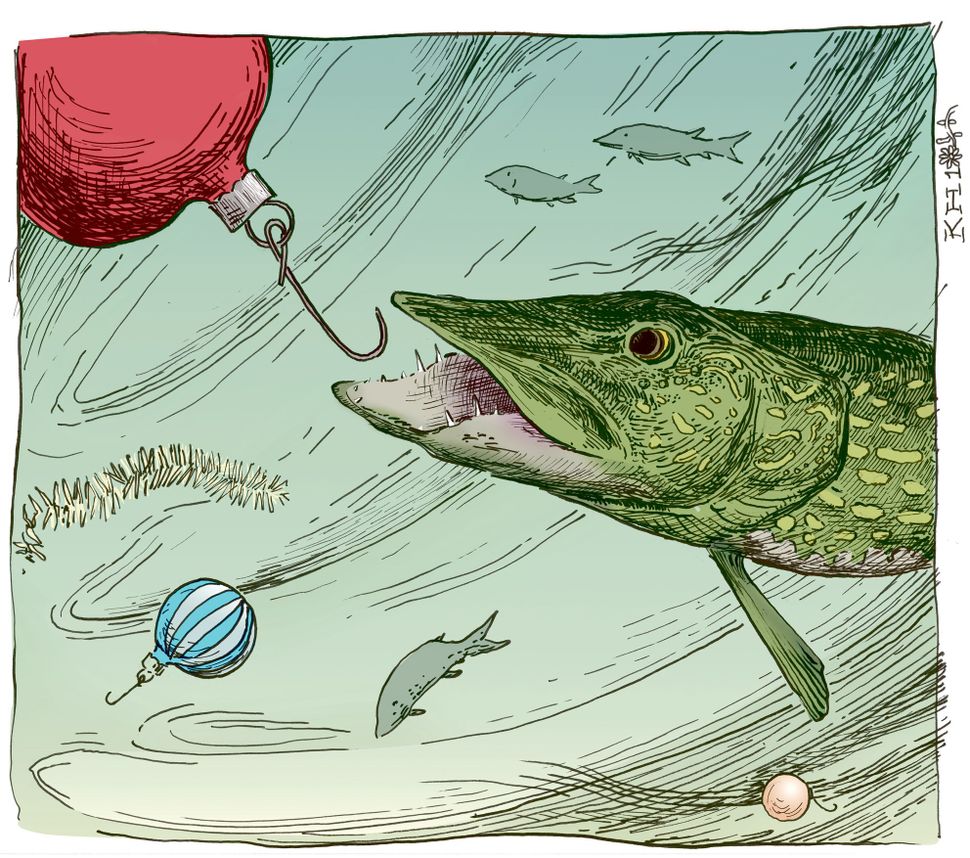 At the first poinsettia sighting, many of my Jewish friends from New York or Los Angeles recall youthful feelings of exclusion. To them I say, get over it. If you want to know authentic Christmas envy, try growing up Jewish in a frostbitten North Dakota town with a Lutheran church on every other corner.

In the 1930s, my father bolted from Brooklyn with plans to live in California. On the way, he made a stop to visit his Uncle Jake, a cattle trader who’d moved from Russia to North Dakota. The visit lasted 45 years. My father married a woman from St. Paul, and they raised three children among North Dakota’s 300 or so Jews during its postwar golden age of the 1950s and ’60s, when in Fargo — which had the biggest Jewish population in the state — we had both a Reform and Orthodox synagogue and a Jewish mayor, one Herschel Lashkowitz.

For 11 months of the year, being Jewish in Fargo wasn’t much of an issue. That changed every December, when the countdown to Christmas began.

You might imagine Fargo’s take on the holiday to be of the Martha Stewart variety, with tartan run amok and evergreen garlands looping every lamppost. Wrong. Nor was it a honkytonk holiday with rollicking rodents harmonizing in falsetto. My hometown went hardcore. The predominant vibe was “Keep the Christ in Christmas.” This was a Noel writ large and grave, starring heavily-attended church services and snow-covered Nativity scenes. For color, there were trees — inside and out — awash in multicolored balls, reindeers on roofs, and Frosty on sweaters. Stores lining Broadway were decorated, but modestly, since most of them were owned or run by Temple Beth El members — Herbsts, Siegels, Sterns, Dorfmans, Horowitzs, Sgutts, Sharks and Liszts. With virtually no African-American or Asian residents, we were the minority among a tall, blonde population whose heritage had a thick Norwegian accent (cue “A Prairie Home Companion.”) The gastronomic delicacies of the season were krumkake, for that soupçon of scatological humor any family gathering requires; lefse, a flatbread concocted of the four blandest red-state food groups — potatoes, milk, flour and lard; and lutefisk, gelatinous whitefish, cured in lye. You think gefilte fish is unappealing?

But I digress. The truth is, I longed to join the Christmas hoopla, and that was not to be. The holiday stopped at the mezuzah on my family’s front door, which was hidden behind a three-story-high blue spruce.

“Nice tree ya got there, Sam. Gonna trim her up?”

Our family dipped a toe in Christmas, but steered clear of full immersion. Should carolers pause at the icy doorstep to sing near the eve of the dear Savior’s birth, my mom knew the drill and served her Aunt Vera’s butter cookies. Fritzie Platkin was a Jewish mother, after all. She and my dad attended neighborhood cocktail parties and once or twice, I joined the carolers, since every song was drummed into me in music class. But there was no pretending that these chilly jamborees were ecumenical hootenannies in praise of Irving Berlin; on Christmas Day, Santa never showed.

Nor did my parents compensate on Hanukkah/Chanukah. No matter how they spelled it, they saw the festival of lights as a perfectly adequate minor fete during Kislev, but it wasn’t a high holiday, and they weren’t schlemiels. We ate latkes, lit our menorah, and tried to remember the second verse of “Dreidl, Dreidl, Dreidl.” There weren’t eight presents — maybe three, including flannel pajamas and if we were lucky, new ice skates or a sled. There certainly wasn’t a tree masquerading as a Hanukkah bush.

To the credit of my parents, who wanted to raise my brother, sister and me to cherish our identity, a tinseled line divided our family from non-Jews. Dick, Betsy and I bought trees to plant in Israel, attended Hebrew school, and in the summer, went to Herzl in Webster, Wisconsin, a zealous Zionist camp where we woke each morning to “Haksheevoo, Machaneh Herzl” and at night often sang the songs of Bobby Zimmerman, a former camper from Hibbing, Minnesota, whose stage name, Bob Dylan, was invoked with reverence. One summer, Abe Foxman, who went on to become the longtime director of the Anti-Defamation League, was program director. We became active in North American Federation of Temple Youth and B’nai B’rith Youth. For a full year I was the tiara-toting BBYO Sweetheart of North Dakota.

My brother had a bar mitzvah and I, a bat mitzvah, though I spent the week leading into the service reading “Gone with the Wind” rather than practice my haftorah. This convinced my mother that a bat mitzvah was a waste of time and money, and my sister — who later got even by becoming a designer of ketubot — didn’t have one. Our family didn’t gather on Christmas Day with others of our tribe for Chinese food, as I learned years later was the national Jewish custom, because the only Chinese restaurant was closed. It also served fluffy Parker House rolls with its chow mein, which gave one pause. Movie theaters? Shuttered. I suspect that at least some of the Jewish community passed the day as I did: ruminating on the huge hole where Christmas should be. I experienced December as the equivalent of a tropical depression that by the 24th had turned into an emotional hurricane.

My antidote to this debacle was to move away after I graduated from college. To my father’s disbelief, I chose the town he’d fled, New York City, where Xmas — which is how the holiday deserves to be spelled in such a place — immediately struck me as a monster bazaar whose not-at-all-subliminal message was “buy, baby, buy.” In my new home many people didn’t give a flying figgy pudding if Christ stayed in Christmas as long as the holiday was splashy. Store windows knocked my eyes out and I started a ritual of an annual trek to ogle their windows as well as the tree at Rockefeller Center. If I didn’t detour to St. Patrick’s Cathedral, I could easily forget that the fuss was for the Little Lord Jesus.

In New York I met Jews who, to my astonishment, not only admitted that they erected a Christmas tree, but also claimed to have grown up with one. It would have been easy to join their assimilated ranks, but it struck me as cheating — if my parents could resist Christmas in Fargo, surrounded by Christians, I should be able to do so surrounded by Jews on the Upper West Side. When my older son, who attended a Jewish nursery school, turned 4 he had to be reminded of the name of “that ho-ho-ho guy.”

What kept my Christmas envy in check wasn’t solely self-imposed otherness or disgust concerning the commercial devaluation of this splendid holiday. It was my occupation.

For more than 30 years, I was an editor of magazines that every December promise American women 500 easy ways to trim a tree, wrap enough gifts to fill an SUV, bake two dozen types of cookies from only one dough, build a gingerbread house designed by I. M. Pei, wear velvet, and not gain 10 pounds from eggnog and the goose they’ve roasted to go with it. These guilt-inducing issues were often planned by Christmas-starved editors such as myself who allowed their imaginations to run amok, inventing demonic ways to crack the whip over glue-gun owning readers to get them to craft, decorate, entertain, stocking-stuff, and mantel-scape 24/7 so their loved ones would be able to enjoy the Christmas our Constitution guarantees. That this put readers at risk of a collective stroke was not an editorial concern.

In my mission to help my Christian sisters do up the holiday in style, I spent decades of summers — that’s when December magazine issues are produced at big, monthly magazines such as McCall’s and Woman’s Day — encouraging women to whip themselves into a frenzy as they create seasonal perfection. This thoroughly sucked the fun out of a holiday that wasn’t mine to begin with and when December rolled around, I was relieved to be spared the work that was required to attain this red-and-green festivity and happy to go to a movie, preferably about the Holocaust, and eat Chinese food like any other self-respecting New Yorker. For Hanukkah, I wrapped a few gifts in whatever blue-and-white paper I could scrounge, threw a brisket in the oven, fried some latkes, opened a jar of applesauce, bought some donuts, and our family was good to go as we sang the blessings. That, my friend, is joy.

My brother, sister, and I each married a Jew: Dick found an Israeli doctor and settled in Southern California, Betsy wed a distinguished rabbi brought up in Utah and moved to Philadelphia, and I hooked up with a golf-club-toting Long Island Jew. God, however, has a sly sense of humor. Despite the fact that both my sons attended religious school through the senior year of high school and led Jewish youth groups, both married non-Jewish women. While neither young wife evinces the slightest interest in attending church, they have each made it clear that continuing a cultural Christmas celebration is non-negotiable. My husband and I spent last Christmas Eve gathered around a charmingly decorated tree at the home of one son and daughter-in-law. Her parents were visiting from Berlin, and I was entranced as they sang “Silent Night” in German while outside snow fell on a quiet street of brownstones in Brooklyn because, again to my father’s shock, that’s where my older son moved.

There were stars in the sky and serenity in the air. The holiday was magical. But it wasn’t mine. A 10-foot, skirt-wearing Douglas fir with the Star of Bethlehem will never stand in the corner of my living room, just as I’m highly skeptical of eating any dish that features mincemeat — beef suet, really? — the consumption of which any day now I expect the FDA to declare to be the shortest route to a valve replacement.

Will I ever eat lutefisk? Not a chance. Krumkake? Ya, if they sell it at Ikea, you betcha. I will do so remembering my many wonderful friends from North Dakota, whose Jewish population has shriveled. In our own diaspora and with our parents’ blessing, we were exported as a rich resource, much like oil currently flows out of the state.

Now that North Dakota is experiencing an economic renaissance, will we see our children return? That is a question for a talmudic scholar.

Sally Koslow is the author of four novels, most recently ‘The Widow Waltz.’