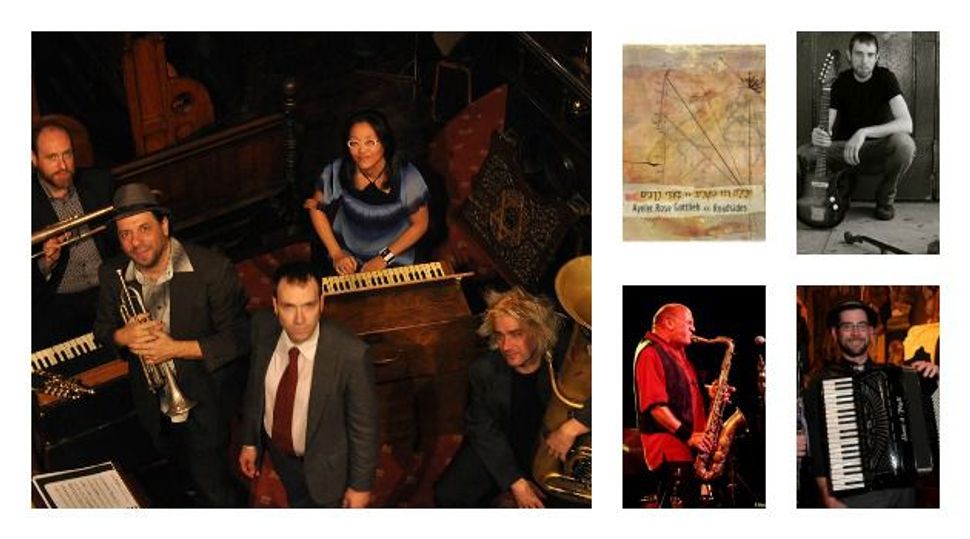 As the temperatures begin to drop and we settle into hibernation, there’s more opportunity to spend time listening and reading. And, fortunately, there’s a profusion of great new music around. Five recent recordings break out of the realm of contemporary music and, building on reflections of the past, create moments of immediate relevance.

Comprised of three virtuoso players in their early ’30s, Yiddish Art Trio is more than a klezmer band. These musicians do not lift melodies associated with the genre out of their historical settings, but rather try to engage more with Yiddish culture as a whole. The opening track of their self-titled album is a brooding interpretation of a poem by Celia Dropkin, Russian-born American Yiddish writer of the 1920s and ’30s, and features several other Yiddish poems set to music as well. Despite the dark overtones and sophistication of the album, a great deal of humor permeates the music. The aptly titled “Guilt” juxtaposes the clarinet’s soft phrasing with the backdrop of deep, grinding bowing of the bass which plays in unison with the accordion. An impressionistic piece, it evokes the heavy, obsessive, conflicting nature of the phenomenon we’ve come to know as Jewish guilt. The band’s cover of Cantor Leib Glantz’s “Shema Yisroel” may come as a surprise on an album that otherwise has no distinctly religious overtones. Yet, by turning this liturgical composition into a moving instrumental piece, the band further underscores its commitment to presenting panoramic view of Eastern European Jewish artistic expression.

Jewish cantorial music, chazzanut (or chazzonus), in its Eastern European rendition, consists of near-operatic solos performed in synagogue, presumably to inspire congregants in prayer. What can a contemporary listener make of albums of experimental music that use chazzanut to create art? Does music like this have a purpose other than aesthetic enjoyment? These are some of the questions that come to mind while listening to Yiddish Art Trio’s take on “Shema Yisroel” and also to Jeremiah Lockwood and Frank London’s project “Songs of Zebulon” and Yoshie Fruchter’s “Schizophonia.”

Lockwood has been experimenting with chazzanut for a while: his band The Sway Machinery combined cantorial melodies, punk blues, and Afrobeat into danceable, frenzied compositions. In this album, the artist does something entirely different: Lockwood chants melodies of Cantor Zevulun “Zavel” Kwartin — the legendary Russian-born chazzan of the early 20th century renowned for his baritone — and he’s as faithful to Kwartin’s sound as he is to the texts he’s singing. Every track is a heartbroken supplication. The music, if not minimalist, is certainly sparse, which only intensifies all the pleading and bleating, the grandiose and cowering tonalities, almost confessional in the nakedness of the emotion behind them. Lockwood cuts through to the prayer’s very core, while London, master trumpet player, composer, and founding member of the Klezmatics, along with a few other musicians, creates a tense, atmospheric landscape around the vocals. One of Kwartin’s most poignant tunes, “Tiher Rabbi Ishmael,” is set to a text from Yom Kippur liturgy, which recounts the tale of the martyrdom of Rabbi Ishmael and other talmudic sages. Lockwood’s singing and the accompanying music send shivers down the spine.

Fruchter’s “Schizophonia” features renditions of songs by cantorial luminaries Yossale Rosenblatt and Leib Glantz, as well as Alfred Fruchter, the singer’s grandfather. These songs could be played at a party — the rhythm-section arrangements are masterful and Fruchter’s crooning is seductive and hypnotic. On “B’Rosh Hashonoh,” the meandering, elegant guitar solo underscores the beauty rather than tension of the chanted text. While singing the “who by water/ who by fire” part of the song, the singer is less angst-ridden than contemplative or even nostalgic, perhaps stressing what it is about High Holiday prayers that matters most to so many of us: the memories associated with the time when the weight of these words sunk heavily and decisively.

Another ambitious project is Ayelet Rose Gottlieb’s “Roadsides.” Accompanied by a small collective of musicians, Gottlieb treads the borders of jazz and world music as she creates songs out of Hebrew poems. She brings together older Israeli masters Rachel and Yehuda Amichai and contemporaries Agi Mishol and Ronny Someck. She also includes poetry by legendary Palestinian poet, Mahmoud Darwish, as well as work by Naomi Shihab Nye, an American writer with Palestinian roots. Because most of the poems are written in free verse and contain uneven metrics, the music, too, is flexible, non-linear, swelling and dissipating, ebbing and climaxing along with Gottlieb’s voice. More than a singer, Gottlieb is a discerning reader and interpreter. Rather than looking to fit the words into set grooves, she seeks out the internal music of the poems and their meanings. More than just a beautiful album, “Roadsides” captures a slice of Israel’s history.

On “Fallout of the Dream,” Steve Dalachinsky — a performance poet whose work is as strong on the page as it is live — pairs up with saxophonist Dave Liebman, who is known for his work with Miles Davis, Elvin Jones, Chick Corea and other jazz luminaries. Liebman and Dalachinsky were classmates in a Brooklyn high school in the early ’60s, and the poet’s opening track recalls the time of their youth: “i came from a clean neighborhood/ in Brooklyn/ there were trees/ a bridal path/ a bike path/ the big scary cemetery/ the touch football/ the dead-end street/ the sewer to sewer stickball.” The idyllic vision is quickly interrupted: “this was the age of the atom &/ every atom of my fiber tried not to think of mushroom clouds.” All the while, as if from a remote corner of the poet’s consciousness, Liebman blows angsty phrases. The “Magic Realism” track on which Liebman plays the flute is an existential meditation: Dalachinsky’s Job-like narrator laments: “You burn the chair I sit in.” There’s something comic about that image, and the interspersion of humor and dark ruminations is perhaps what brings the pieces of this album together.

Whatever the shared dream Dalachinsky may have referred to in the title of the album, the two artists seem to be deciphering, reflecting and riffing on its scattered pieces. Perhaps, this attempt to rethink the past — whether it is the Cold War’s aftermath, the heyday of cantorial music and Yiddish culture, or the early years of Israeli poetry — is really about an assemblage of abandoned dreams, shards of broken mirrors in which contemporary artists find their own fragmented reflections.

Jake Marmer is a poet, performer and author of “Jazz Talmud.”