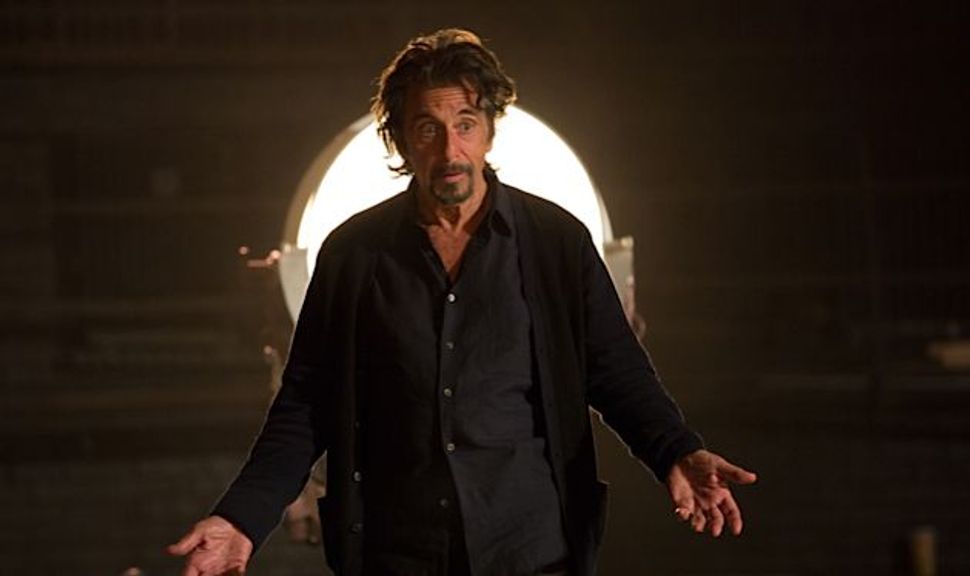 It’s always a mystery why anyone would want to turn a Philip Roth novel into a movie. Despite the author’s immense talent and celebrity, his writing — rich with ideas and emotional conflict, light on concrete action — doesn’t lend itself to the big screen. Recent attempts to render his books cinematically, like “The Human Stain” (2003) and “Elegy” (2008, based on “The Dying Animal”) resulted in boring, excessively literary treatments. Even A-list casts weren’t enough to save either film from quick obscurity.

It’s an even bigger mystery why Barry Levinson, a director known for movies like “Wag the Dog,” “Rain Man” and “Good Morning, Vietnam,” would agree, at the behest of Al Pacino, to adapt “The Humbling.” The book is not only one of Roth’s less successful works, but also one of his slightest. In its 140 large-type pages there is even less to work with than usual.

As a result, Levinson’s film — with a screenplay by Michal Zebede and “The Graduate” writer Buck Henry — is a strange creation. While most movie adaptations strip away material from their source books, “The Humbling” is forced to embellish. Whereas Roth’s novel compensates for a lack of plot with pages of dialogue and description, Levinson’s movie fills its time by adding new and bizarre ingredients. “The Humbling” isn’t so much a Roth novel transferred to the screen as a Roth novel reflected in a funhouse mirror. The original is still there, but in a totally contorted form.

And yet, despite its off-kilter feel, the movie does have its own internal logic. The story concerns Simon Axler, “the last of the best of the classical American stage actors,” in Roth’s phrase, who, at the age of 65, discovers that his talent has vanished. In the book, Axler — played here by Pacino — spirals into depression after a disastrous performance at the Kennedy Center, in Washington, D.C. He is left by his wife (who can no longer stand his depressed moping), flirts with suicide and checks himself into a psychiatric facility. There he meets Sybil Van Buren (Nina Arianda), a woman who suffered her own breakdown after witnessing her “rich and powerful second husband” (Roth again) molesting her 8-year-old daughter.

However, Sybil isn’t the primary female character in the story. That distinction belongs to Pegeen Mike Stapleford (Greta Gerwig), a woman named after the character in John Millington Syge’s “The Playboy of the Western World.” It was a role played by her mother, Carol Stapleford, when she and Axler were young actors just starting out. Axler remembers Pegeen as an infant, and has kept up a sporadic friendship with her parents.

Then one day, Pegeen, now a 40-year-old lesbian teaching at a nearby college, shows up at Axler’s front door. “I still have this image of you sucking at your mother’s breast,” he blurts out, to which she responds, “Pure class.” Despite his friendship with her parents, their age difference and her lesbianism, a torrid affair ensues.

When the book was published, in 2009, some readers surmised that Roth was projecting his own creative problems on his character, and indeed, just a few years later, Roth, like Axler, announced his retirement. Fortunately, Pacino (now 74) shows no such difficulties. There’s a small irony here that he does such a successful job playing a failed actor, but that’s a mere curiosity. In fact, if there’s a cinematic counterpart to Roth’s perfectly balanced sentences, it’s Pacino’s perfectly modulated phrases. Listening to Pacino talk is like reading Roth’s prose.

Given this parallelism, the movie may have been more successful if it had adhered to a minimalist concept — an all-dialogue model, for example, like Richard Linklater’s “Before Sunrise” and “Before Sunset” movies. Instead, Levinson’s movie expands Roth’s recipe while adding new ingredients of its own. Instead of Pegeen visiting her parents in Manhattan and telling Axler about it later, as she does in the book, the parents (Dianne Wiest and Dan Hedaya) show up in a huff and accompany the couple to the vet, where Axler gets shot up with horse tranquilizers to ease his aching back.

Instead of leaving Pegeen’s ex-partner, Priscilla, in the past, after she undergoes sex-reassignment surgery, Priscilla shows up as a black man named Prince who demands to know why Pegeen won’t be with him now that she’s sleeping with men. And Sybil, rather than being a peripheral character that only serves to add a disturbing undercurrent to the story, takes on an expanded role, becoming, in the process, much less sympathetic.

Most significant is the transformation of Axler’s tragic but mundane crisis into full-blown insanity — a crack-up in the grand manner. At the beginning of the movie, he doesn’t just deliver a flat performance, but also loses consciousness and takes a nosedive off the stage. After leaving the hospital, Axler tells his therapist (Dylan Baker) over Skype that he’s having difficulty determining the difference between acting and reality. He seems to lose track of time, and hallucinates without warning. At one point we see him in the waiting room of a fertility clinic, talking to an empty chair.

This aspect of the film is not poorly done, but movies about artists going insane are old hat. A better example of the genre was Darren Aronofsky’s “Black Swan,” in which an ambitious ballerina similarly loses the ability to differentiate between art and life. It doesn’t help that Levinson, through music and sound effects and camera angles, lays on the nightmare a bit thick. He even introduces a tired old line, attributed to pianist Oscar Levant, stating that “there is a thin line between genius and insanity.” Roth’s version of an existential crisis, though much more banal, is actually more interesting.

All this makes the movie feel oddly off-balanced, like a car with a flat tire careening toward a tremendous smash-up. Granted, this is consistent with the subject, and the ending is impressive, if a bit over the top. But the bumps in the road are not always to the movie’s benefit; the film fails to establish, for example, why Axler cares so much about Pegeen in the first place, a pretty important element considering his later anguish.

But even if “The Humbling” isn’t a great success, it’s at least an interesting failure. Maybe next time, Pacino will be content to perform just the audio book. Now that would be an adaptation worth listening to.