Why ‘Honeymoon in Vegas’ Is Quintessential Jewish Mother Story 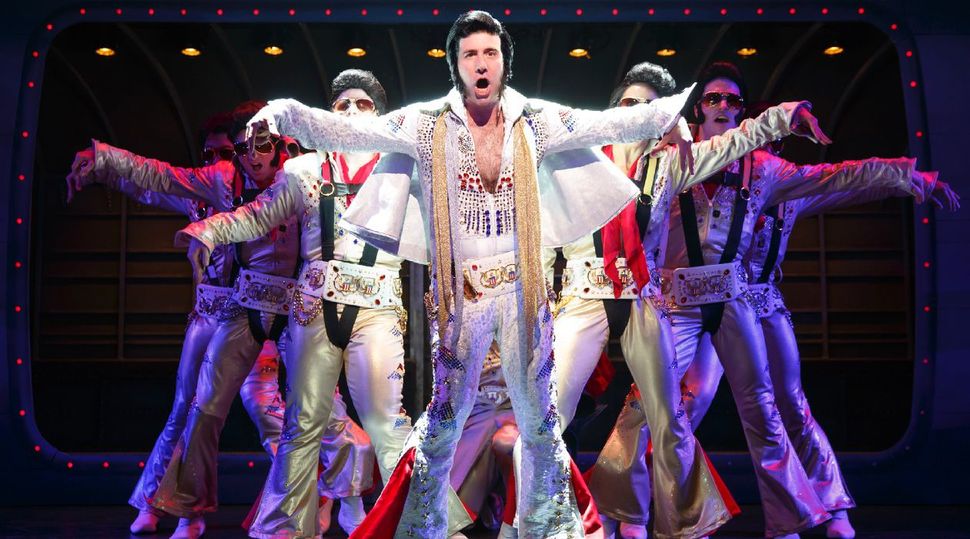 Viva Las Elvis: David Josefsberg and the ensemble in ‘Honeymoon in Vegas.’ Image by Joan Marcus

The 1989 movie “New York Stories” is composed of three short films about New York City. In Woody Allen’s segment, “Oedipus Wrecks,” his character’s overbearing Jewish mother disappears as part of a magic show — but rather than reappearing after the trick is finished instead is transformed into a celestial presence hovering over Manhattan, continually haranguing and embarrassing her son. Only when Woody breaks up with his shiksa and ends up with a nice girl of whom mother approves are things made right.

That, and not the more obvious contender, is the circa-1990 movie I couldn’t shake while watching “Honeymoon In Vegas,” the surprisingly entertaining new Broadway musical that opened last night at the Nederlander Theatre. Here, the overbearing Jewish mother isn’t magically embedded in the sky, but she’s still an unwelcome and omnipresent nag, popping up the middle of Tiffany’s and Lombardi’s and a casino floor and a Hawaiian garden to torment her nebbishy son.

Yes, “Honeymoon In Vegas” — with a book by Andrew Bergman, who wrote and directed the Nicolas Cage-Sarah Jessica Parker film, and music and lyrics by Jason Robert Brown, the three-time Tony winner once represented on Broadway with “13,” about a boy forced to move from New York to flyover country mere weeks before his bar mitzvah — is the classic Jewish coming-of-age story of an infantilized man-boy who finally grows a spine and stands up to his mother — who, it turns out, just wanted that for him all along.

The bouncy (if somewhat un-Jason Robert Brown-ily unsubstantial) score plays with the swinging sounds of Las Vegas and the ukulele melodies of Hawaii. The cast — headlined by a hardworking, game, entirely charming, and briefly tap-dancing Tony Danza—is entertaining and talented. Gary Griffin’s direction is floor-show-worthy, busy and emphatic. The design — the fantastic sets are by Anna Louizos and costumes are by Brian Hemesath — is perfectly, garishly opulent. The thing, really, is a Vegas ideal: an entirely successful, entirely unambitious night of singing, dancing, and jokes.

But back to mom. You see, Bea Singer (Nancy Opel), on her deathbed, made her beloved son, Jack, promise that he’d never marry, because no woman would ever love him the way his mother did. (The Norman Batesian undertones are not explored.) As we meet Jack (Rob McClure, superlative as Chaplin two seasons ago and effective here), it’s years later, and he’s in a very happy relationship with a perfect — if pretty clearly goyish — girlfriend, Becky Nolan (Brynn O’Malley). He wants to marry her, he really does, but each time he’s close to proposing the ghost of mothers past appears to scare him out of it. Finally, and at the risk of losing the girl, he makes a bold call: They’ll fly to Vegas and seal the deal that very night.

Until Tony Danza interferes with Jack’s plans. Mr. Danza, in a role and performance built around his persona and his strength (charisma) and weakness (voice) in way that recalled for me nothing so much as Jerry Lewis’s turn as Applegate in Damn Yankees 20 years ago this winter, plays Tommy Korman, a onetime garmento turned professional gambler whose late, beloved wife — there’s a jaunty number about skin cancer, which killed her — was the spitting image of Jack’s Becky. (Ms. O’Malley plays both women, in different wigs.) When Korman spots the betrothed across a hotel lobby, he sets a plan in motion: He invites Jack to a crooked card game; Jack loses $58,000; and Korman makes an offer: debt forgiveness in exchange for a weekend with Becky. At his villa on Kauai. But with no monkey business. Deflated and indebted, Jack agrees. Infuriated, intrigued, and eager to punish Jack, so does Becky.

That’s when Jack realizes he made a terrible mistake, that he’s at real risk of losing this perfect girl for good. And so he finally stops being a schlemiel and decides to head out in chase to fight for his girl, flying to Hawaii, fending off attempted seduction by a cabdriver (on Korman’s payroll, naturally), visiting the Garden of Disappointed Mothers (where mom finally reveals that she just wants him to learn to stand up for himself), and missing Korman and Becky, who are soon enugh on their way back to Vegas, for an impulse-purchase wedding. Desperate to catch them, Jack ends up hitching a ride with what he doesn’t at first realize is a planeload of skydiving Elvises. (Have you tried booking a last-minute flight between two non-hub cities lately?) His only chance is to join the Elvises and skydive in Vegas—which he does, overcoming his fear of heights and, combined with the whole get-the-girl caper, displaying enough steel to finally end the curse. Jack and Becky are married, if not by a rabbi then at least by the head Elvis impersonator.

It’s all silly and goofy and slight, and it all works — not because the show has so much heart but because it has so much top-notch sizzle. And that, not love, is the real point of Las Vegas, isn’t it?

Why ‘Honeymoon in Vegas’ Is Quintessential Jewish Mother Story