‘Conversion’ Is Key to Early Education 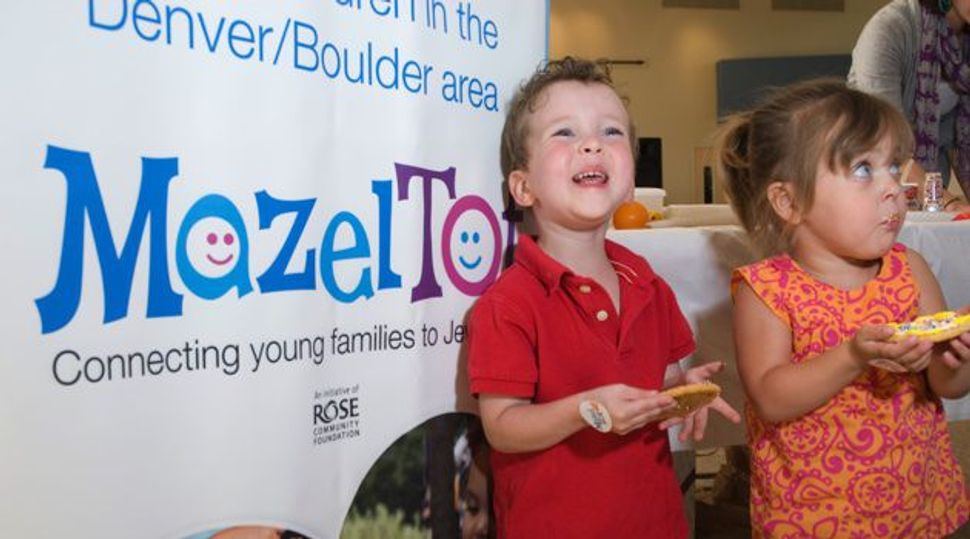 A new effort underway in Denver, backed by a wide-ranging coalition of Jewish organizations, hopes to use modern marketing techniques to increase enrollment at early childhood education centers and, in the process, lure a new generation of young and sometimes leery families back into Jewish life.

The goals of the $810,000 initiative, led by the Denver-based Rose Community Foundation, with support from the Jay & Rose Phillips Family Foundation of Colorado, are at once cultural and economic. Because it takes place year-round and many parents are clamoring for such services, early childhood education has proven to be a huge market, often more lucrative than day school. At the same time, 64% of JCC and synagogue members who have age-eligible children (those who are up to 4 years) do not have their children enrolled in ECE centers.

Trying to solve that problem has, for the first time on a formal project, brought together the national leadership of the Union for Reform Judaism and the JCC Association, along with the United Synagogue of Conservative Judaism. Officials from those groups are hopeful that Denver will yield “best practices” that can be used in Jewish communities in other metropolitan areas. Denver and nearby Boulder have nine ECE centers, out of an estimated 630 nationally.

“I don’t think our Jewish community has valued our young children as much as it could,” said Lisa Farber Miller, Rose’s senior program officer. “In many cases, religious life has focused on the bar and bat mitzvah age, and we just haven’t invested in our early childhood centers.”

The initiative is based on studies showing that 85% of a child’s cognitive development is formed by age 5, the majority by age 3. The preschool years are also the time during which young families forge their own identities and seek the company of families with similar values.

“When you engage with babies when they’re 6 weeks to 6 months old, you have the opportunity to relate with them and influence them that you will never have again,” said Mark Horowitz, vice president early childhood education and family engagement at the JCC Association. “If we don’t also try to form sparks of Jewish living when we have their attention, when we can ask them to do anything, when we can partner with them in ways that will never be possible, we’re missing that opportunity.” 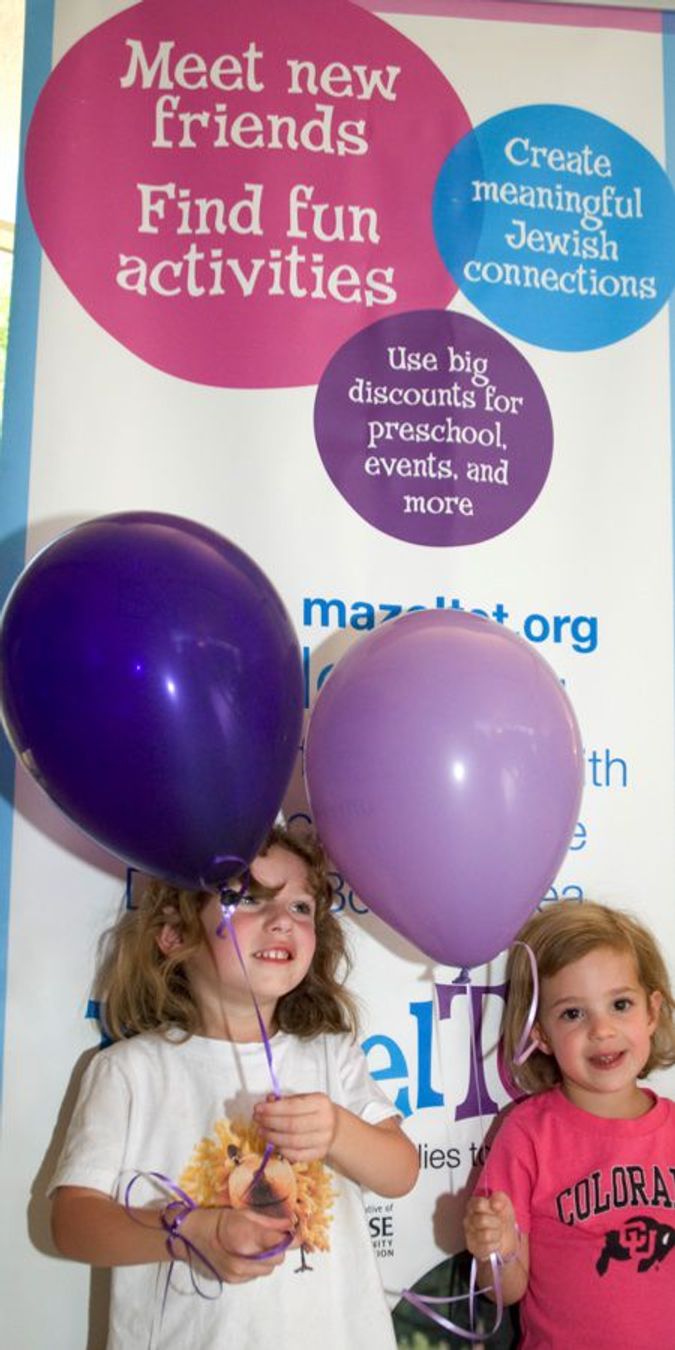 The first phase of the initiative began in July 2014 with two Reform synagogues and two JCCs. The second phase will start in July of this year with five other synagogues, including two Conservative synagogues. Horowitz and Cathy Rolland, who runs the early childhood education and family engagement initiatives for the Union for Reform Judaism, are serving as mentors and coaches for the two JCCs and two Reform congregations in the Denver and Boulder areas, respectively. In addition to being in regular contact with the centers, Horowitz and Rolland travel to Colorado every six to eight weeks. The time commitment — in addition to those in Denver, Horowitz alone is responsible for 145 schools in the U.S. and Canada — is indicative of the promise national organizations see in the Denver experiment.

At first blush, the Denver prescription appears straightforward. It is about introducing sometimes-foreign concepts like branding to organizations whose chief expertise is religious and educational. The focus is now on “conversion” — but the marketing, not the religious kind. It’s about getting people through the door and turning them into paying, enrolling customers.

A 2012 economic study urged Denver Jewish organizations to “break down institutional silos,” and warned that many families using ECE centers are “not fully embraced by the JCC or synagogue and as a result, do not feel connected nor are they considering becoming members.” The study also found that if the centers operated at “best practice” standards, the revenues of their congregations as well as those of the JCCs would increase $720,000 annually, an average of 11% per institution. The study said that the centers needed to focus on “creating inclusive relationships with members while aggressively communicating all that the synagogue or JCC offers to families.”

Typically, ECE directors spring from the classroom and have little experience in the world of business. Historically, enrollment in the centers has been driven by word-of-mouth.

“There were no parent ambassador programs, where interested families got a follow-up call from a parent with children the same age,” Farber Miller said. “There was no systematic way to manage inquiries. The school visit is critically important and our directors really want and need help in creating an excellent school visit for a parent. There are horror stories about what some of the school visits looked like because the directors weren’t prepared to give the kind of school visit they’d like to give.”

In addition to coaching, training and guidance from the national organizations, local centers participating in the initiative will receive a “toolbox of resources” that include new software and database support to improve marketing, tracking and enrollment, as well as help with their websites and social media. These services and tools provided by the program are valued at $92,000 per institution.

The initiative builds on previous efforts in Denver that offered scholarships for children in pre-K. Another aim of the initiative is to expand the use of Rose-funded MazelTot, a website that connects young parents and provides discounts on family related services, as a hub for young Jewish families to learn more about pre-K institutions.

The initiative has forced the various centers into sometimes uncomfortable discussions about “market segmentation” — in other words, what they do well and what they don’t.

“We shouldn’t all look alike,” Horowitz said. “We can’t do everything the best, which is why there’s more than one school. We need to begin to talk about each other’s programs, and focus on helping the people in front of us rather than seeing everything as competition.”

To get to that place, the centers essentially agreed to open their books to an outside auditing firm. At the time of the 2012 study, area synagogues did not know how many eligible pre-K children they had in their membership. Now, they will have access to Child Care CRM, a web-based software program designed to boost enrollment.

“If a parent does an online inquiry, it goes directly into this database,” Farber Miller said. “When the director arrives in the morning, that inquiry pops up. We call the parent. They populate the database, including the ages of all the children in the family… It even records that there’s a 1-month-old. When that 1-month-old becomes 12 months old and is ready for the early toddler class, it sends a reminder for the director to call the mom about that child.”

The software immediately monetizes the value of the relationship with a particular family. It calculates the lifetime revenue a family might bring to the synagogue or JCC. When they exit, it calculates the loss. “These are common business practices in the secular world, but are not present in our Jewish community,” Farber Miller said.

Rolland, of the URJ, said other Jewish communities have begun to take note of what is happening in Denver. She said she’s received interest in some of the early findings from groups in Boston, Los Angeles and Washington, D.C., and recently returned from a trip to Chicago, which is beginning to implement a similar program.

The Denver initiative is “changing the landscape” of the field, she said. Typically, her experiences with family engagement amount to visiting schools to teach them about model practices. Denver, by contrast, has asked each of its institutions to create its own “standards of excellence” based on their strengths and to determine what it would take to become exemplary in each category. The practices and results vary from center to center.

“We’ve absolutely flipped this on its head,” she said. “We’re meeting people where they are, not where we’d like them to be.”

The goal is not only to provide young families with more options, but also to create a more consistently welcoming community for those seeking to raise Jewish children. For the Denver area, initially, and beyond, whenever a couple has a baby, they should now be visited by a volunteer with a welcome basket that includes information about available resources. Families new to Denver should be invited to Shabbat with families with children of similar ages. In general, the centers are hoping to become more hospitable to parents seeking to form friendships with those of similar values.

“People are busier,” Horowitz said. “People may be just beginning to think about Judaism again as they have young children. We have to give them ways to do that that are easy for them, that are nonjudgmental, and that fit their needs.”

Paul Gillis, a member of the leadership team for the early childhood center at Denver’s JCC, said his efforts stem from experiences with the center when his own children were toddlers. He called the friendships and deeper connection to Jewish life that formed there “transformational.” The initiative has only made that process richer, he said. He specifically cited a month-long community-wide Shabbat program in which one family in every classroom hosted Shabbat meals in their home for all the families and teachers in their class.

“The opportunities for family engagement are now broader and deeper than when my children were enrolled,” he said. “At first, I observed that that the classrooms were relatively closed to parents. The teachers were anxious to get on with the work of the day and parents were not especially welcome or encouraged to stick around. This was somewhat frustrating for young parents who were eager to participate and who wanted more insight into the classroom activities. Now, the classrooms are much more open and inviting, and there are shared learning opportunities for all members of the family.”

Andrew Brownstein is a freelance education writer living in the Washington, D.C. area.

‘Conversion’ Is Key to Early Education