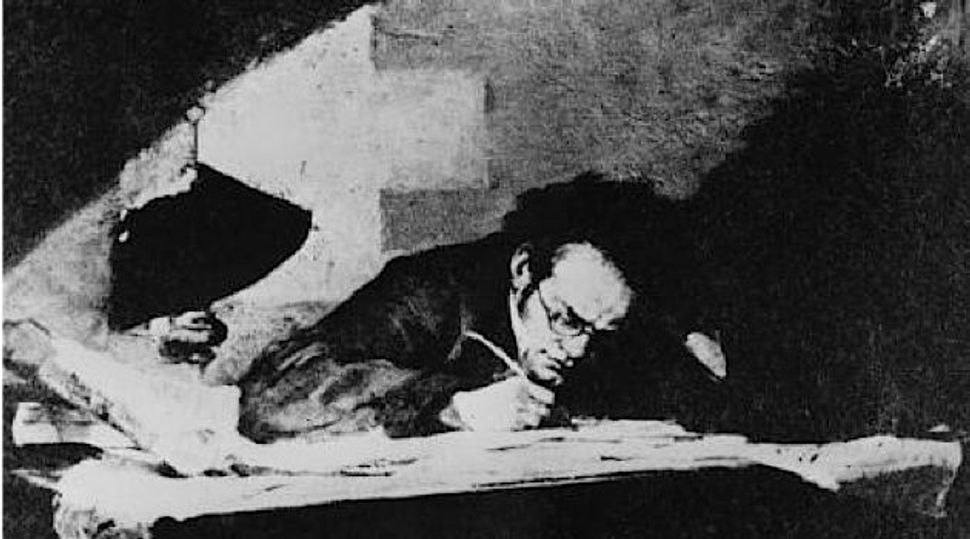 Lieder of the Pack: A few months before he died at the age of 31, Schubert produced a setting for the 92nd Psalm. Image by Getty images

A few months before he died in 1828 at the age of 31, Franz Schubert produced a setting of the 92nd Psalm, Tov Lehodot La’Adonai. Yet, as Graham Johnson asks in his massive new compendium about the Austrian composer, “How many people even know that Schubert wrote a Psalm setting in Hebrew?” This question, among others, is explored in Graham Johnson’s massive compendium about the composer.

As Joshua R. Jacobson, an authority on Jewish choral music noted, Schubert was, in fact, the “only great composer before the twentieth century to compose a setting in Hebrew of the liturgy for the synagogue.” Schubert was commissioned along with other contemporary composers by Salomon Sulzer, a hazan and influential composer widely admired for his baritone voice, who reigned over the cantorial art at Vienna’s Seitenstettengasse Temple for 45 years, starting in 1826.

A work for solo baritone and chorus, Schubert’s Psalm was clearly intended to showcase Sulzer’s artistry. Schubert might have fulfilled the commission by writing music to a German translation, but he elected to work with the Hebrew language. Sulzer himself was a noted composer (among his still-familiar settings are Ein Kamocha, Yehalelu Es Shem, and Shema Yisroel) and editor of liturgical music, and cared deeply about Hebrew language prosody. As the musicologist Elaine Brody observed in “Schubert Studies”: “Sulzer was meticulous in his text-setting; he must have advised Schubert on these matters.”

The resulting Psalm sounds quintessentially Schubertian, with all the clear, direct, quasi-folklike tunefulness and apparent naïveté that have made the composer’s melodies so well loved worldwide. Johnson claims that the “music is tinged with a trace of what might be termed ‘Middle-Eastern exoticism.’” Brody, however, disagrees: “Stylistically [the Psalm] resembles church music more than synagogue music; it displays no characteristic Hebrew melody.” The musicologist Lily E. Hirsch, author of “A Jewish Orchestra in Nazi Germany: Musical Politics and the Berlin Jewish Culture League,” sides with Brody, opining that the Psalm “itself does not show characteristics commonly found in music considered Jewish. Rather, it is homophonic and harmonically simple, typical aspects of some of Schubert’s part-songs.”

Schubert did not stop there with compositions indicating a close identification with the Jewish people. The same year he also composed “Miriam’s Victory Song,” setting a poem inspired by the book of Exodus in which Aaron’s sister exults over the drowning of Pharaoh’s army in the Red Sea. Johnson notes that this “Victory Song,” for soprano soloist, chorus and piano, is a rip-roaring “biblical epic worthy of Cecil B. de Mille.” More to the point, Franz Liszt, in his book “Gypsies and Their Music in Hungary,” included paeans of praise for Sulzer, not just as a singer but also as a charismatic personality. Sulzer “sometimes speaks,” Liszt wrote, “as if after having squared off sections of stone to build the pyramids, he had seen darkness in Egypt and the ungodly Pharaoh engulfed by its waters.”

For Liszt, Sulzer was like an eyewitness to the events celebrated in “Miriam’s Victory Song,” as set by Schubert in the same year he wrote his Psalm 92. Liszt was transfixed by the experience of attending a service at Sulzer’s synagogue: “As the Hebrew words were pronounced, one might have said they were dark flowers separating from their stems and shedding their vibrating petals and sonorous corolla.”

Likewise, in 1834, the German Catholic composer Joseph Mainzer wrote in the Gazette Musicale de Paris about Sulzer’s music-making around 1827, when Schubert was likeliest to have heard him. Mainzer noted that no Viennese church of the time ever offered singing “as noble and lofty as that synagogue.”

Johnson is on thinner ice when he claims that Schubert’s choice to set poems by Heinrich Heine for his so-called “Schwanengesang” (“Swan Song”) was likewise a philo-Semitic act, since Heine was “known, nay notorious in more conservative Austrian circles, for being both Jewish and anti-establishment.” Heine had converted to Christianity in 1825 and none of the poems in “Schwanengesang” relate to Judaism in any way.

To find anything more profoundly implicated in Jewish tradition among Schubert’s works, one would have to go back to the beginning of his composing career, when at age 14 he created his first surviving vocal work. The intense “Hagar’s Lament” sets a poem about the book of Genesis tale of the handmaid who bears a son, Ishmael, out of wedlock to Abraham. During one of Hagar’s exiles in the wilderness, she suffers from lack of water and dramatically calls for the intervention of the Almighty: “Look down upon us, Jehovah!” Johnson calls the musical effect “gigantic, like a religious canvas by Tiepolo.”

Because of Schubert’s collaborative ties to Sulzer and such works, it is small wonder that over a century later, German Jews still considered him a beloved friend. Schubert’s Psalm and “Victory Song” were performed by the Berlin Jewish Culture League in the 1930s as encouragement to the Jewish community after the Nazis took over. The Canadian-born musicologist Rita Steblin has pointed out that an early painted portrait of Schubert, now in the Vienna Kunsthistorisches Museum, was long denied by Austrian art historians to be Schubert “because of the Jewish-looking features.”

Frank Ruppert, a Washington, D.C. real estate agent and ex-priest, authored 2009’s “Franz Schubert and the Mysterium Magnum,” which claims affinities between Schubert and Jewish mysticism. Of all these floated or substantiated identifications, in 1942 the German anti-Nazi musician Fritz Busch said it best in The New York Times. Busch explained why he was participating in a choral festival sponsored by Temple Emanu-El of New York, directed by the Russian Jewish musician Lazare Saminsky:

In joining my work with that of a Jewish fellow-musician, Lazare Saminsky, director of the festival, and in trying thus to help in the fostering of cultural comradeship and amity among creeds and races, I am not doing anything new: I merely follow in the footsteps of a very great and a very lovable German musician, Franz Schubert. A hundred years ago, in another sinister period of history full of strife between creeds and nations, Schubert, German and Christian as could be, carried his high-minded friendliness so far as to compose a choral work to Hebrew words for the synagogal service of his friend, the famous cantor, Salomon Sulzer of Vienna. It is published in Sulzer’s collection and is used by the Jewish people the world over as their own. This is what Schubert did. I am happy to follow his example.