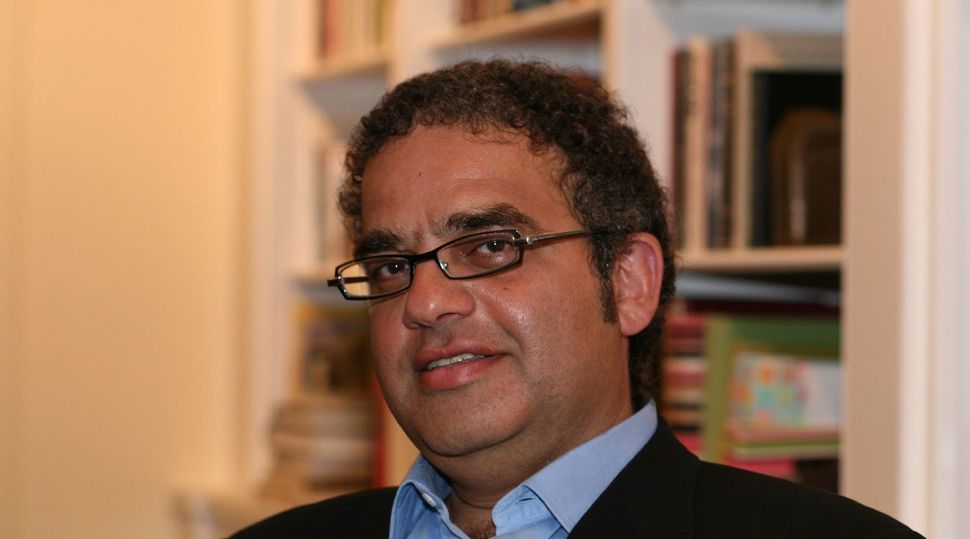 Prize-Winner: Ruby Namdar’s “Ruined House’ takes place both in 2000 New York and at the Holy Temple in Jerusalem. Image by Courtesy of Ruby Namdar

I met Reuven “Ruby” Namdar on November 11, 2014 in New York, because I was writing a long piece about writers who live outside Israel and write in Hebrew. It turned out, by coincidence, that a few hours before our meeting he had gotten the biggest news of his career. He had been informed that he was on the short list for Israel’s Sapir Prize. The literary prize, administered by the Israeli lottery with funds from its coffers, is set up along the model of England’s Booker Prize with a long list of twelve in November, a short list of five in December and a televised awards ceremony at the end of January where the winner is announced.

One of the first things that Namdar said to me about “The Ruined House” — the novel which he ultimately won the prize for — was that he joked to his wife during the decade of its writing that it would be a “masterpiece.” As it turned out, the first review of it concurred, using that very word he had hoped for.

The Forward had a chance to catch up with him by Skype the evening before (January 25) and the evening after (January 26) the prize ceremony. The night before the ceremony, when he did not know whether he had won or not, he told me that he was proud to be on the short list “despite the fact that I am not here all the time hobnobbing.” He did say that winning would be an “incredible affirmation” and that “the fact that I am being recognized in such a way is immensely important for an artist and a writer” since “we don’t have very tangible rewards.” He added that the win would be “meaningful, more than people would like to admit.”

And after the ceremony where he learned that he had won?

Beth Kissileff: So we had spoken a good deal about whether the judges would be willing to give you the prize even if you deserved it because, though others who live and write outside Israel like Maya Arad, have been nominated, no one has won. But you did. What has the reaction been?

Ruby Namdar: It turned out to be a neutral and transparent issue much to my happiness. Nobody referred to it.

BK: How did you feel when you realized you had won?

RN: I was stunned. At a certain point they trained the camera on Carolyn (his wife) and me, but I thought, “it can’t be.” And when he [Uzzi Dayan the announcer of the winner] said ‘Reuven’ I felt like it is not happening. I felt like I am in a weird dream, very exciting. This is a huge deal here, as big as winning the Booker (England’s Man Booker Prize, the largest English language literary prize).

BK: Can you tell English readers who don’t know your writing a bit about this novel? That way we can get excited for the translation since the prize is not only monetary; it awards a translation of the writer’s novel into Arabic and into another language of the writer’s choosing, which in most cases is English.

RN: It is the first Hebrew American novel in many, many decades. It is a Jewish American tale told only the way an Israeli could tell it. It is an unusual story. It takes place in New York fourteen years ago, but it jumps between New York of 2000 and the Holy Temple in Jerusalem. It tells of a year in the life of a college professor who lives in New York, is successful and elegant and has a severe midlife crisis. He has visions of the Holy Temple in Jerusalem without knowing what he is seeing and without having the interpretive tools to cope with his visions. It is a very unusual novel and I am proud that the judges recognized it. They were very brave and independent minded.

BK: Can you talk a bit about the writing process?

RN: At times euphoric and wonderful, and at times excruciating! It was like “The Old Man and the Sea,” but I did not know if I could bring this big fish home. It is a half miracle that I managed to eventually bring it in, and then to have this kind of recognition is unbelievable!

BK: Tell us a bit about living in New York and writing in Hebrew.

RN: Life in New York could have become a problem but I made the most of the situation. I condensed my intense American experience into this book. I use my pleasant culture shock and my fascination with this new world of New York, American Jews, non-Jews, and Americana. This is my Jewish American book written in rich contemporary and ancient Israeli Hebrew.

BK: Can you talk about living in English and writing in Hebrew?

RN: I celebrate the Hebrew because I live in English. Hebrew became for me a holy language, festive. The fact that I live in English makes me more aware of my love of Hebrew and more deliberate in my use of Hebrew. I can no longer take the language for granted. In some ways being an ex-pat writer is a gift for a writer. But you have to work hard to preserve the purity and vitality of your language and not allow it to deteriorate and be eroded by the English every day.For example when I first dreamed in English I caught myself. It was a great shock to my system. I stopped reading in English since then. I have to keep the inner sanctuary pure, the Hebrew sanctuary within.

BK: Anything you want to say to your friends and neighbors in New York now?

RN: I am going to say to them that I hope they survive the blizzard. It is so weird to think of our block in the blizzard, and Riverside Park with being here in Tel Aviv by the ocean. I honestly cannot wait for the translation of this novel to come out in English so I can share this novel with those I love and live with, and my wife and daughters are not excluded from that, let alone all my friends.