In Angouleme, Israeli Cartoonists Talk About Charlie Hebdo — And BDS 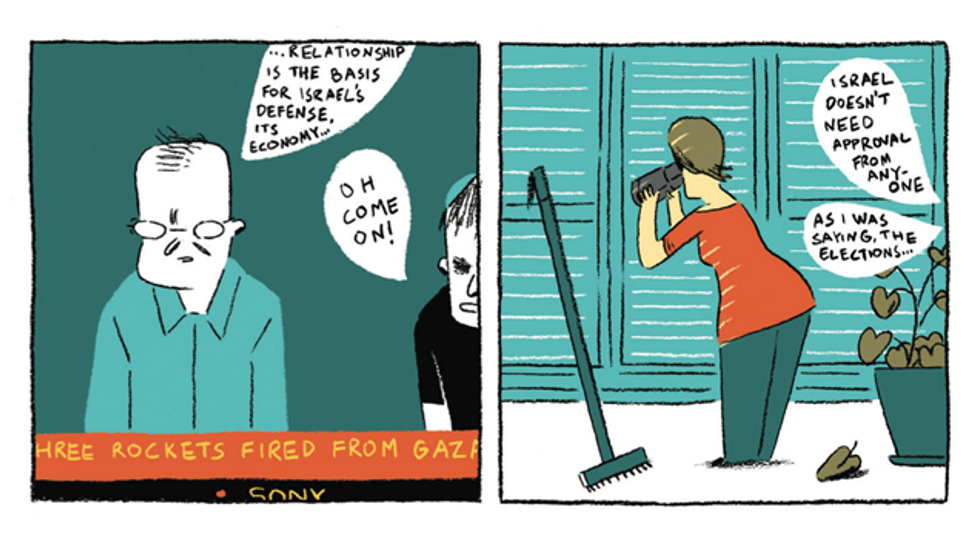 The International Comics Festival opens this weekend in Angouleme, France. Just like last year, SodaStream is one of backers of the festival. And once again, another petition to boycott, divest from and sanction Israel has popped up, calling on the festival’s organizers to refuse any funding and cooperation with Israeli companies. Last year, BDS’s main beef was with SodaStream’s factory in the Palestinian territories. However, now that the company has suspended operations in the West Bank, the organizers of the petition seem to be using the recent tragic Charlie Hebdo attacks as a way to further their cause, as the text of the petition letter shows:

“These horrific acts of violence compel us to act even more urgently for a world where the dignity, freedom, and equality of all people are respected and promoted. We reaffirm that the Palestinian boycott movement is one important step towards that vision, and we hope that you will continue to join us in this movement.”

Signed by over 90 cartoonist, the petition includes some of the most famous names in contemporary comics, Alison Bechdel (“Fun Home”), Kate Beaton (“Hark A Vagrant”), Ben Katchor (“The Jew of New York”), Peter Kuper (“Spy vs. Spy”), Jaime Hernandez and many more influential cartoonists from around the world.

Each one of the five stories in Humdrum’s anthology is based on the house in which its author grew up. Despite not having any clear political agenda, these comics are extremely Israeli. They illustrate a chain of violence, sometime extremely subtle, that underlies the Israeli experience.

Omer Hoffman’s recounts the banal daily routine of a secret agent. Keren Katz’s story of a “humdrum” walk home relays an anecdote from growing up in Holland and pretending all her neighbors are Nazis. There’s also Hila Noam’s harrowing story of a conflict between two groups of kids on the abandoned Israeli roads during Yom Kippur that ends in tragedy. Hadar Reuven tells a story of memories from the building she grew up through the generation of four men. Dan Allon’s story is about flashbacks to his service as the assistant of commander of the Kziot Prison (a prison of political detainees).

I got on Skype to talk with Humdrum’s five creators.

Lior Zaltzman: So I wanted to talk politics a little. I wanted to talk about this BDS petition, but also about Charlie Hebdo and how it affected you. I personally got upset every time after Charlie Hebdo when I felt that people were hijacking the magazine and saying that it would support this or that without knowing anything about the publication or its voice. But I guess my question is, do you feel like this affects you as creators and specifically Israeli creators?

Omer: For me this is a very charged situation. I identify myself as a left wing supporter and, on the one hand, I understand the use of a boycott and of this specific boycott. On the other hand, BDS causes a kind of discomfort I don’t know how to deal with. The boycotts that we’re involved in as Israelis don’t go very deep (like, not buying products from settlements). A big Boycott boycott like this one feels very strange. The feeling of being a foreigner is suddenly sharper, and it sharpens your Jewish identity which is a thing that I don’t really feel in Israel on a daily basis.

Hadar: I relate to that, but to me, this situation emphasizes that it doesn’t matter who I am or what my politics are, the world sees me in a way that I can’t really control. It’s kind of like, “Did I choose to be born where I was born?”

Hadar: Making an impact on a political situation is great, but it’s hard not to take it personally. We’re artists. It’s difficult because, even in our comics, we’re expressing opinions. We ask, “if the lone, little, everyday person wants to create change, what does can he or she do?” And artists can impact change with what they do and what they say in their art. I think that’s what we do, or we’re trying to do. So, yes, it does feel personal. 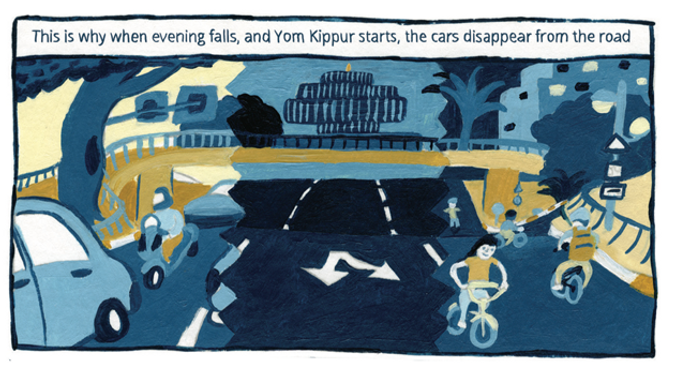 A culture clash on Yom Kippur Image by Hila Noam

Keren: But there’s also another question. In theory, Israel is democratic country, so we have the possibility and responsibility to create change as citizens. So my question is, as artists, is responsibility doubled? As both artists and citizens, do we have to present a political opinion? Are we representing Israel or just ourselves? And if it’s just the latter, are we shirking our responsibility? It’s this kind of question that really clashes with my aim as an artist, which is to tell a story. So yes, you could say I’m pretty stressed out.

Omer: It’s going to be interesting.

Hila: There’s something about the boycott letter. When they wrote about it in Ha’Aretz, for example, it seemed like the petition was against Israeli cartoonists, which it isn’t. It’s against institutions and companies. It’s just another way to create pressure. But it is off-putting.

Keren: I just wanted to quote Eran Hadas, who explains politics to me: “a Boycott is the least left-wing tool in existence. It’s extremely violent. It’s forcing your opinion on someone through financial means, and it means that if you use a boycott politically you can also use it financially. And closing the factory in the territories caused Palestinians to lose jobs, too.

Hadar: To me it’s really important to say that no matter how left-wing we are, we still live in this country.

Dan: —Only because I can’t get a foreign passport! (laughs) 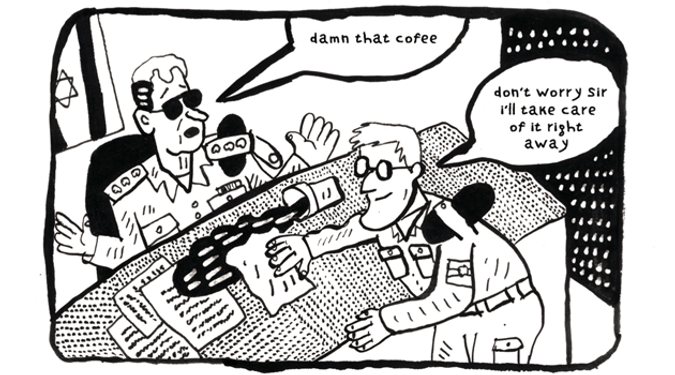 Keren: But is it our right as artists to not be political and not to try to make things better for the Palestinians with our art? Or can we just choose to just come to Angouleme as artists, individuals?

Keren: But whenever you meet people, those are the expectations. I consider myself a-political and I was really hurt when I first read letter. I saw it as being against Israeli artists and was upset to see the signatures of so many people people I know from the New York cartooning scene. With Charlie Hebdo, too, it was really shocking, because it was suddenly so personal. 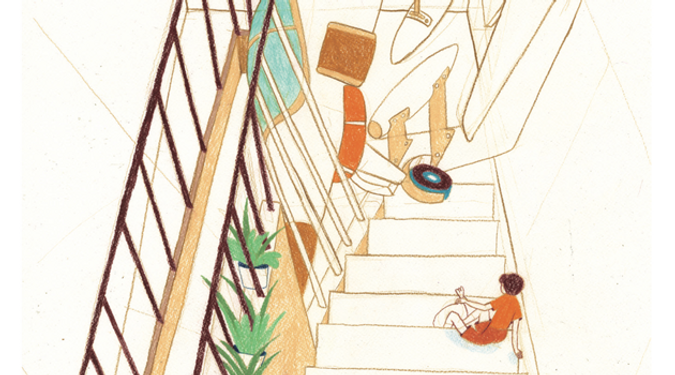 A love story about a walk home Image by Keren Katz

Hila: Charlie Hebdo shocked me too. And I wondered if something like that could have happened in Israel?

Omer: Something like Baruch Goldstein [a Jew who killed Muslims at prayer in Hebron]?

Omer: I disagree. I think there’s a lot of violence against free speech in Israel, from the right wing and especially some of the things that happened last summer [in the wake of the Gaza war].

Hila: You’re right, I guess then it feels a lot more possible here. That was really shocking, that did hit close to home.

Dan: And that’s maybe my problem with the way the French reacted to this. To me, Charlie Hebdo might have stood for freedom of speech, but it was involved in violence against Muslims. I think that in 2015 we’re allowed to be offended by things without being called primitive. It doesn’t justify the murder, of course! But I think in France people were trying to wash their hands of that correlation.

LZ: Yeah I think I’ve heard people say that… How violent it is to actually make fun of the prophet Mohammed.

Dan: Yeah. France colonized almost all of North Africa and wreaked havoc there. Now they treat immigrants from those former colonies like…

Dan: Yes, it’s totally related, everything is related… If a group of people are marginalized then these kind of things they happen.

LZ: Well, yeah and an unfortunate byproduct is that the French extreme right wing party like the Front Nationale is getting stronger.

Dan: Well, my opinion about BDS? Real quick. I think those who reject and criticize the game are participating in the game. That’s it. 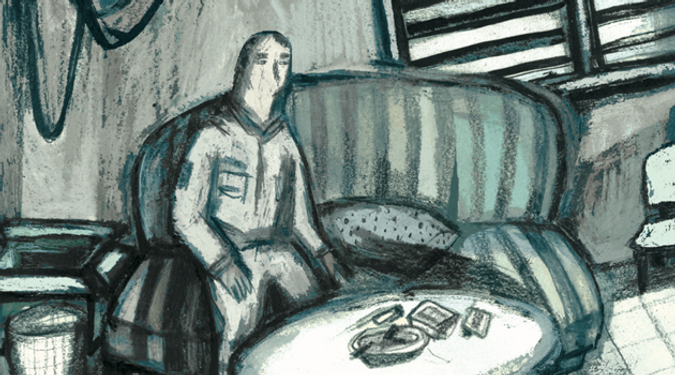 Hila: I just wanted as an aside to say that I understand the boycott, even though I don’t agree with it.

Keren: And I think if I wasn’t Israeli, I might have signed it, you know?

LZ: Yes, I have these thoughts sometimes too… This feels so therapeutic to have you guys say the things that I was wrestling with in my head out loud.

Keren: You know, Amitai Sandy, an Israeli cartoonist, also signed the petition, and that’s something that I don’t understand. I mean, we understand the complexities of our reality more than these people on the outside. If you want to live normally, then you can’t think of your life as an act of violence. It’s absurd, but that’s the way the world sees us.

LZ: So I guess Humdrum’s comics aren’t political? I mean my point of reference is someone like Eli Valley or Joe Sacco…

Keren: It took me a long time to be able to read Joe Sacco. Eli Valley and Joe Sacco’s comics are super realistic. But, in my opinion, the journalistic lens isn’t what we do or know. That’s not our aim. We just want to create stories. It’s the movie you made about that thing that happened a year ago, not the article you wrote about the thing that happened yesterday.

Dan: Realistic drawing wants to describe the thing that happened. Humdrum’s comics don’t have that kind of pretense. I think this is what makes it a-political. The realistic comic is like, recruited.

Hila: I think to me, we all have politics in what we do. Our comics anthology doesn’t tell you how to think, they don’t manipulate you. Instead, they let you discover the complexities of Israel life through our personal experiences.

In Angouleme, Israeli Cartoonists Talk About Charlie Hebdo — And BDS