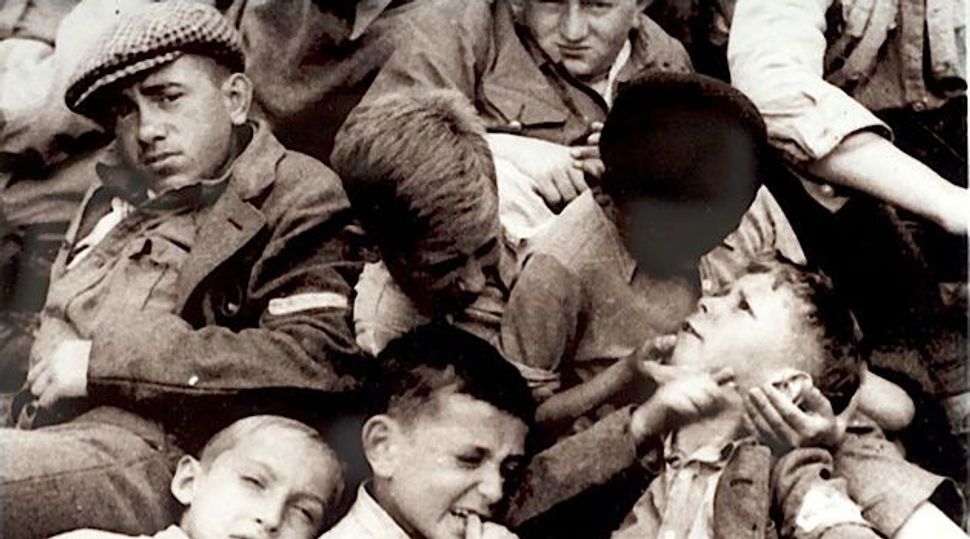 After the Liberation: Between 600 to 900 boys were saved and secreted away by Buchenwald’s underground resistance. Image by OSE/CDJC Mémorial de la Shoah

The black-and-white photos on display couldn’t be more different.

There’s Izio Rosenman, a young boy, held by his mother at a family picnic. Next to this 1937 photo we see Izio in a hammock with his two sisters. He seems content.

In the other photo, Janek Szlajtsztajn and David Perlmutter sit behind the barbed wire of the Buchenwald concentration camp. They look forlorn, and their young eyes appear dulled.

And then, in a third photo, this one from 1945, Israel Meir Lau, 8, stands sidelong to the camera, a coat over one arm, a suitcase in his other hand and a smile on his face. He is recently liberated, and there’s hope in his eyes as he starts his journey to Palestine.

It was this hope that compelled Lehrhaus Judaica, a Jewish adult education organization based in Berkeley, California-, to help bring this “Alive! A la Vie!” photo exhibit and lecture series on the saved children of Buchenwald to the San Francisco Public Library. 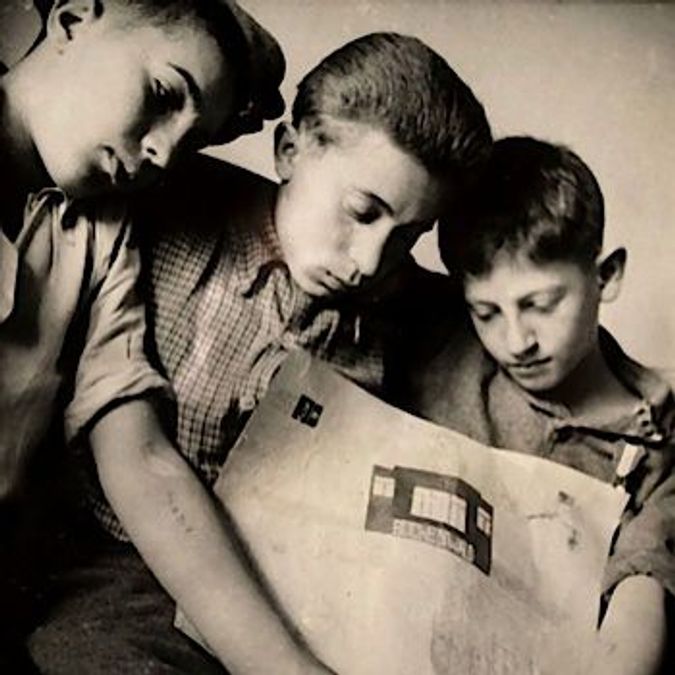 The exhibit, which has been displayed in Paris and Jerusalem but never before in the United States, recounts how the 600 to 900 “Buchenwald boys” were secreted away — many of them in one remote, windowless barracks — by the camp’s underground resistance. These adult protectors managed to shield the boys from the guards’ gaze and wrath, and to hide the children from being sent to forced labor. They also gave them extra food rations and encouragement and even tutored them.

The exhibit also includes photos of the clothes the boys wore, the coupons they exchanged for meals, the bowls from which they ate and some simple drawings of the cruel environment that had become their home.

After American troops liberated the camp in April 1945, the French Jewish humanitarian group Oeuvre de Secours aux Enfant (which created the exhibit) escorted hundreds of these boys to France, Switzerland and England. Almost half of them went to Ecouis, a camp in Normandy. Of those, about half were later reunited with surviving family members.

Those boys who rededicated themselves to religious studies were sent to Ambloy, in central France, where OSE ran a home for Orthodox Jewish children, among them, Elie Wiesel. Others immigrated to Palestine, including Lau, who would grow up to become the Ashkenazi chief rabbi of Israel.

“Many of [the boys] really did a lot with their lives after the war, and so that in itself is really so inspirational,” said Fred Rosenbaum, Lehrhaus’s founding director.

Yet Rosenbaum had “one of the most emotional experiences” of his long career in Holocaust studies at the exhibit’s opening night, when he met Tom Szelenyi, another teenage survivor of Buchenwald. Lehrhaus Judaica had toiled unsuccessfully to find a Buchenwald survivor to speak at the event, and then Szelenyi just showed up out of the blue.

Szelenyi, who came from a Jewish upper-middle-class family in Budapest, was 16 when he was deported to Buchenwald in 1944. His father had been taken elsewhere a year earlier; his mother was left behind.

While other camps’ gates carried the slogan “Arbeit macht frei” (“Work Makes You Free”), Buchenwald’s read “Jedem das Seine” (“To Each His Own”). “I was a 16-year-old naive kid who fell for that — not for very long, maybe a day or two,” said Szelenyi, now 86 and living in San Mateo, California. “I knew something about the German mentality — or I thought I did — and I thought, ‘I’ll be okay.’”

He soon encountered the cruel reality of the camp: He wore the striped pajamalike uniform emblazoned with his number, 97198, which he now wears on a gold bracelet. He wasn’t hidden away by the resistance as some of the younger children had been, so he was treated like the other inmates: Twice a day he stood in the freezing cold for roll call. He shared a bunk with two or three others. He did hard labor. He had lice. He starved.

Szelenyi spent only a few months in Buchenwald before he was sent to Colditz, near Leipzig, to build a munitions factory together with a few hundred other relatively able-bodied prisoners. The work and starvation were no better, Szelenyi said, but at least the prisoners had their own bunks.

As the Allies closed in, the German guards forced their captives on a “death march” out of Colditz, which claimed many more lives. Eventually, as the prisoners came close to the Czech border, the guards fled altogether. Szelenyi crossed, only to be caught and brought to the Theresienstadt concentration camp, which at that time was still under German control. “Thank God, 10 days later the Russians came,” he said.

Szelenyi was free — but amid chaos: The Russians gave the liberated, emaciated prisoners virtually unlimited food, which sickened many and killed some. They also handed out arms and told them to take whatever they needed from the local populace, and therefore many commandeered any bicycle, car or wagon they could find.

“In the camp, all we wanted to do was eat something and go home,” Szelenyi said.

So he boarded a train back to Budapest, to find that his mother had survived in the ghetto. His mother’s first reaction? To get rid of his lice. “She immediately sat me in a tub of petroleum and took my clothes and burned them,” Szelenyi said. “I lost so much weight that all I was sitting on was bones, and that hurt, but she made me sit and wash myself.”

He regained strength thanks to an American-run soup kitchen, where he also worked. As Soviet communism increased its influence in Hungary (eventually establishing the communist People’s Republic of Hungary in 1949), Szelenyi made his way to Austria and then to Germany, where he found work as an American officer’s interpreter and driver.

In 1948 Szelenyi immigrated to the United States, which, he admitted, had been his goal since he was a young boy pretending to be a cowboy and watching Mickey Rooney and Judy Garland on the silver screen. Arriving penniless in New York, he took odd jobs — truck loader, clerk, laundry van driver — before working his way up through the ranks at Warner Bros. When he ran the studio’s San Francisco office, he brought his mother to live with him in San Francisco. He met his wife there, and later switched to working in the transportation industry. Szelenyi said he never stopped to think how his life might have differed if he had returned to Budapest to find his mother gone, his family ties severed and himself adrift in the world, as befell many of the orphaned boys of Buchenwald.

According to Fred Rosenbaum, this exhibit “really humanizes them by showing their lives before the Holocaust and what happened to them afterward.”