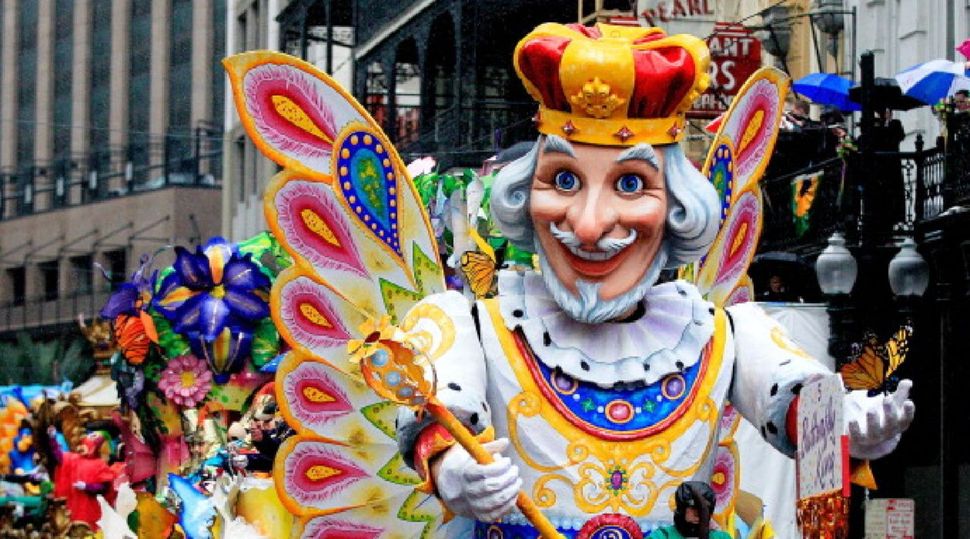 He Loves a Parade: A Fat Tuesday float rumbles down St. Charles Avenue in New Orleans. Image by Getty Images

At first glance, Mardi Gras — the New Orleans version of the worldwide Carnival celebrations — seems anything but Jewish. Its quintessential elements, including public masquerade, the imbibing of copious amounts of alcoholic beverages, and second-line parade music aren’t stereotypical territory for the people of the book, outside of a few bar mitzvah parties that went on way too long.

On second glance, however, Mardi Gras — which takes place this year (2020) on February 25 — takes on a different cast. A Jewish one.

For one, there is the holiday’s proximity in the calendar to the Jewish festival of Purim. And just as Easter has elements of Passover, and Christmas is basically Hanukkah 2.0, so too does Mardi Gras resemble Purim in more ways than one.

In fact, masquerading, drinking, making noise and all sorts of revelry are essential elements of Purim, one of the only days of the year when Jews are actually encouraged to party like it’s 1999. It’s an upside-down day, much like Mardi Gras, when men dress up as women and vice versa, when the meek are encouraged to be rowdy, when adults are supposed to act like kids, and when you are encouraged to poke fun at sacred cows (to mix a cultural metaphor, which seems appropriate in this case).

Purim of course has its serious legal obligations: Jews are required to hear the public reading of every word of the Megillat Esther, or the Book of Esther. But at the same time, by custom they are urged to interrupt the reading with cheers and boos, noise and music. Every time the name of the evil Haman is read, it is to be blotted out with graggers and kazoos and other noisemakers, which, if you think about it, could be the prototype instruments of New Orleans jazz. And by the end of the reading, according to the Talmud, you are supposed to have drunk enough schnapps such that you cannot tell the difference between “cursed be Haman” and “blessed be Mordechai,” which a scientific survey found to be equal to the exact level of drunkenness of the average Mardi Gras reveler.

New Orleans’s Mardi Gras celebrations date back to the early 19th century. By mid-century, social organizations, or “krewes,” had begun to form. They were men’s social clubs, like the Temple Brotherhood, that adopted mythologies, secret handshakes, and themes for their costumes. One such organization was Rex, whose king also acts as the official King of Carnival. The first such man thusly honored with the title “Rex” was Louis Solomon in 1872. Solomon, a prominent Jewish businessman, is said to have been a descendant of Haym Salomon, the financier of the American Revolution.

After the Civil War, things got worse for the Jews along with other victims of racial and religious prejudice. With the rise of Jim Crow and anti-immigrant sentiment in the early 20th century, Jews as well as blacks were banned from most of the New Orleans krewes.

Eventually blacks and Jews formed their own krewes. The first African-American krewe, Zulu, was founded in 1909, although its Mardi Gras parade route was confined to black neighborhoods well into the 1960s. Zulu’s approach was a Purim-like grotesquerie, in which participants appropriated the very look and behavior attributed to them by racist Southerners as a kind of mockery or send-up. They dressed according to the worst portrayals of the “savage” African, they wore blackface, and they handed out coconuts and spears to the crowd.

It was supposedly the sight of this cultural subversion in action, as well as the sound of a marching band playing klezmer — the New Orleans Klezmer Allstars — that inspired a young Jewish newcomer to New Orleans named L.J. Goldstein to form the modern-day Krewe du Jieux in 1995. And like the Zulus, they appropriated anti-Semitic iconography for their costumes, wearing fake hooked noses and horns, dressed as bankers and lawyers, and built a float that promoted the “Jieux World Order.” Instead of coconuts, they threw bagels.

And just as the establishment of the first synagogue in town eventually must lead to the establishment of a second, in order that Jews have a place in which they won’t set foot, so too did a group of members split off from the Krewe du Jieux in order to form the Krewe du Mishigas, bringing the secret Jewish history of Mardi Gras to its ultimate and perfect conclusion.

Seth Rogovoy frequently writes about the intersection of popular culture and Jewish themes for the Forward.