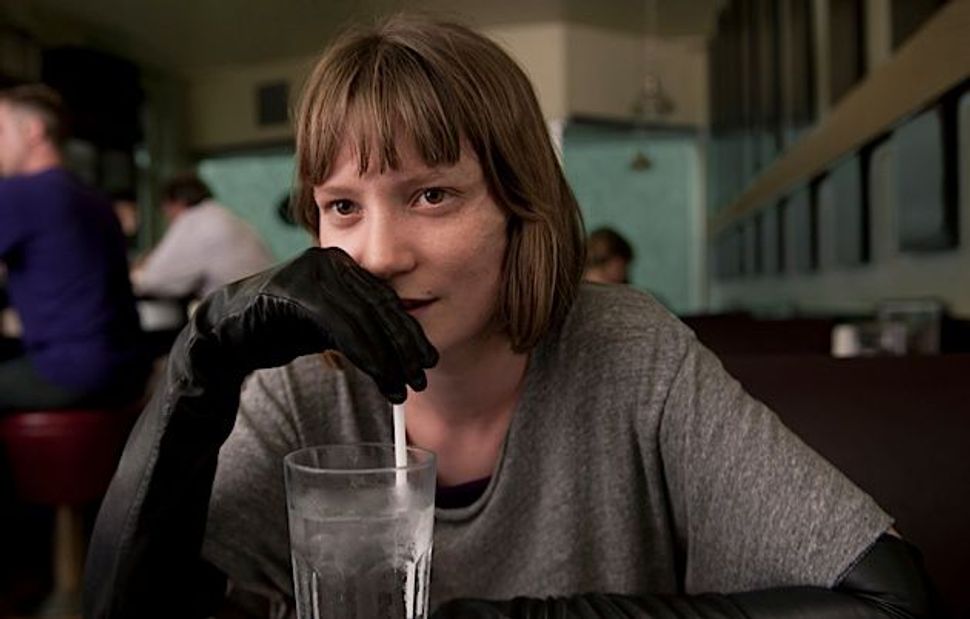 First it’s Cammy, a girl with non-Hodgkin’s lymphoma whom he met in a hospital on a “Make a Wish”-type visit, and who shows up outside of his bedroom wearing a spectral bridal dress. Then it’s Micah, a toddler who drowned in a swimming pool, and who tags along with Cammy like a lost little brother. Benjie tries to get help from his shrink, but the ghosts show up anyway.

Benjie isn’t the only character visited by the dead. Havana Segrand, an aging actress played with high-wire aplomb by Julianne Moore, also suffers from unwanted guests. In this case it’s her mother, the actress Clarice Taggart (Sarah Gadon), who died in a fire when Havana was young and whom Havana believes molested her as a child. She appears in the bathtub in Havana’s house, taunting her daughter: “Did you think it would be like ‘The Sixth Sense’?”

In fact, “Maps to the Stars” isn’t like “The Sixth Sense,” although it is a kind of ghost story. Like many Cronenberg movies, its horrors lie on the surface, though its most disturbing effects are difficult to explain. Yet it’s strange that Cronenberg — a director usually identified with the “body horror” school of filmmaking — would want to make a ghost story at all.

In a 2005 interview with The New York Times Magazine, Cronenberg described how he had been offered the chance to direct “Dark Water,” an American remake of a 2002 Japanese horror film, but turned it down because of the movie’s supernatural elements. “I don’t do demons,” he told the Times. “I’m an atheist… I’m not just a nonbeliever, I’m an antibeliever… The movie posits that ghosts do exist. That suggests that there is some kind of after life. I’m philosophically opposed to that view.”

Instead, Cronenberg’s films have been driven by the grotesqueries of physical existence, and the inability to separate consciousness from the physical plane. In movies like “The Fly,” which depicts a scientist who accidentally fuses his genes with those of an insect, and “eXistenZ,” about a video game system connected organically to players through “bio-ports,” he shows how our sense of reality depends on physical processes that can become warped to horrifying degrees.

But there’s more than just gore to Cronenberg’s method. In the same interview with The Times Magazine he explained that while he doesn’t believe in the supernatural, he is affected by different kinds of ghosts. “I can hear their voices in my head,” he said of his deceased parents. “To explore that kind of haunting — that I can do. That’s interesting to me.” And his latest movie, though light on the gross-out factor, is heavy on repressed trauma.

“Maps to the Stars” takes its name from kitschy “Star Maps” that purport to show Hollywood tourists where celebrities live. It also alludes to something bigger: a map to our place in the universe. But just as Star Maps are a bankrupt fantasy — they won’t guide anyone to any real celebrities, as we hear at the beginning of the film — so too, the idea of charting a path in the heavens is a sham. Cronenberg has called himself a “card-carrying existentialist,” and here he shows his skepticism toward the possibility of transcending our terrestrial selves.

The movie depicts a small constellation of characters that are all connected to one another through family or professional relationships: Havana, an actress desperately trying to land the same role her mother played in a remake of a black-and-white classic called “Stolen Waters”; her therapist, Stafford Weiss (John Cusack), a celebrity quack and TV personality, and his son, Benjie (Evan Bird), star of the “Bad Babysitter” franchise and already a recovering addict at 13.

The most sympathetic and disturbing character in the movie is Agatha Weiss (Mia Wasikowska), who shows up at the beginning riding into town aboard a Greyhound bus. No sooner does she arrive in Los Angeles than she hires James (Robert Pattinson), a limo driver and aspiring actor, to take her back to her childhood home, which she tried to burn down years before. Now, after living in an institution for most of her life, she has returned to reconnect with her past. And thanks to Carrie Fisher, whom she befriended on Twitter, she lands a job as personal assistant to Havana Segrand.

On one level, “Maps to the Stars” is a satire of Hollywood pathologies and dysfunctions, in the same vein as movies like “Sunset Boulevard” or “The Player.” These are best embodied by Havana, who is by turns desperate and terrifying, cruel and pathetic. She quizzes Agatha about her love life while sitting constipated and farting on the toilet, and later upbraids her for a subpar job performance. When she loses her prized role to another actress, we watch her pretend she never wanted the part to begin with, only to express undisguised glee when her competitor withdraws because of her son’s death.

Other characters in the movie are similarly abhorrent. Benjie is a kid who got too rich and too famous too quickly, and who now treats other people with contempt. At the beginning of the movie, just after he has visited Cammy and asked her how she got AIDS, he berates his long-suffering agent for taking him to a kid who only has non-Hodgkin’s lymphoma. Later we see him shoot his friend’s dog after breaking his sobriety and, in a delusional fit, almost strangle his “Bad Babysitter” co-star to death. One could view him as a victim of his own circumstances, but it’s hard to feel sorry for such a tyrant.

“Maps to the Stars” is more than just a Hollywood satire, however, and if it were just that it would be nothing special. Nor is it a straightforward ghost story, though that aspect is there as well. In fact, none of the elements in the movie define it as a whole, not even what turns into a creepy sexual subplot. Rather, “Maps to the Stars” is a potent horror flick precisely because its unease is so difficult to pinpoint.

As in a lot of Cronenberg’s movies, it’s obvious not only that something is wrong here, but also that the wrongness is pervasive. Hollywood may be superficial, but it’s not just the entertainment business that’s the problem. Rather, celebrity dysfunction is merely a name and a face for a more elemental disease. Even incest, which is always good for a shudder, only represents the horror lying under every surface. It just takes one wrong move for it to come rushing up.

Which is why “Maps to the Stars” isn’t really a ghost story at all, at least not in the conventional sense. Cronenberg’s movies aren’t about a fear of beings that come from outside of our world and threaten to break in. Rather, they’re about the horrifying things that are already present, and are just waiting to break out. And as he shows again here, that can be truly terrifying.