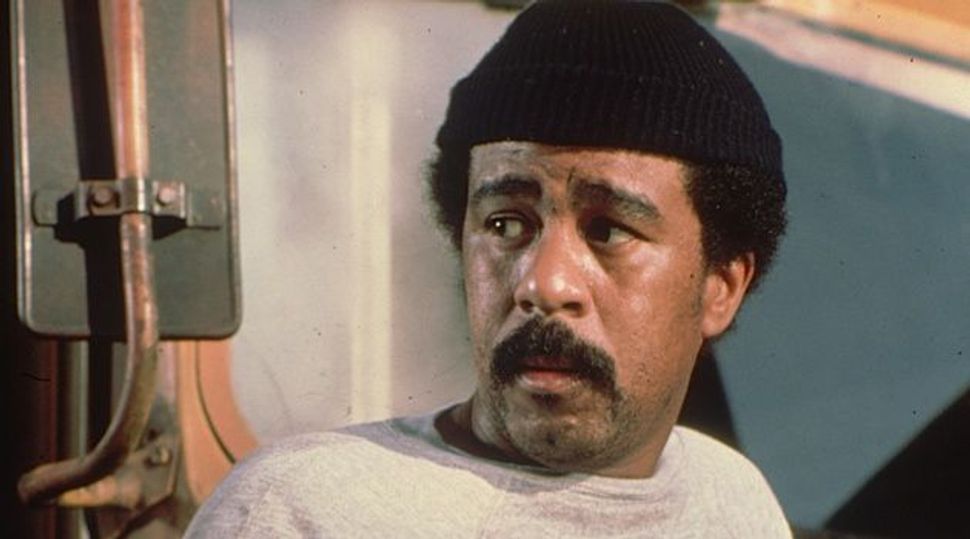 Richard Pryor’s personal history has already been relentlessly mined by numerous biographies as well as in the comedian’s stand-up acts and memoir. Still, Scott Saul’s new biography “Becoming Richard Pryor” adds a lot of new information. In his author’s note, Saul takes particular pride in exploring Pryor’s time in Berkeley where he claims to have reinvented himself. But it is Pryor’s connections to Jewish artistic collaborators (and lovers) that provide one of the book’s most intriguing themes. As Saul puts it, “[I]n his Hollywood career, Pryor was aided and abetted by a wide range of collaborators, mostly Jewish or black, who believed in his wayward talent and sometimes staked their credibility upon it.”

Pryor’s early comedy career in New York began in the company of many Jewish colleagues. Among them was filmmaker Henry Jaglom, whose friendship with Pryor became strained shortly after they attended a Q&A with “Dutchman” playwright and black civil rights activist Amiri Baraka (known as LeRoi Jones at the time). Manny Roth, owner of Café Wha? in Greenwich Village, had perhaps the biggest role in Pryor’s early comedy career: Roth established the venue in the mid-’50s and welcomed black theater artists into the roster from the beginning (and also offered Bob Dylan some of his first gigs in the city).

Saul also highlights several of Pryor’s relationships with Jewish women. He writes of Maxine Silverman, whom he describes as an “Audrey Hepburn lookalike,” who lived with Pryor before he had divorced his first wife Patricia Price. Both Pryor and Silverman came from abusive homes and they fought frequently. Pryor and Silverman had a child together — Elizabeth Ann Pryor — but Pryor’s cavalier approach to parenting ultimately doomed the relationship. As Saul writes, “By splitting the first two weeks of their child’s life between a Tijuana brothel and a San Diego jail, Richard had done an unparalleled job of demonstrating his unfitness for parenthood, and Maxine made him leave their Beverly Hills home.”

For two years, Pryor was married to the Jewish go-go dancer Shelley Bonis. At one point, Pryor decided to use money he and Bonis received from her parents as a wedding present to help fund his dream black power movie, a screenplay that would later become the Huey Newton-inspired (and long-lost) “Uncle Tom’s Fairy Tales.”

The film, Saul writes, “depended, in material terms, on the white wife he cheated on and, behind her, on the white in-laws who regarded him with suspicion. If that irony weren’t rich enough: Herb had earned the money as the personal manager of Danny Kaye, the effervescent Jewish comedian who came up from the Borscht Belt, and who had made his stage debut Jolson-style, in blackface, in his Brooklyn kindergarten’s production of ‘The Watermelon Fantasy.’”

Pryor and Bonis’s child, Rain Pryor, is also now an actress and comedienne whose solo show “Fried Chicken and Latkes” explores her identity as a black Jewish woman.

Two major Jewish stars played roles later in Pryor’s life: First, Milton Berle, who famously had an awkward appearance on “The Mike Douglas Show” alongside Pryor. A discussion of Berle’s illegitimate son, interrupted by Pryor with a series of jokes making light of it, turned into a sparring match symbolizing two very different types of comedy. “Berle,” writes Saul, “represented a generation of largely Jewish comics who, rooted in vaudeville, catered to mainstream audiences with routines that were wacky and physically witty but not topical or edgy.”

Mel Brooks also had a major role in bringing Richard Pryor’s comedy into Hollywood writing rooms, by hiring him as an advisor for “Blazing Saddles.”

“Becoming Richard Pryor” makes a point, several times, of assessing the divide between Pryor and the Jewish comedians and writers who composed the comedy and movie industry he joined.

Still, Saul writes, “While it would be wrong to underplay the tension Pryor felt toward many of them… it would be churlish to deny that they were crucial intercessors… By trusting in Pryor’s talent, they gave him a new platform, one often conceived with the brazen character of his stand-up in mind.”