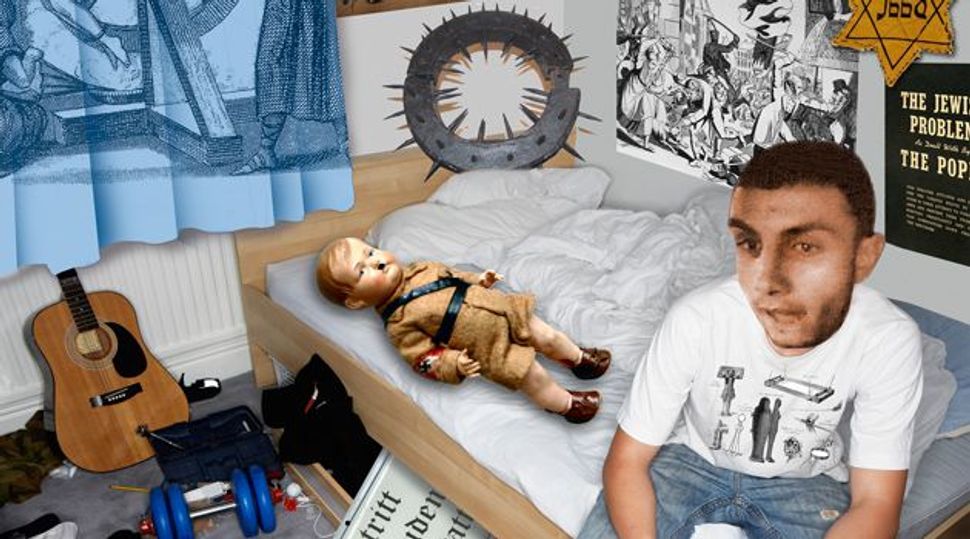 Kicking it Oldschool: Omar Abdel Hamid El-Hussein, shown here as a teenager growing up in Copenhagen, has always been a fan of the European classics. Image by nikki Casey

One of the hottest new trends in Europe is also one of the oldest — attacking Jews. And the energy driving this throwback can be traced to some of Europe’s newest residents, as Islamist immigrants from North Africa and the Middle East are taking up a tradition of their new home and making it their own.

“People say we’re refusing to integrate into Europe, but that’s not true at all,” said Copenhagen gunman Omar Abdel Hamid El-Hussein, in a Backward exclusive shortly before he was shot by police. “For me, I was always drawn to Europe for its promise of social security, equality of opportunity and deep-rooted anti-Semitism.”

El-Hussein added, before running off amidst gunshots and police sirens, that he was trying to bring back the traditions he loved best.

“The Inquisition, the pogroms, Hitler — those guys are my heroes,” he said.

El-Hussein and his fellow extremists are part of a broader revival movement sweeping the continent.

“I’m taking inspiration from Walter Benjamin’s angel of history that shows that, as we hurtle into the future we must look to the past,” said Mustafa Kouachi, an essayist and fugitive co-conspirator in the Charlie Hebdo and Hyper Cacher attacks. “I’m a great fan of the Protestant iconoclasm of the 16th century — the Hebdo shootings were a form of homage to the Beeldenstorm.”

Kouachi argued that the innovations in recent attacks such as the shootings at the Jewish museum in Belgium lay not in their anti-Semitism but in the impulse to attack Jews for the sins of Israel rather than for stealing the blood of Christian babies, poisoning wells to spread the Black Death or failing to convert to the One True Faith.

“We’re pouring new wine into old glasses,” said Kouachi, “and then killing the vintner, for to consume alcohol is a sin against Allah.”

The revival has even spread to the Middle East, where the Islamic State, in a nod to the Crusades, has been conquering territory and slaughtering unbelievers in worship of a powerful and bloodthirsty God.

“Just like our mentors in European culture,” pointed out Kouachi, “we hope to go global.”